November 5th Revolution. How Does the FSB Do It?

Hundreds of supporters of the Artpodgotovka movement were arrested – such was a result of an operation conducted by the Russian special forces. The provocation’s aim (inspired by actions undertaken by Okhrana, a secret police force of the Russian Empire) was to single out the most radical opponents of the government who would be prone to use any violent methods. At the same time, the FSB can announce its success, as it managed to liquidate the “anti-state conspiracy”, which seems to be very important in the face of the growing strength of the competitive National Guard. The State Duma has recently registered a bill to extend its powers, many of which are already in the hands of the FSB. 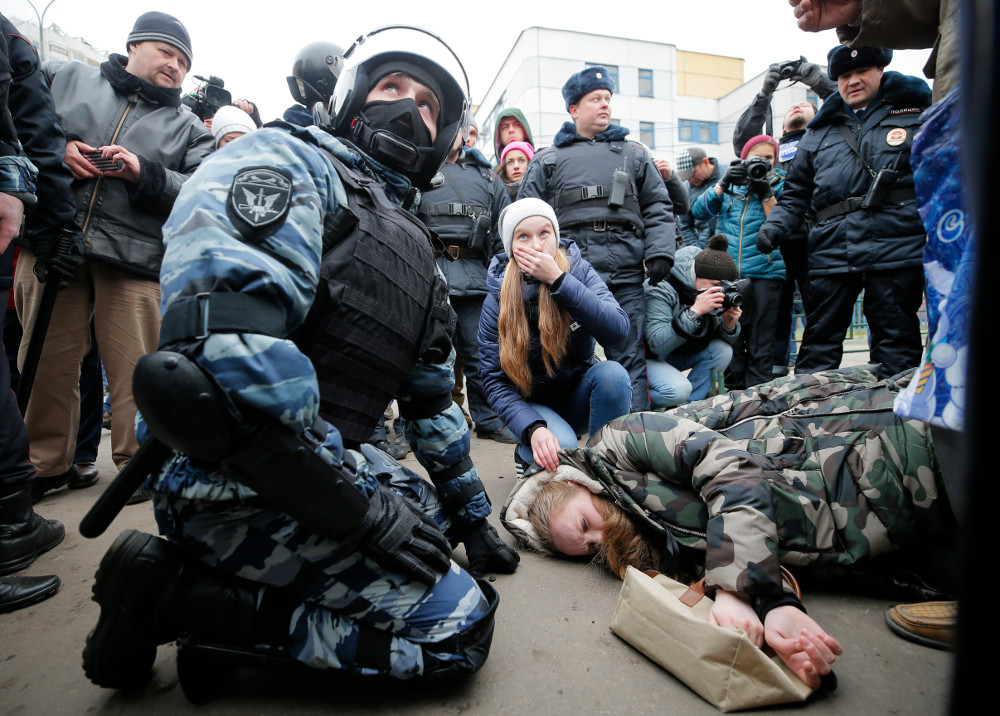 The security forces had stormed on November 3; as informed, they had detained in Moscow several members of the Artpodgotovka (Artillery Bombardment) nationalist “conspiracy cell”. This day, a total of 14 people were arrested in eight cities throughout Russia. They were told to be in possession of weapons and Molotov cocktails. According to the FSB, the group’s aim was to provoke mass riots by attacking administrative buildings and the police. On November 4, detentions were continued but the real “apogee” took place the next day, on November 5. That day, Artpodogotovka’s supporters gathered in Moscow in order to take part in an anti-government demonstration. More than 300 people were detained in the capital and 150 other demonstrators were arrested in other cities of Russia. They all have something in common as they gathered on the streets at the request of Vyacheslav Maltsev who considered himself as a nationalist and anarchist; moreover, he has called for a “people’s revolution” against Putin’s regime. It seems that he is either a deliberate FSB provocateur or he has only become its tool.

Maltsev is a former militiaman and a deputy of the Saratov Oblast Council. In 2013, he founded Artpodgotovka videoblog thanks to which he has rapidly gained popularity. It was when he announced the revolution. He even set an exact date: November 5, 2017. Since that time, he has been repeating that date in each episode of his videoblog. For four years. He has also gathered thousands of ardent supporters of the revolution, which was a titbit for the FSB. Perhaps it was only a provocation prepared from the very beginning by the FSB; however, it is more likely that the secret services had decided to use Maltsev’s extreme radicalism and popularity for their own purposes. Such a claim may be supported with the sequence of events and the consequences of the “conflict” with Artpodgotovka’s supporters. Until June, Maltsev has freely shared his viewpoints in the Internet; it needs to be added that many others would be imprisoned for offence under article on extremism. The investigation was launched in June whereas Maltsev fled to France without any difficulties only a month later. While applying for asylum, he continued to call for a revolution through his videoblog. On October 10, he was arrested by default by a court. On October 26, Artpodogotovka was officially banned. When did the authorities block the video? It was only on October 31. In addition, the authorities, which are usually quite effective in the censorship of the Internet, did not prevent anyone from sending thousands of e-mails from Maltsev’s mailbox (it is unknown whether it was him or the FSB who did that) to Artpodgotovka’s supporters to call them for preparing arms and Molotov cocktails, and to arrive in Moscow on November 5 to overthrow the regime. Those who responded to the call risked being imprisoned for many years. They rushed to the capital and fell into a trap as the FSB had been ready; To such an extent that some of the “revolutionaries” were stopped at the train stations after they barely got out of the train. In this way hundreds of rebels, mostly radical teenagers, could be detected. They constitute more serious threat to the government that the liberals of the big cities. It may happen that the FSB will scare and recruit some of them whereas a few of them will be imprisoned just to impress the public opinion. The action with Maltsev brought yet another advantage to the government. Many nationalists did not risk; that is why they did not participate in the traditional Russian March which took place on November 4. The authorities have also a new argument against the opposition; they consider them as bloodthirsty terrorists.

But there is one more thing about it as the issue is connected with the “clan battles” at the highest level. The “November 5th Revolution” case may be used against Chairman of the State Duma, Vyacheslav Volodin. Maltsev and Volodin have known each other since the time they were both politically active in Saratov. They were both deputy chairmans of the oblast council (Maltsev was a member of Putin’s United Russia Party). Once Volodin assumed an office in Moscow, he “used” Maltsev and his social movement to remove from power Dmitry Ajatskov, the long-time governor of the Saratov Oblast.