On the occasion of the centenary of the founding of Lenin’s secret police, the Cheka, the director of Russia’s FSB security service, its most direct heir, Alexander Bortnikov gave an interview to the state-run newspaper Rossiyskaya Gazeta. The vision of the history of the Chekist authorities according to the FSB director seems to explain the current views of Moscow’s elites in charge of a well-developed repression apparatus. Bortnikov has also taken advantage of strengthening the image of the FSB as an essential foundation of the Russian regime. 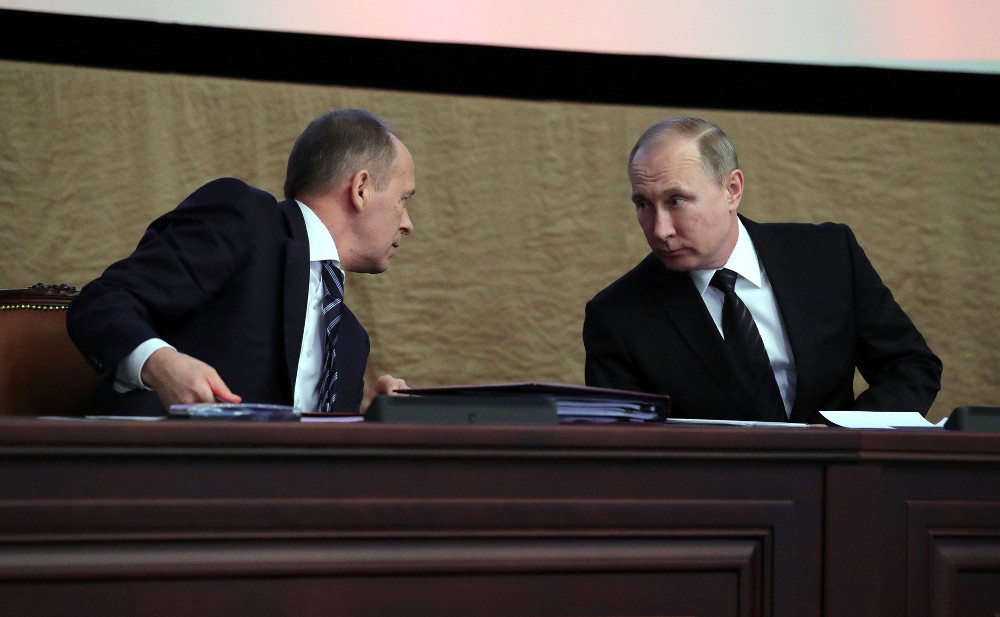 The Federal Security Service constitutes the next incarnation of the Cheka, established in 1917, similarly to such services as the KGB, the MGB, the NKVD and the GPU. Thus, Bortnikov’s words seem to confirm the aforementioned claim. During Putin’s rule in the KGB, the Chekist tradition is cherished openly whereas the Soviet period of security service is still praised by many people. However, no other head of the security service has glorified the crimes of that period to such extent.

According to Bortnikov, thanks to the All-Russian Emergency Commission for Combating Counter-Revolution and Sabotage (the Cheka), established in December 1917, it was possible to manage the country under war conditions. In his opinion, the Cheka was the answer to chaos and threats from foreign services, “terrorist, bandit and white-emigrant organizations.” The problem is that Bortnikov has reversed the order of events. Because the Cheka had first come into existence and then the terror was unleashed while the civil war broke out only afterwards. Bortnikov has also justified the Great Terror in the 1930s. Contrary to some obvious facts, he claimed that there had been some real plans to remove, and even kill Joseph Stalin, while the conspirators had had connections with foreign intelligence services. Many of them would belong to the party nomenclature and security apparatus. Interestingly, the current FSB chief has praised the activities of the Lubyanka governed by Yuri Andropov. It has been known for a long time that he was admired by Putin. Moreover, Bortnikov has said about the greater openness of the KGB during the Andropov era, which was manifested even by the opening of archives. It is not true. The KGB of those times tightened repression towards dissidents; in addition, it was extremely aggressive in the international arena for example by supporting Palestinian terrorists.

Bortnikov complains that during Perestroika, the leadership of the party did not allow the KGB to investigate agents recruited by foreign agencies working in the authorities (there was a rule that the KGB was not entitled to undermine the CPSU). The current head of the FSB claimed that such a state of affairs caused that the Lubyanka had ceased to trust the authorities, which eventually had brought about a disaster. It was only during Putin’s rule that the true strength of the Lubyanka had been rebuilt. Bortnikov assured that the FSB did not remain under any political influence and it did not support any party or group interests. It constitutes yet another lie as one may recall the case of Alexey Ulukayev when Igor Sechin took advantage of his influence within the FSB structures so as to remove the minister whose trial has already ended with a judgment of conviction.

By the way, Bortnikov has been running his own game. Listing all the successes of his service (“as a result of the steps taken over the last six years, the number of terrorist offences committed in Russia has declined ten times” and “the bandit underground of the North Caucasus has been completely eliminated”), the current FSB chief has shown that for the Kremlin Lubyanka is an indispensable tool to maintain control over the country. This is important in the context of the quiet rivalry of this service with the National Guard, created one and a half years ago, for the title of the most important force structure for both Putin and the state security. Judging on the full content of the interview, it can be concluded that the modern FSB, like the Cheka, intends to fight against “counterrevolution” and “foreign services” with increasingly brutal methods (and especially the words justifying Stalin’s purges should be alarming for the current elite), however with the use of tools characteristic for the modern era.