Russian media have reported about 1,500 political prisoners in Ukraine

Russian media quoted the president of the Union of Political Emigrants and Political Prisoners of Ukraine, Larisa Shesler, according to whom, about 1,500 people in Ukraine have been arrested for political reasons. Shesler has claimed that the number of Ukrainian citizens exposed to persecution may be higher, as many of them are afraid to inform that some of their relatives have been imprisoned for political reasons. 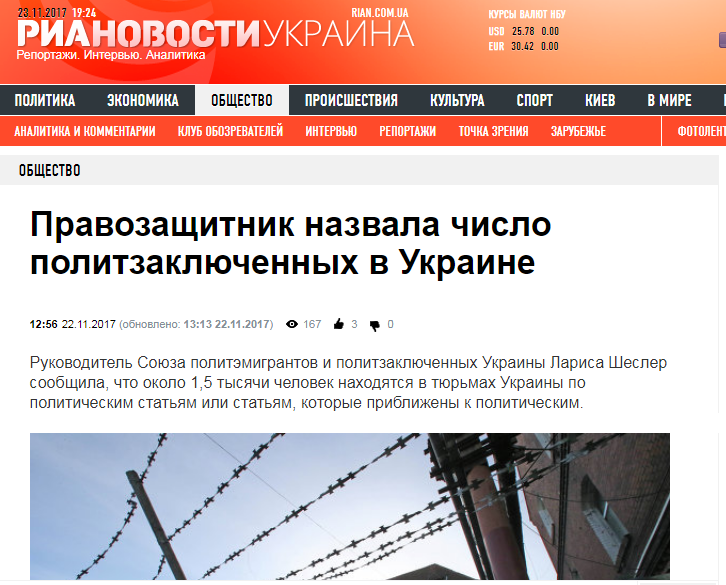 Website of the RIA Novosti agency [https://rian.com.ua/], access: 11/23/2017. The agency informs: “Human rights defenders have determined the number of political prisoners in

“According to our information, about 1,500 people are currently in prisons in Ukraine for political reasons or those that are in fact close to the political ones”, she said. It basically means that these people are accused of criminal offences but in fact it is all about political repression. Among them, there are hundreds of people in Kharkov, Kherson, Odessa and Mykolaiv. “They all are in penal institutions”, Shesler said at a press conference, which took place on November 22 in a Moscow-based agency, Russia Today. She also added that, contrary to what many Russians and Western European may think, political repression in Ukraine is not directed against Poroshenko’s political rivals but against all those who think differently.

On the same day, a Moscow conference was held by Mykola Azarov, former Prime Minister of Ukraine associated with Yanukovych’s team. He declared that Kiev’s Maidan had raised “social scum” to the top of power. At the same time, he accused Euromaidan leaders, including Andriy Parubiy, the current Chairman of the Verkhovna Rada, of being responsible for shooting to the defenceless protesters in February 2014. 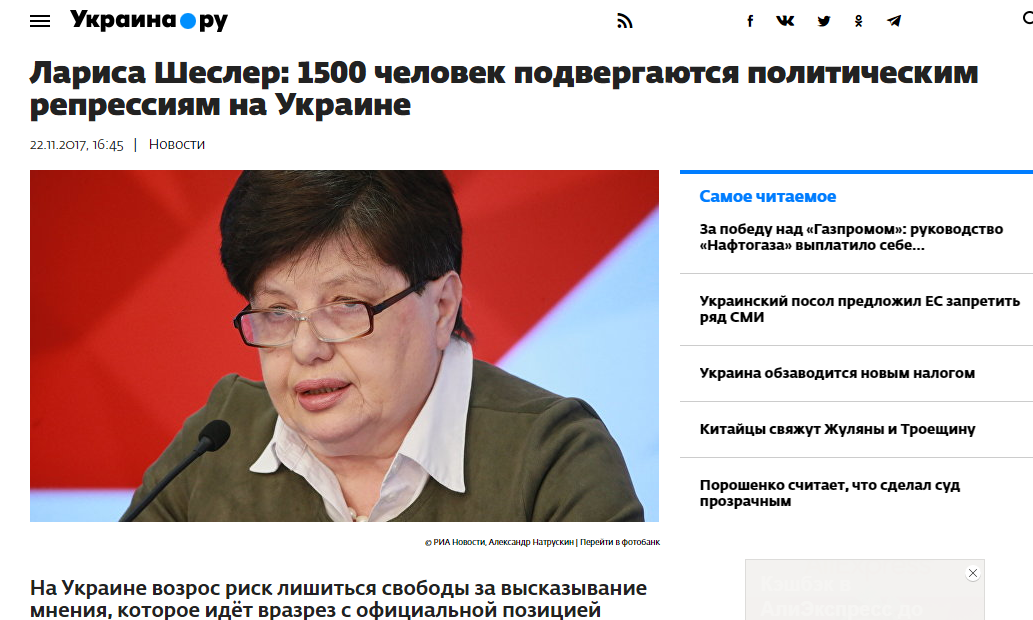 ukraina.ru website, access: 11/23/2017. The portal quotes Larisa Shesler, according to whom 1,500 Ukrainian people are subject to political repression in their country.

It should be noted that both conferences, where absurd charges against the authorities of Ukraine were presented, were organized the day after the fourth anniversary of Kiev protests, known as the Revolution of Dignity. It is celebrated in Ukraine as the Day of Dignity and Freedom. Possibly, both speeches had been planned by the Russian authorities, where both Shesler and Azarov currently live. Azarov, as well as Larisa Shesler (the latter is called by RIA Novosti agency as a “human rights defender”), sheltered in Russia in 2014. Wanted by Ukraine’s Ministry of Interior, Shesler is suspected of committing offence contrary to Art. 110 of the Criminal Code of Ukraine referring to any activity against the territorial integrity of Ukraine and crime of incitement to religious and national hatred. Mykola Azarov is on Interpol’s wanted list since January 2015 when the institution issued the international arrest warrant.