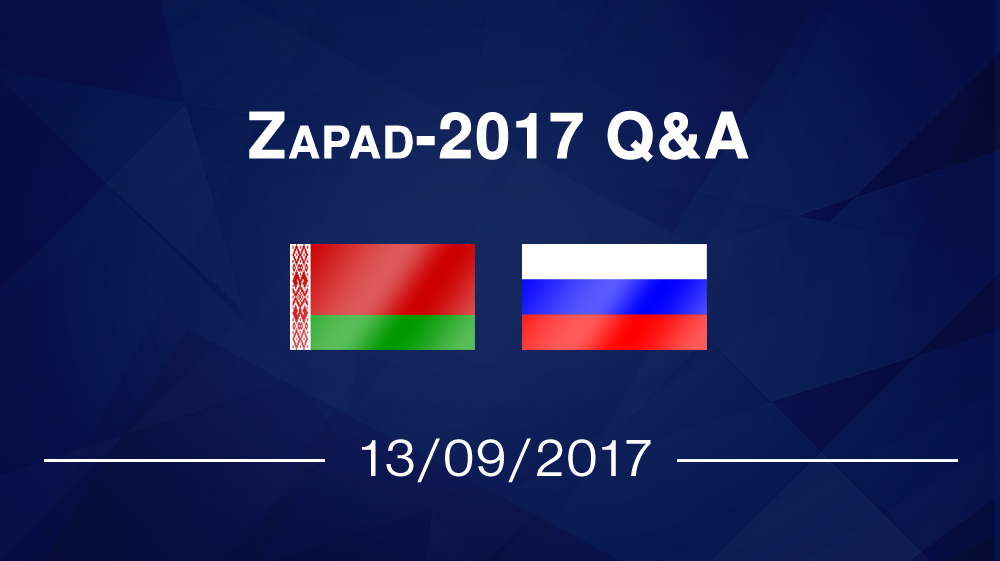 WHAT IS THE ZAPAD-2017 MILITARY EXERCISE?

The Zapad-2017 military drills fulfill two functions at the same time. On one hand, they constitute a traditional joint Russian-Belarusian exercise within the framework of the regional military group, held alternately in Russia and Belarus every two years. On the other hand, Zapad-2017 is annual military drills of the Russian Armed Forces, which take place on one of the four strategic directions. A year ago it was the southern one, within the framework of Caucasus-2016 exercises. Previously such military activities as Centre-2015, Vostok-2014 and Zapad-2013 were performed.

In fact, Zapad-2017 comprises not only exercise planned for 14–20 September 2017 in nine proving grounds in Belarus and Russia but it constitutes also a range of events such as numerous trainings, unannounced readiness tests, troops deployment shifts as well as full-time tactical exercise held in other regions of Russia. Actually, the Zapad-2017 drills started in the spring when armed forces had tested their military units which were later supposed to be used in September, during the critical stage of the project.

WHO WILL TAKE PART IN EXERCISE?

The Zapad-2017 drills’ plan will be implemented by the units of the regional military group, namely the Belarusian Armed Forces and Russia’s 1st Guards Tank Army (along with its two major tactical units, that is the elite 4th Guards Kantemirovskaya Tank Division and he 2nd Guards Motor Rifle ‘Tamanskaya’ Division). In addition, some of the Zapad-2017 activities will be performed by the units of the entire Western Military District.

WHERE WILL THE EXERCISE BE HELD?

The Zapad-2017 drills will take place on six Belarusian proving grounds and three Russian ones. In Belarus, four general training fields will be used along with two air force and airborne training areas.

Additionally, more exercise will be held in two locations in the Vitebsk Oblast, namely near towns of Glubokoye and Dretun. As for proving grounds in Russia, they will comprise those of Strugi Krasnye (Pskov Oblast), Luga (Leningrad Oblast) and Prawdinsk (Kaliningrad Oblast). 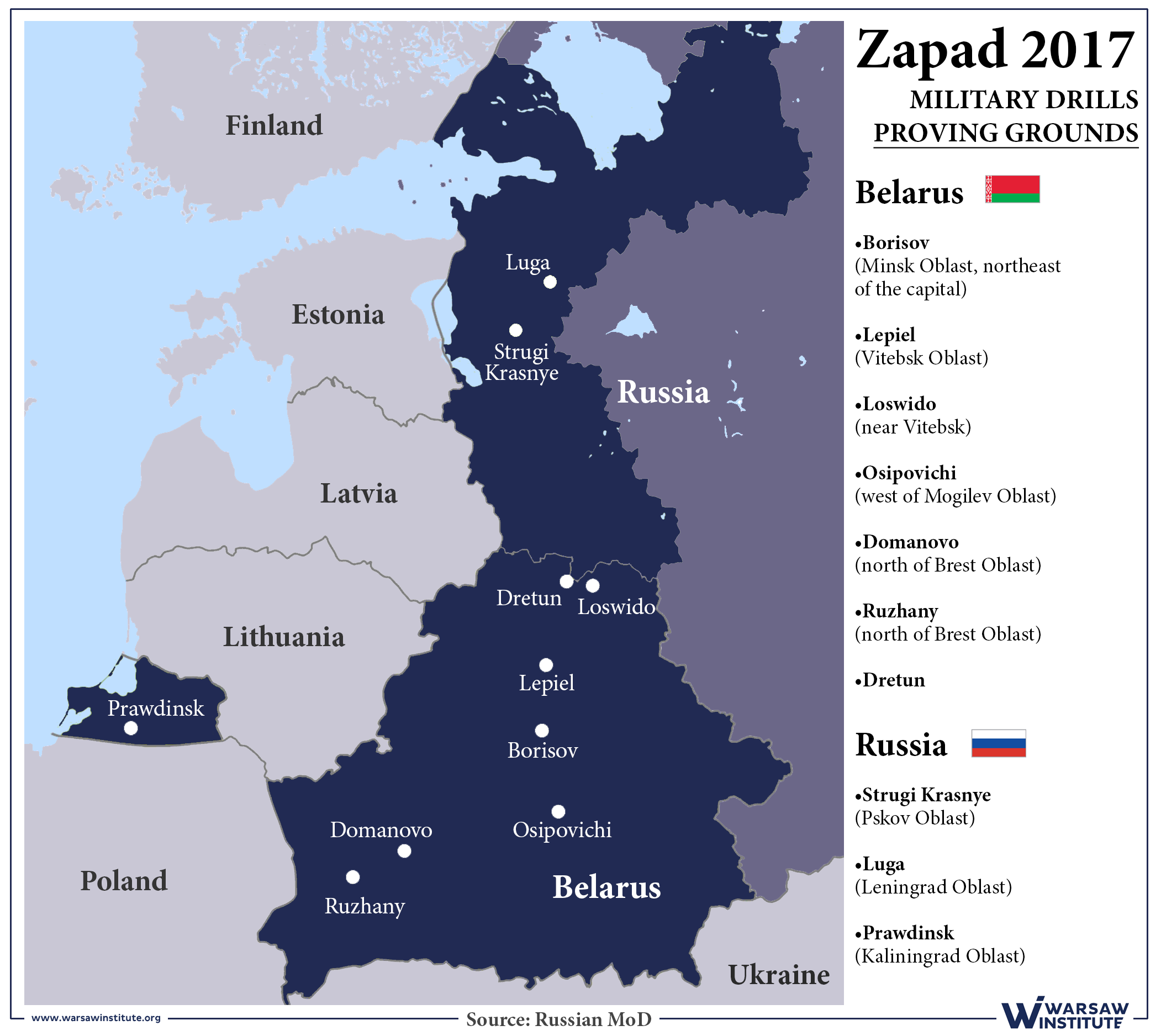 Maneuvers will consist of two stages expected to last more than a week (14-20 September) with some crucial drills taking place on Belarusian proving grounds. According to the official exercise’s scenario, Belarus, supported by Russia (Northern States) will defend themselves against the aggressions of three fictitious countries: Veyshnoria, Lubenia and Vesbaria (Coalition of Concerned States).

Lubenia is a northeast part of Poland and the southwest one of Lithuania, including the Suwalki Corridor. Vesbaria comprises the rest of Lithuania and the central part of Latvia. However, it is Veyshnoria that seems the most interesting since it suggests a separatism in Belarus; this fictitious state occupies a northwest part of Grodno Oblast, Minsk Oblast and Vitebsk Oblast, that is territories of Belarus with Roman Catholic as a major religion.

According to the scenario, territories of Belarus and Kaliningrad Oblast are invaded by some extremist groups from Veyshnoria whose aim is to commit some terror acts and to destabilise the situation. The exercise will consist of two stages. The first, supposed to last three days, will deal with an isolation of the areas occupied by enemy forces as well as will be supposed to deliver air defence to protect important state buildings. The second stage is the implementation of the combat tasks related to the deterrence of the opponent (four days).

WHAT WILL BE PRACTISED BY THE RUSSIANS AND THE BELARUSIANS?

WHAT ARE THE AIMS OF THE EXERCISE?

Officially, the Zapad-2017 will raise the general level of preparation and combat readiness of the armed forces of the Union State. Thus, the exercise will test the level of the integration of conventional, nuclear and non-military capabilities of Russia in order to influence the decision-making process of the enemy (also referred as “strategic deterrence”).

Similarly as in the case of the exercise held in the spring and in the summer, Russia will again test its ability to deploy and command military units of various types in joint exercise (airborne forces, GRU spetsnaz and electronic warfare army units).  Such an exercise will be an opportunity to test Russia’s combat abilities of numerous new formations and units that have been created over last four years.

The goal of the maneuvers will be also to verify the level of cooperation between divisions and armament systems as well as to test joint structures of Command & Control (C2) and planning. For assets located in Kaliningrad it will be an important test of the A2/AD (anti-access/anti-denial) tactics.

On the occasion of the maneuvers in Belarus, new logistical centres will be constructed. Military bases, where fuel and amunition will be stocked, may remain on that territory and thus facilitate possible military actions against Ukraine. Even if Russian troops or their infrastructure will not remain there, Russia will get to know the area, which will help the country to prepare possible scenarios for future use of the Belarusian territory for any actions against its neighbours.

The fact that Russian troops will be withdrawn once the exercise is finished, will not mean that Russia’s military potential will not be shifted towards the West in a significant way. Additional weapons and troops deployed in Kaliningrad Oblast may stay there on a permanent basis, as well as units stationing in western parts of Russia, that is Murmansk and Karelia, Leningrad Oblast, Pskov Oblast, Smolensk Oblast and regions in the southwest part of the country, between Donbass and the Caucasus.

HOW MANY TROOPS WILL PARTICIPATE?

According to official data presented by Russia and Belarus, 12,700 soldiers will take part, of which 10,200 will be deployed on the territory of Belarus (7,200 Belarusian troops and 3,000 Russian ones) along with 680 units of military equipment.  Officially, Moscow has mentioned 70 aircrafts and helicopters, about 250 tanks, 200 artillery units of all types (including barrel artillery, rocket missiles and mortars) and 10 naval vessels.

In fact, even more than 100,000 troops may be involved in the drills. They include all military personnel, as well as those of civilians and power structures, engaged not only in the exercise planned for 14-20 September in Belarus and Kaliningrad Oblast but also troops taking part in other military drills held in other parts of Russia at the same time. Those exercise has nothing to do with Zapad-2017, however, they are perfectly coordinated one with another.  In September, there will be some exercise of almost all units in the Western Military District, namely in Kaliningrad, Leningrad, Pskov, Moscow, Bryansk and Voronezh Oblasts. In addition to the aforementioned forces, also the Baltic Fleet and the Northern Fleet will be involved in some military drills.

In parallel with Zapad-2017, an exercise of civil defence will be held; its aim will be to test the state’s (military and civilian elements) readiness to total war.  In Russia, operational groups of power ministries will participate in the drills, namely those of  the Ministry of Internal Affairs, FSB and the Ministry of  Emergency Situations. With total number of regular army units, internal and paramilitary formations, not only those actively involved in the exercise, the actual number of the Zapad-2017 participants may exceed 100,000 (not only on the nine proving grounds in Russia and Belarus).

WHAT SHOULD WE BE AFRAID OF?

However, the fact that Russia will use Zapad-2017 as the starting point for military operations, seems to be highly unlikely.  First, there is no mass informational campaign against a country being a potential target that would justify an attack. Secondly, it is not certain whether NATO and the United States will not react either they will provide a limited response to the issue. The risk seems to be much more important on the political level as well as in the light of media pressure than the one of armed conflict. There are other types of risks. It is likely that a lot of incidents may happen, for example instances of airspace violations.

WHAT THREATS TO BELARUS?

There is no evidence that Russians seek to stay in Belarus and annex its territory once the exercise is finished.  Its current infrastructure and logistics is rather temporary.   Russians are not able to repeat the “Crimean scenario”: 3,000 troops are not enough. Secondly, the annexation of Crimea had been prepared before it actually happened, “from the inside” (military bases of the Black Sea Fleet, numerous FSB and GRU agents, and various pro-Moscow organization among the Russian population). However, Belarus’s president Alexander Lukashenko has cared about power structures’ loyalty since a long time.

There are some other reasons why Zapad-2017 might be risky for Lukashenko.  Any Russian provocation and tension may aggravate relations between Belarus and Western countries, which has recently improved. It is impossible to predict Lukashenko’s reactions to Russian provocations that would increase tension with its neighbours, whose main victim would be Minsk and its foreign policy the country has led so far, which doesn’t mean good relations with Ukraine.

WHAT THREATS TO UKRAINE?

In parallel to the Zapad-2017 drills, Russia will conduct a range of various combat projects along its border with Ukraine. Since the beginning of the summer, Russia has been deploying its troops to Ukraine on a mass scale, even from such remote areas as West Siberia.  The great majority of these troops are directed not to the west, that is to Belarus and the Baltic states, but to the south, namely to Ukraine. However, Russia does not have at its disposal such forces at the borders with Ukraine to start an open war.

Nevertheless, no one can exclude instances of Russian provocation during the Zapad-2017 drills. For example, it can be a violation of Belarusian airspace by Russian aircrafts. If Ukrainian air defence opened fire to them, Moscow would accuse Kiev of the aggression against the Union State. Such a situation would appear to be difficult for Minsk since Lukashenko would have to take his position in the Russian-Ukrainian conflict (so far he has skilfully manoeuvred).

However, there is no risk that “little green men” will enter North Ukraine. Such a claim may be explained by the fact that in the oblasts located by the Belarusian border there are no pro-Russian attitudes nor a potential “fifth column”, which was used successfully used in the Crimea and in Donbass (however, in this case, the success was only partial). Nonetheless, an alleged threat of such an intervention may fuel anxiety or even panic in the Ukrainian society. Its aim is to demobilise and disorient both Ukrainian citizens and the authorities in Kiev, mostly by diverting attention from the real threats in the south and in the southeast.