On April 20, the flagship of Russian Pacific Fleet, a guided missile cruiser named Varyag, arrived in the capital of Philippines Manila, accompanied by a tanker Pechenga. 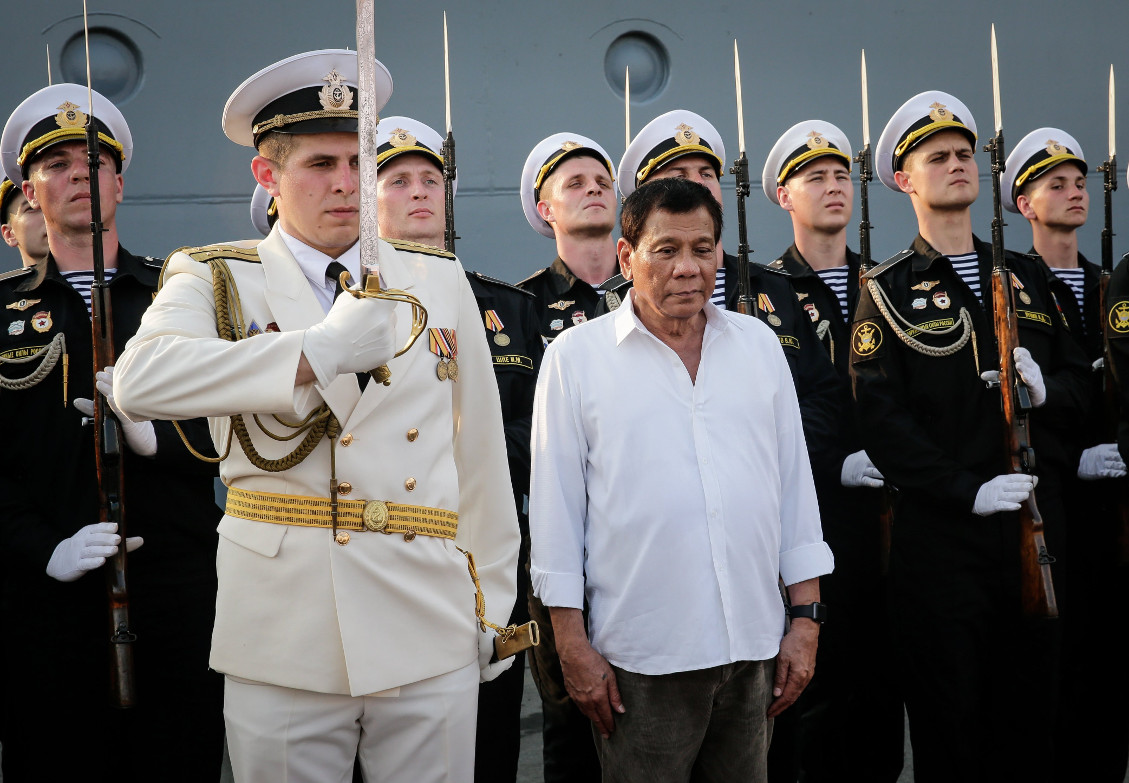 This isn’t the first visit of Russian war fleet in this Asian country, which shows a growing interest of Moscow in cooperation with this traditional US ally. Under President Rodrigo Duterte, the relations between Philippines and the USA have visibly deteriorated, and Filipino leader is openly seeking to forge closer ties with Russia and China. Duterte paid a “goodwill” visit on board of Varyag. Earlier, the ship commander had met with Vice-admiral Ronald Joseph Mercado, the Philippine Navy commander-in-chief. As declared by lieutenant colonel Alexey Ulyanenko, the four-day visit of his ship in Philippines is to strengthen the bilateral relations between the two countries. This has been already the second visit in three months of Russian war navy ships in the Philippines. On January 4, a Russian destroyer Admiral Tributs and a sea tanker Boris Butoma docked in Manila. At the time, President Duterte mentioned a possibility of joint maritime exercises with Russia.

After having hosted a meeting of ASEAN defense minters in April 2016 in Moscow, Russia has been increasingly active in the region. It’s been striving to intensify its cooperation not just with its old allies, such as Vietnam and Laos, and not only with Indonesia, but also with traditional US allies in the region, namely Thailand and the Philippines. Contacts with the latter have become particularly intense after Duterte was elected president in June 2016. He met Putin for the first time last November, at a regional summit in Peru. There Duterte informed Putin about his plans to distance himself from the US. The Philippines and the US are bound by a mutual defense treaty, concluded in 1951. Manila benefited from American assistance, among others, when quelling the Muslim rebellion at the south of the archipelago, and also in joint patrols of disputed areas of the South China Sea. Relations between the Philippines and the US soured significantly after the Americans had criticized the so called “death squads”, killing, on Duterte’s order, people allegedly involved in drug trafficking. After a US senator threatened Philippines with blocking the sale of 26 thousand of M-4 airsoft guns, the Filipino defense minister Delfin Lorenzana, went to Moscow, at the end of last year, to explore the possibilities to purchase arms there. The agreements are to be finalized shortly. Rodrigo Duterte, when announcing his visit to Moscow to take place on May 25, stated: ”Russia has assured me: We’ll have everything you need, just come here”. In the presence of presidents of both countries, bilateral agreements on defense related issues are to be signed. The Filipino president assigned the ministry of defense to explore the possibilities of getting modern military equipment from Russia, such as unmanned aircrafts, night observation equipment, sniper riffles and even helicopters. President is to be accompanied by general Oscar Taclao of Central Command of the Armed Arm Forces of the Philippines.