The Cult of Stalin Is Flourishing

The number of Russians praising Joseph Stalin publicly has been growing dramatically in recent years. New museums are being opened and new monuments are being unveiled around the country to commemorate this leader. In result of a strong historical policy pursued by the authorities, mythicizing the Soviet era, emphasizing the importance of leadership in Russian history, and glorifying the security apparatus as the foundation of the State, the crimes of the communist times fall in oblivion and the history of Moscow’s relations with its neighbors is written anew (this is visible in particular in the attacks against the Baltic states or Poland). Today, a majority of Russians see Stalin as a leader under whose command the Soviet Union together with the entire international coalition defeated Nazi Germany, not as a gloomy dictator whose atrocities against own nation were unprecedented. Such attitudes are accompanied by increasingly anti-western and chauvinistic sentiments. 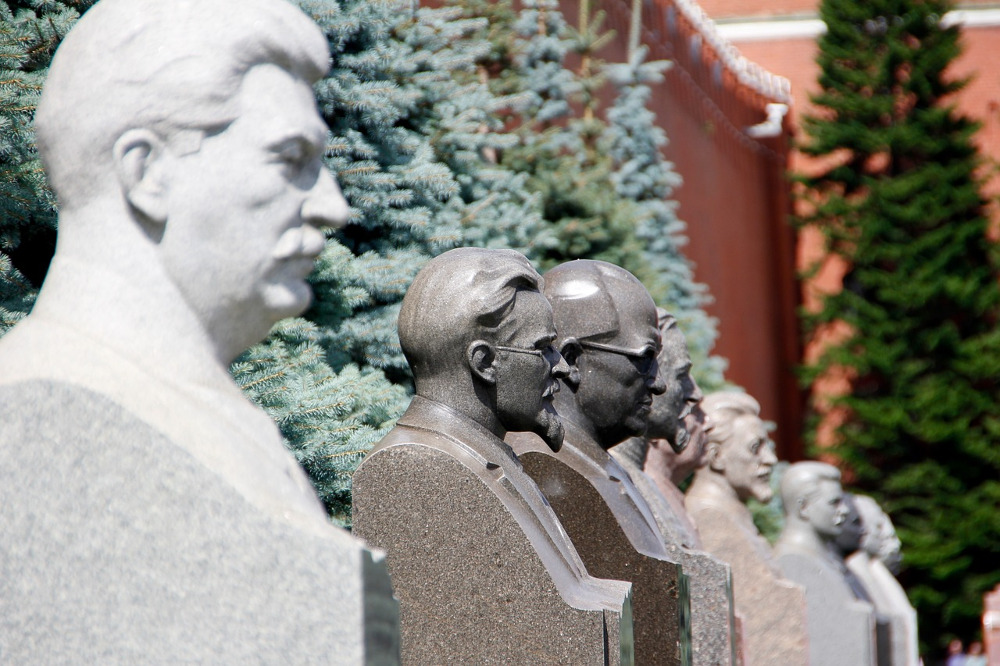 A series of bronze torsos representing Soviet leaders, including Vladimir Lenin and Joseph Stalin, have recently been unveiled in Moscow. On 22 September, seven busts of Soviet leaders in total were unveiled in the presence of the Minister of Culture and State Duma deputies. The seven sculptures joined 33 statutes of Russian pre-revolutionary leaders in the “Alley of Rulers”. Also Felix Dzerzhinsky museum returned to a village in the Kirov Oblast, where this leader of the Bolshevik revolt of 1917 and the creator of the red terror apparatus stayed on exile. The museum was opened officially to commemorate Dzerzhinsky’s 140th birthday anniversary. The opening was attended by State Duma deputies and by high-rank Federal Security Service (FSB) officials.

The most recent polls show a dangerous trend in assessing history – both internal and foreign policy issues. This is a result of Putin regime’s conscious policy – some uncomfortable facts are just not mentioned, others are distorted. Even though 57% of Russians have heard about the secret protocol to the Ribbentrop-Molotov Pact (some of them believe it was a “fake”), but only 11% are aware that on 17 September 1939 USSR invaded Poland. Notably, almost half of respondents positively assess the fact that Stalin signed a non-aggression pact with Nazi Germany. Only 17% condemn the pact. Still in 2010, Stalin’s agreement with the Nazis was viewed positively by 33%, which demonstrates the effects that historic policy instituted by Putin’s government has on public opinion. Anyway, when hosting Angela Merkel in May 2015, Putin himself justified the Ribbentrop-Molotov Pact.

The number of Russian who condemn crimes of the Stalin era keeps falling. The recent poll shows that for 56% of Russians Stalin’s merits outweigh his faults. In the past 10 years, the percentage of Russians who consider Stalinist repressions as a “crime that cannot be justified” has fallen almost twice: from 72% to 39%. It is particularly concerning that positive thinking about Stalin dominates among young people. Such assessment mostly results from the ignorance of the gloomy side of the Stalin’s rule. Around 40% of Russians know nothing or almost nothing about the terror of those days. Also the share of Russians who believe that this topic is unimportant and should not be talked about is growing. In recent years it has become evident that the figure of Stalin is getting more attractive and significant, which is a result of the government’s historical policy, which mythologizes the Soviet past (especially the period of Great Fatherland War) and implicitly sanctions the crimes committed by the State.