In its 12 years of operation, the Warsaw Uprising Museum has organized hundreds of concerts, lectures and workshops. It also organizes annual events accompanying the anniversary of the Warsaw Uprising. These activities serve as tribute to the insurgents – the people to whom it owes its existence. 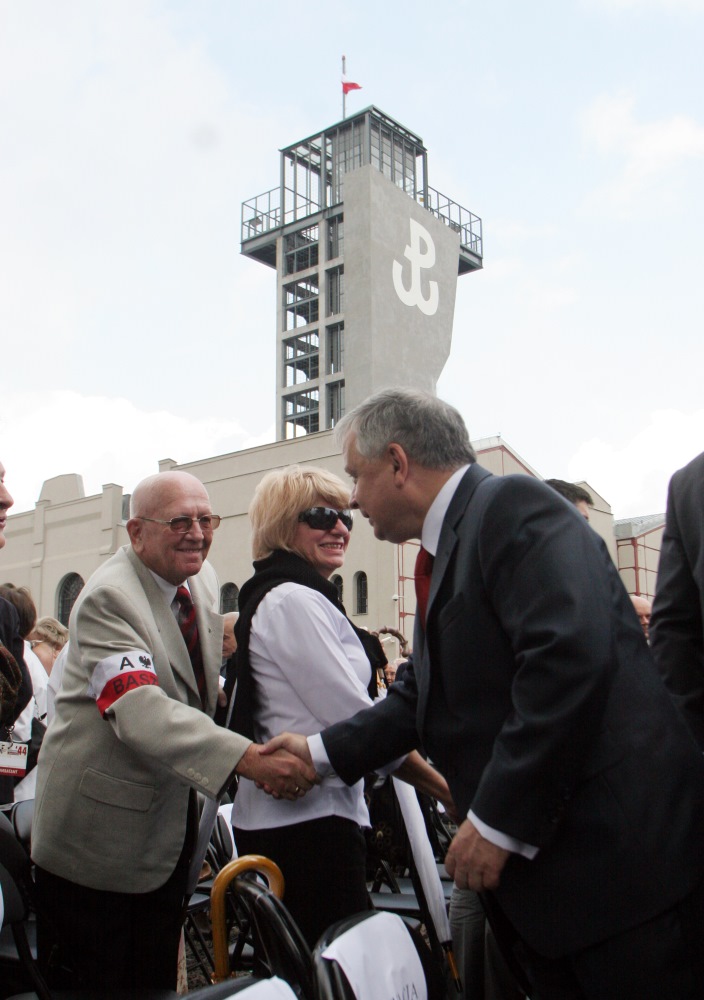 The Warsaw Uprising erupted on August 1, 1944 – the fifth year of the lengthy German occupation. Not only was it a fight for independence, but an express rejection of the violence of the occupation and the outcry of thousands of Varsovians wanting to put an end to the drawn-out war. Most of all, the insurgents joining the battle wanted to defend against the destruction of the values dearest to human life: patriotism, courage, honor, freedom, fidelity, integrity and friendship. The Warsaw Uprising ended after 63 days of heroic battle. Its idea has survived for over half a century, awaiting worthy commemoration in independent Poland.

After the war, for close to 50 years, the communist authorities tried to erase the memory of the Warsaw Uprising as the subject was taboo and forbidden in the public discourse. The one version of events accepted by the communist authorities was a premeditated falsification served to citizens. Soldiers and officers of the Home Army (AK), particularly in the first years after the war, were the victims of heavy repressions, which for many ended in death. The thaw of 1956 brought a certain reprieve, but the official line of the Polish United Worker’s Party (PZPR) maintained an unambiguously negative appraisal of the Uprising and its leaders. The first changes appeared during the “Solidarity” period. In 1981 the Social Committee for the Construction of the Warsaw Uprising Museum was formed. At the same time, artifacts from the Uprising began to be collected and an effort to find a building to house the museum got underway.

Only the fall of the regime in 1989 allowed for the full “rehabilitation” of the insurgents. The fiftieth anniversary commemoration of the Warsaw Uprising – the first in independent Poland – was especially important. The cornerstone to the construction of the museum was laid in 1994 in the building that once housed the insurgent redoubt by Bielańska Street (the former headquarters of the National Bank of Poland); however, the Warsaw Uprising Museum project did not really gain momentum until 2002. The newly-elected Mayor of Warsaw, Professor Lech Kaczyński, decided on the construction of the museum for the sixtieth anniversary of the outbreak of the Uprising. The site chosen would be the old trolley power station in Warsaw’s Wola district. The operation was managed by the Legal Representative for the Construction of the Warsaw Uprising Museum, and later its director, Jan Ołdakowski. The architectural design contest for the newly-forming museum was won by Kraków architect Wojciech Obtułowicz, while the exposition design contest was won by a team of architects including Mirosław Nizio, Jarosław Kłaput and Dariusz Kunowski.

The museum was opened in August 2004 – on the sixtieth anniversary of the outbreak of the Warsaw Uprising. It served as a visible tribute from the residents of Warsaw to everyone who fought and died in battle for the capital and for a free Poland.

At the opening of the museum on July 31, 2004, the Mayor of Warsaw, Lech Kaczyński said: “The Warsaw Uprising was the crowning effort of Polish independence actions in the first half of the Twentieth Century, and it was also the beginning. It was the beginning of a battle which through the second half of the 1940s, 1956, 1966, 1968, 1970, 1976, led to Solidarity.” Later in the speech, he said that the Warsaw Uprising Museum is a “tribute paid to all of the insurgents, leaders, soldiers and civilians, who supported the Uprising. It’s a tribute to the very decision to fight and is a tribute to how they fought, that they were probably the best soldiers in the thousand-year history of our nation, for their unparalleled heroism in battle as well as their military craft, their resistance, their toughness… It’s a tribute to all of those who died in battle in 1944 and in later years, for all of those who passed away in the sixty years since and for those who are with us today.”

Over the course of more than 12 years, the museum has become a dynamic cultural institution, active both culturally and socially, shaping the politics of memory and marking trends in education. By the end of 2016, over six million visitors had visited the museum’s exhibition, which contains close to 30,000 items in its collection.

The guiding idea of the exhibition was to depict the realities of insurgent Warsaw on many levels, with the aid of diverse media: photographs, films, information panels and modern multimedia solutions. The viewer is guided along the entire path of the exhibition by a skillfully constructed narrative, which aims to recreate the atmosphere in Warsaw during the Uprising. Interactivity with visitors is essential, so that they become active participants in the tour. This way, even after leaving the museum, the images left in their memory lead them to reflect on what they saw.

In the museum’s exhibition, the way that history is presented to youth is communicated in a particularly appealing way, through the application of a modern narrative with an emphasis on interactivity through sound effects, lights and scenographic elements.

The permanent exhibition is located on three floors totaling 3,000 square meters. It includes around 800 exhibit items, 1,500 photographs, and five hours of film material and sound recordings. Visitors are led through successive stages of the Uprising until the moment the insurgents abandon Warsaw and then their later fate.

The second part of the permanent exhibition is in Hall B, home to a full-scale reproduction of an American B-24 Liberator bomber. A sizable part of the exhibition is dedicated to Germany and its allies, where their operations in Warsaw are depicted based on official documents from the period as well as private reminiscences.

In Hall B you can also watch recordings of witness accounts of the Uprising, which come from the Oral History Archive of the Museum. The museum building includes an observation tower from which you can admire a panorama view of Warsaw, and the basement which includes a replica of the sewers used by insurgents during the Uprising.

An exceptional atmosphere dominates the museum, which is created by around 800 original artifacts from the Uprising; photographs, films and other multimedia. Short, catchy stories sharing the authentic, personal experiences of Insurgents are considered the best way to pass on the spirit of those events.

After the Virtual Museum, successive multimedia projects came into being. In 2010 the film City of Ruins (Miasto Ruin) premiered – a digital 3-D reconstruction of the flight of a Liberator over Warsaw in the spring of 1945. For the seventieth anniversary of the Uprising, the museum made the film Warsaw Uprising – the first non-fiction war drama in the world assembled entirely from original insurgent newsreels. The film was nominated for an Oscar.

Besides the aforementioned projects, the museum created several mobile applications, such as City’s Memory (Pamięć Miasta) and Architekturki – guidebooks to Warsaw’s memorials and architecture as well as a multimedia e-book for children titled Asiunia.

The museum is the main organizer of the anniversary events commemorating the Warsaw Uprising, which take place every year, from the end of July until October 2. Many events take place in this time frame: concerts as part of the series “We Remember ’44” (so far performers have included Lao Che, Apocalyptica, Voo Voo and Luxtorpeda), location-based games like “Your Photo from the Uprising”, Insurgent Critical Mass (bike ride) or popular sing-along concerts like “Not-Forbidden Songs” at Piłsudski Square. Besides this, the annual commemorations are accompanied by various patriotic events, of which one of the more important is the meeting between insurgents and the President of the Republic of Poland and the Mayor of Warsaw, which takes place in Freedom Park on the museum grounds.

The Warsaw Uprising Museum is full of life year-round as an active cultural institution. Several interesting events have been initiated, such as the Jan Rodowicz “Anoda” Award, presented to the “Insurgent in peacetime” for exceptional acts and heroic attitudes. Every year since 2006, the “Innocent Sorcerers” festival also takes place, which helps rediscover the atmosphere of pre-war Warsaw through concerts, exhibits, lectures and workshops.

Furthermore, the museum organizes outdoor exhibits in Poland and abroad. In 2014, along with the Topography of Terror Foundation, an exhibit was opened in Berlin, presenting the history of the Warsaw Uprising. In 2015, the museum honored the memory of the civilian victims, creating an exhibit in Warsaw Insurgent’s Park in the Wola district, presenting nearly 60,000 names of those murdered or who went missing during the Uprising. The exhibit continued in 2016 and was augmented with an online application, thanks to which anyone can update the personal data of their family members who were lost, killed or murdered during the Uprising.

One of the main pillars of the museum is its academic and educational activity. The Education Department offers a rich list of museum classes, in which over 300,000 students have thus far taken part. The History Department develops research programs for the museum, which include research projects in Poland and abroad tied to the history of World War II.

The Archives Department processes and catalogues the library and archival collections, stores and makes them accessible and conducts research related to the Warsaw Uprising in other institutions. The Oral History Department is a separate entity which conducts and stores interviews with witnesses, most of whom were insurgents and civilians. So far close to 4,000 interviews have been recorded and preserved.

The most important goal of the museum is to preserve the memory of the Warsaw Uprising. The Insurgent’s Room and the Volunteer Department, which takes care of contacts with former insurgents, have existed from the beginning. Every year hundreds of invitations for the museum’s anniversary events are sent to insurgents around the world.

On the occasion of the seventieth anniversary of the outbreak of the Warsaw Uprising, the insurgents passed on the so-called “Generational Baton” to representatives of the younger generation, which symbolizes the ideas and values which were being defended and fought for by the Warsaw insurgents. The youth representatives declared that they would build a world in which freedom, loyalty, courage, honor, integrity, friendship, tolerance, help to the weak and conscientiousness, would have a permanent presence.

We also remember the fallen heroes of the Warsaw Uprising. The names of over 11,000 soldiers, liaison officers and nurses killed in the Warsaw Uprising are visible on the Wall of Memory on the grounds of the museum. The museum tries to regularly revitalize places of memory and refurbish forgotten insurgents’ graves.

The Warsaw Uprising Museum came into existence at the initiative of President Lech Kaczyński and initiated the process which allowed for the construction of the Museum of the History of Polish Jews, Museum of the Cursed Soldiers in Ostrołęka, and many more. Thanks to the initiatives started by the President and the museum, Polish youth have taken a greater interest in history, tradition and patriotism. Moreover, rightful respect has been restored to the insurgents, civilians, cursed soldiers and other national heroes.