Defending the Information Space: the Lithuanian, Latvian and Estonian Example

The Baltic States are among the most experienced at developing tools for protecting against disinformation and propaganda. Their practices, related to counteracting the Kremlin’s information war, are very valuable and may provide a good example for the Western world, which must join efforts to combat the phenomenon of fake news. 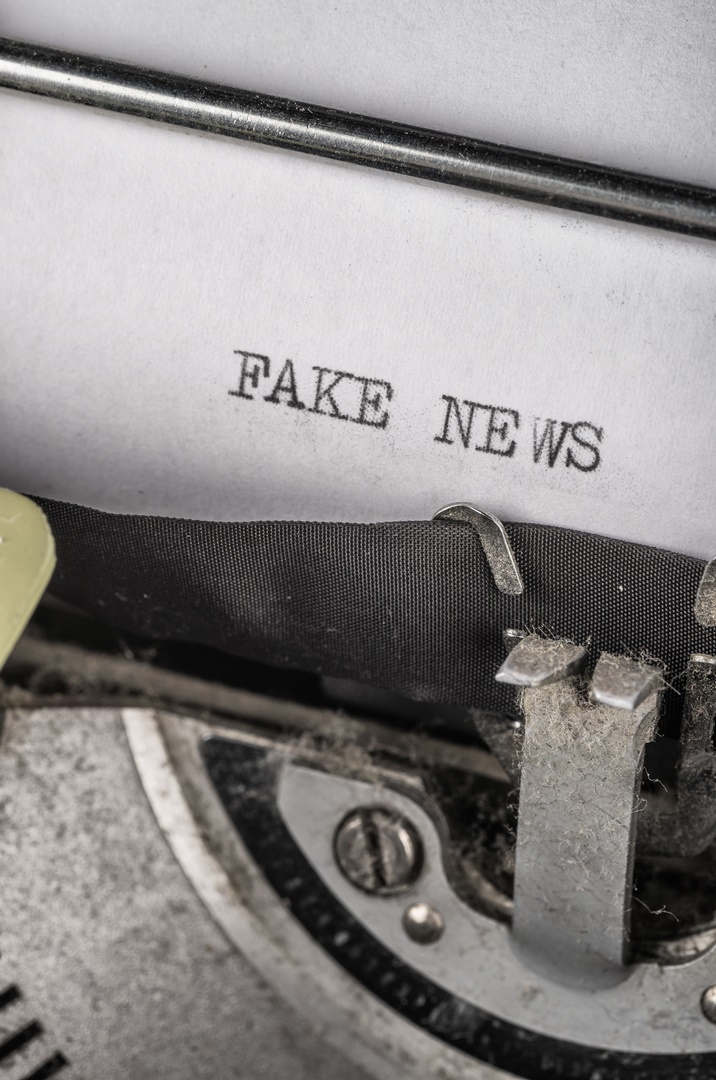 Among the various approaches to combatting hostile disinformation operations, the most important ones fall into three areas: limiting access to the Russian information space, counteractions by administrative and legal systems, and citizen activism online. Only part of the above arsenal of actions has short-term effects — most of them are calculated for the long run. The most difficult ventures to carry out are strategic ones, such as building appealing Russian-language media domestically or fighting Russian messaging at the state level. It is therefore worth looking at the various forms of anti-propaganda measures and their effectiveness, to evaluate examples of best practices.

In the Baltic states, television has the greatest impact on the majority of the population, which consists of Russian-speaking minorities. This is the result of the widespread knowledge of Russian and access to Russian channels from cable TV subscriptions offered by local service providers. Both Latvia and Lithuania have tried to solve this problem. Faced with charges of breaking local laws – broadcasting unauthorized political advertising or inciting ethnic hatred –  state authorities have imposed months-long broadcast bans for specific television channels. Although opinion polls in Latvia have shown that this idea is not universally supported by society,[1] the data collected in Lithuania are more optimistic. Thanks to the temporary bans, the popularity of Russian channels is steadily decreasing. In 2013, Russian programs were watched by 16% of viewers in Lithuania, and in 2016, according to a study conducted after the ban was lifted, the audience was reduced to 7%.[2] 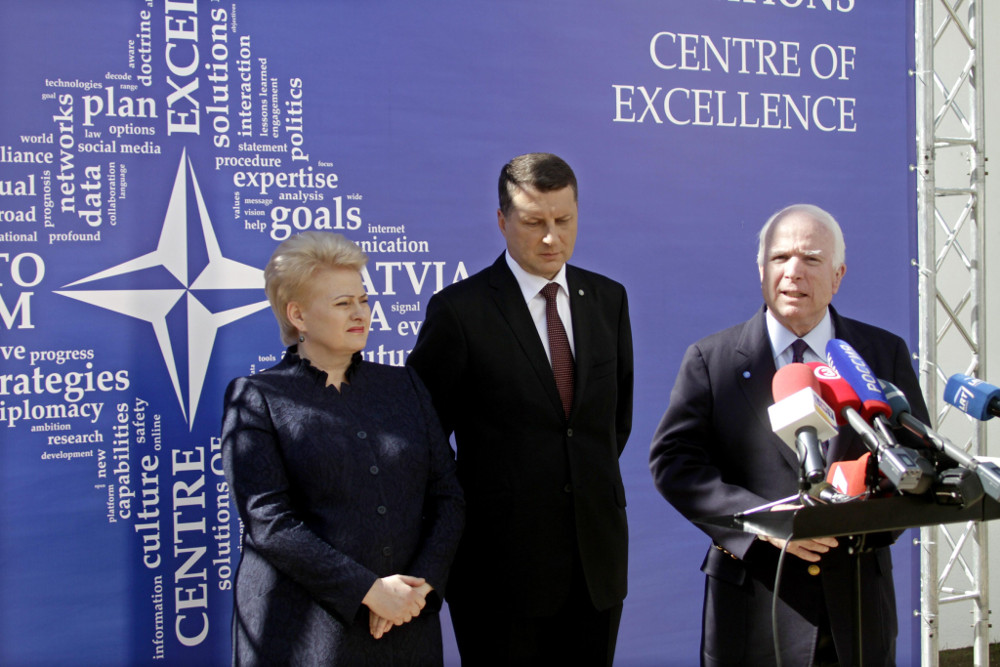 The disadvantage of such a solution is the time-consuming and complicated administrative procedure that suspends the broadcast of a particular foreign channel. This difficulty might be further aggravated after Brexit, as some companies rebroadcasting these Russian channels are registered in the United Kingdom. Legal actions against these companies during the “transition period” will require an even more complicated legal procedure than now. But even if the broadcaster moves to the EU, the Baltic states will still have to conduct complex legal battles with Russian television rebroadcasters.[3] 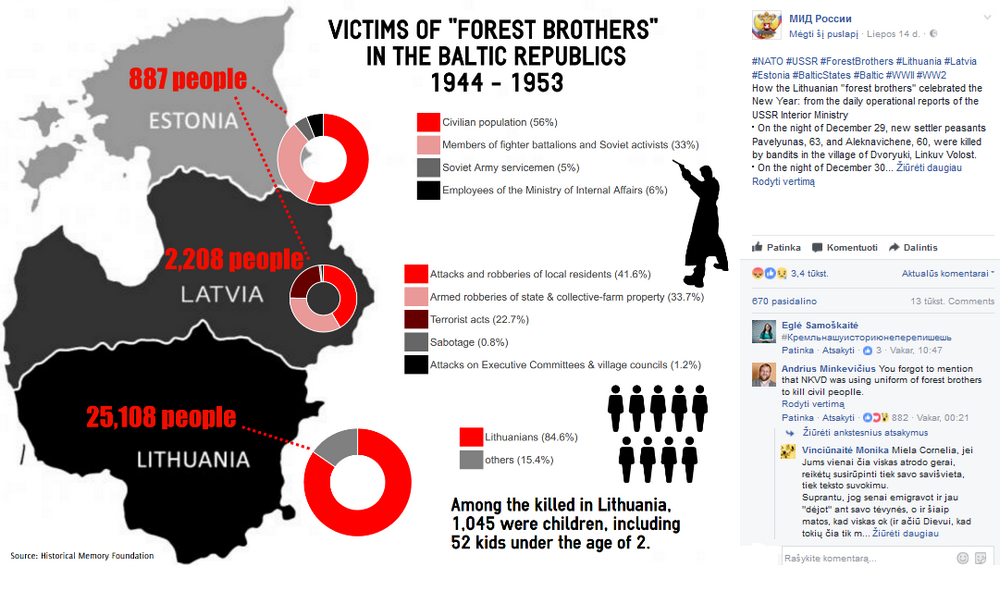 © facebook, Response of Lithuanian internet users against the manipulation of the Russian Ministry of Foreign Affairs published on Facebook. Among activists were people with a high level of influence.

The refusal to register the Latvian version of Sputnik on the .lv domain was symbolic and demonstrative. Sputnik’s Latvian website still works, but with the .com ending. Among journalists in the Baltic States, there was no illusion about the real purpose of the Sputnik project. The difficulties encountered by the creators of Estonian Sputnik prove this. Journalists who have been offered work there have usually turned it down.[4]

Involvement of state security institutions in long-term and planned counter-disinformation activities seems much more effective and less controversial. One of the key initiatives taken at the government level is the establishment of a special center under the auspices of NATO. The NATO Strategic Communications Centre of Excellence (NATO StratCom CoE), established in 2014, is a supra-regional analytical center aimed at addressing the latest challenges in information security. Not only the Baltic States, but also Poland, Germany, Italy and the United Kingdom, participate in this initiative. One of the main activities of StratCom CoE is to monitor Russian activity in the information sphere. The center analyzes the messages and directions of Kremlin propaganda, and also studies the latest technological developments used for spreading disinformation.

The main method of fighting Russian media disinformation is the active and responsible attitude of civil society. Spontaneously formed groups of volunteers, composed of pundits, journalists and ordinary citizens, are much more effective than formal structures set up by state institutions. The most famous group of Baltic internet activists is a Lithuanian group, which refers to itself as the “elves.” This is a group of volunteers who conduct activities online in their free time. Their work is a direct response to the actions of the lowest level, professional Russian propagandists, commonly referred to as “trolls.” The media spokesperson of the Lithuanian elves is Ričardas Savukynas,[5] a 43-year-old blogger and business consultant.

Elves primarily engage in reporting fraudulent accounts to forum and social media administrators. They are successful in discovering them by monitoring comments on information portals.[6] The activities of the Lithuanian elves gained popularity last fall, after they were given the spotlight by the (mostly Western) media. New groups of elves are being organized in other countries. Latvia also took up the initiative, where in March 2017, recruitment began to the local elven group.[7]

The effectiveness of grassroots initiatives in the fight against disinformation is illustrated by an online campaign launched by a Lithuanian publicist and journalist, Andrius Tapinas. In response to Russian distortions about the Baltic underground resistance to the Soviet Union in the 1940s, Tapinas launched the hashtag campaign #Кремльнашуисториюнеперепишешь (#Kremlin you will not falsify our history), which went viral among Lithuanian internet users in a matter of hours. Both ordinary Lithuanians and well-known public figures took part. The involvement of popular journalists, actors and social activists attracted even more average internet users. Lithuanians flooded the Facebook page of the Ministry of Foreign Affairs of the Russian Federation, where one of the propaganda infographics that set off the campaign had been uploaded, and more than 13,000 comments were posted, exposing the falsehoods it presented. In addition, as a result of the coordinated mass action on Facebook, the rating of the Russian ministry’s page dropped from 4.2 out of 5 stars, to just 1 star. At present, ratings for the Russian Ministry of Foreign Affairs page are blocked.

Increasing media literacy is cited as one of the ways to counter hostile information operations. Baltic journalists, united in The Baltic Center for Media Excellence, are working on projects aimed at improving the qualifications of journalists, promoting the media environment in the Eastern Partnership countries by sharing their experiences and examples of best practices, and reinforcing critical thinking in media consumers and users.[8] Workshops are also organized in libraries, where easy-going public lectures by journalists stimulate and develop media literacy in citizens. 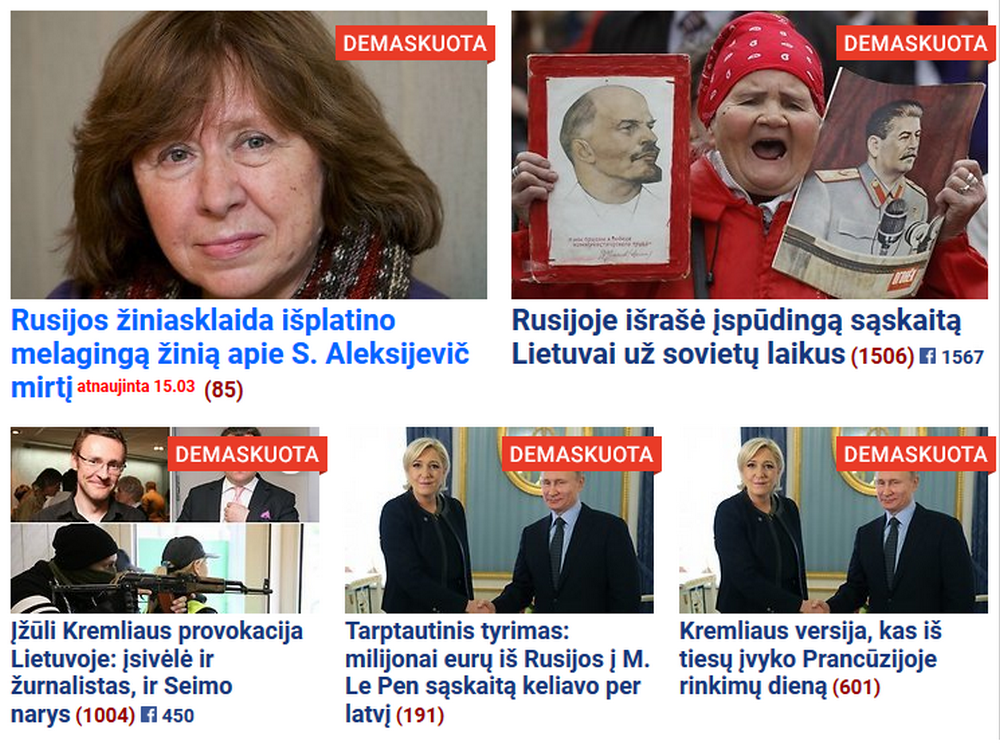 Latvian journalists are also involved in global projects aimed at combating fake news. The Re:Baltica web portal and Toneboard, an IT start-up, received a grant from Google to create a platform to verify the credibility of news.[9]  A considerable need for such tools in Latvia is evidenced by a 2017 study, where 80% of participants reported that they had contact with fake news, but it turned out that those surveyed overestimated their ability to recognize false information.[10]

Some websites in the Baltic countries highlight news about hostile information operations. The editorial board of Delfi in Lithuania, the largest news portal in the region, even launched a special section titled “Unmasking”. Lithuanian journalists publish analyses debunking fake news produced by the Russian media. This initiative is also open to readers of the Delfi portal. There is a form on the main subpage of the site where readers can suggest topics or report fake news to journalists.

Creating an alternative for Russian-speakers in the information space

Since Russian-speaking consumers in the Baltic States are the ones most exposed to the information war, Estonia and Latvia have decided to create an alternative to the better-funded Russian media space. The decision to increase Russian-language informational programming was made at the governmental level.

Creating a Russian-language television channel was an idea developed by the Estonians a decade ago. The impulse for the introduction of such a project by Estonian State Television were the events in Tallinn in 2007, when Russian-speaking residents began riots in the streets of the capital, sparked by the transfer of a Soviet monument from the center of the city to the military cemetery. The riots were accompanied by attacks by pro-Kremlin youths on the Estonian Embassy in Moscow and cyberattacks on the digital infrastructure of Estonia that lasted several months.

The Russian information campaign which was taking place at the time, undoubtedly influenced the radicalization of the mood. This situation clearly revealed the need to create a Russian-language information channel, independent of Russian influence. Voices of support for this project spoke out after the Russian invasion of Georgia in 2008, and the project was launched a few years later. In the autumn of 2015, after the start of the conflict in Ukraine, ETV+, the Estonian channel in Russian, began broadcasting.[11] Nevertheless, the process of gaining viewership and significant market position is complex and time consuming. The popularity of ETV+ among Estonian-speaking Russians has gradually increased, though only marginally.[12] Programs produced in Russia still dominate.

In Latvia, the Russian-speaking minority is more numerous than in Estonia, but no separate channel has been created on public television. However, on the LT7 state channel, there are blocks of programming in Russian. There is also the Russian-language state radio station Program 4 (Latvijas Radio 4).[13] The station is quite popular among listeners.

The specificity of defending the information space in the Baltic States involves the parallel use of state institutions, non-governmental organizations and grassroots social initiatives. At the same time, the sources must reach different groups of society – not all projects addressed to ethnic Lithuanians, Latvians and Estonians will be effective in Russian-speaking communities and vice versa. Moreover, they require constant funding, and their effectiveness can often only be assessed after a longer period of time. This, of course, requires a proper and coherent message directed to one’s own citizens – as well as to the outside, meaning the international community in which these countries operate.

[8] Signe van Zundert, Strengthening pluralistic media and information environment through journalism training, literacy and knowledge-sharing across Estonia, Latvia, Lithuania, the EU Eastern Partnership and beyond, in: Resisting Foreign Propaganda in the New Information Enviroment: The case of the European Union, Russia, and the Countries of the European Union, Foundation for European Progresive Studies, 2016, http://appc.lv/wp-content/uploads/2016/09/Propoganda_petijums.pdf.