What characterizes the most dynamic and often the richest economies in the world? What is the common denominator that links diverse countries such as the U.S., Japan, South Korea and Germany – countries with their own traditions, history, culture and differing social and political systems and geography, playing the role of the economic hegemons of the modern world? 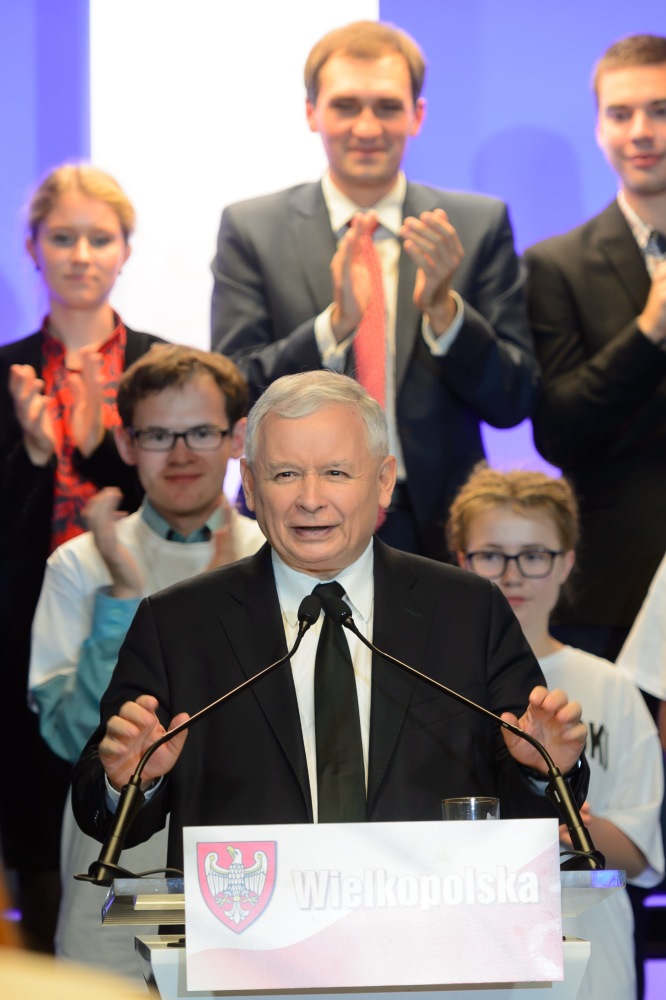 Regardless of their differences, the wealthiest and simultaneously most economically powerful countries share one common trait – economic patriotism, which consists of two elements: trade patriotism and consumer patriotism.

The notion of trade patriotism means actions whose main objective is to support the economy of the country through the public and private sectors. Good public administration has a positive impact on the development of native entrepreneurship in domestic and international markets. Creating conditions for the development of domestic enterprises and their promotion abroad should be the primary aim of the trade strategy of the state. This does not mean a lack of openness to foreign cooperation and capital investment, which can and should positively affect the development of the economy of the country. Besides, in the entire process of creating national wealth, good international agreements and conventions play a positive role, and build business relationships through which each party can and should achieve numerous benefits.

The essence of economic patriotism is not to thoughtlessly create barriers to the development of honest competition or to support the unequal treatment of suppliers, contractors or entrepreneurs in general through subjective criteria. For instance, in countries such as Germany, France, Japan and the U.S., state support is obvious, as is the establishment of cooperation between native entities wherever rational.

Even entrepreneurs paying taxes in their own country is an expression of economic nationalism, which may also lead to the development of a certain image in the market. Of course, entrepreneurs must have confidence that their decisions will be supported by the institutions of the state, which in turn will loyally support their interests. The existence of international competition and capital investments are therefore a good thing, but even the states cited above understand perfectly that their duty and the fundamental objective of their economic policies is to develop a strong class of entrepreneurs and build the wealth of their own societies. These interests will also be served by creating lasting relationships, ties and common interests, including economic ones, for the benefit of all participants of the market, while keeping in mind the primacy of the national interest, which is essential to the civilizational development of societies and states.

No less important for the development of national economies remains the element of consumer patriotism, present in consumer buying habits. Acquiring domestic products, such as fruits, vegetables, domestic beer and cheese, translates into an increase in tax revenues to the state budget and the development of domestic companies, thus raising funds for investment and job creation. This is how consumers perceive the reality in the United States or Germany, where through conscious choices of products and services that support their own economies, they contribute through individual buying decisions to increase the wealth of their own societies.

Economic patriotism, a term which is by no means to be confused with protectionism or interventionism, is now a trend that is clearly making a mark on the world. This is especially so in Western societies, where consumers, conscious of their purchasing decisions, are guided by both economic conditions as well as the values underpinning the acquired service or product, while the administration of the state strives to create favorable conditions for the development of domestic business, which in turn loyally supports the state. It is a far more developed phenomenon in Western countries and actively promoted by politicians, especially noticeable in the U.S., primarily from the time of the 2008 crisis, which was caused by the collapse of the credit market.

The turmoil caused in the markets and global stock exchanges had a sobering impact on the approach of both the United States as well as other societies in the world to economic problems. These events led U.S. companies to start reducing production and employment, to withdraw from foreign investments and, with the support of the state, to return production, services and capital to the nation. Economic patriotism flew on Barack Obama’s election banners when seeking re-election to the presidency in 2012. As leader of the Democratic Party, his platform ( “A New Economic Patriotism: A Plan for Jobs and Middle-Class Security”) encouraged the support of small and mid-sized domestic enterprises, the use of indigenous sources of energy and the improvement of tax collection in order to reduce the budget deficit.

Trade and consumer patriotism is even more strongly emphasized by Republicans in the U.S. For instance, the issue was clearly raised by Republican presidential candidate Donald Trump, during the 2016 election campaign. Indeed, Trump even demanded patriotism from companies, promising less regulation in return and the facilitation of business, including through tax cuts. However, he bluntly and openly announced that he will not hesitate to impose high tariffs on American companies, which seek to lower operating costs, including labor costs, by moving their operations or significant elements thereof (as was the case with Ford, who withdrew from plans to build a new $700 million plant in Mexico, instead opting for investment in Flat Rock, Michigan) outside the U.S., and then wanting to sell their goods in the country. U.S. President Trump was direct and stated that his administration will be guided by two simple rules: buy American and employ Americans. Trump thus wants American patriotism to have a very practical dimension, which is what modern economic patriotism is based on. It is not a matter of declarations, but taking action. It is worth noting that in the U.S., UK, Japan and South Korea, betting on economic patriotism is obvious, while one’s own worldview and political persuasion make little difference.

Today, economic patriotism is one of the most important development trends in mature economies and societies. Patriotism is understood as the cooperation of many entities and institutions that have their own, often divergent interests, yet through cooperation achieve great benefits that reach the rest of the country at the same time. The role of protecting and strengthening the interests of the state grows by shaping trade and consumer policy conducive to cooperation and expansion, creating good law, and supporting local companies. It is precisely economic patriotism that is one of the key elements in the success of the largest economies in the world.

Caring for Poland means taking care of Polish interests and having high standards, as supporting your own producers cannot mean promoting mediocrity, nor closing off cooperation with other economies of the world. Rather, it takes indispensable action to promote a properly defined idea of economic patriotism by identifying what function individual consumers, state authorities and entrepreneurs play in the economic circulatory system and showing why such an approach is meaningful.

Economic patriotism consists of the individual choices of entrepreneurs, consumers, and policy makers, including the shape of legislation which should support the development of the economy, as well as government spending. Economic patriotism also means supporting the investment of foreign capital in such a way that does not harm the interests and security of the functioning of the state, for example in the energy, railway and telecommunications markets.

In Poland awareness is increasing of the need to support the development of an independent economy based on partnership with the countries of the European Union and other economies around the world. At the core of the institutional transformation that initiated the political changes of 1989 was the conviction that the solutions offered by multinational corporations were definitely better – and synonymous with luxury -, which for Poles, weighed down by decades of communism, meant a can of Coca-Cola or jeans. An inferiority complex, alien to Western societies, was formed in relation to most things foreign.

In the meantime, Polish brands, including DRUTEX (the largest producer of PVC joints in Europe), FAKRO (a global market leader in roof windows) , CCC (leader of the Polish retail footwear market and its largest producer), CD Projekt (producer of popular video games, including those based on the series of novels by Andrzej Sapkowski, The Witcher), GINO ROSSI (one of the most respected Polish brands in the market of production and sale of footwear and footwear accessories), INGLOT (one of the world’s largest manufacturers of cosmetics), PESA (manufacturer of both conventional and electric trains and trams) and SOLARIS (one of the leading manufacturers of local and intercity buses, trams and trolleybuses in Europe) did not just cross Polish borders, but are taking the world by storm.

In recent years, throughout East-Central Europe, the importance of regional and local businesses, domestic entrepreneurs, as well as the steadily falling percentage of companies controlled by foreign investors, has gradually been increasing. Companies controlled by the state continue to play a big role, among which the dominant position is held by Polish companies such as PKN Orlen, PGNiG, KGHM, Lotos and PGE; enterprises strategically important to the functioning of the country. It is no accident that these companies draw the most attention; more than 65% of state-owned companies are situated in the energy sector. These companies play an important role in the efforts to build a strong and independent position for the Polish energy sector, as well as strengthening the position of East-Central Europe on the global energy map. Besides, it is the largest enterprises, in addition to the public administration, which are the flagships of the domestic economy.

In the opinion of this author, they should be the ones to create specific standards and best practices in business, and well as in the life of the entire state. This creates patterns and provides incentives and prospects for the development of small businesses, which through cooperation with major national players strengthens their market position, economic stability and potential growth. One can assume that in the long term, the creation of conditions for fair competition will positively affect the relationship between domestic and foreign enterprises.

An example of the powerful position of foreign capital in Poland is the trade dominated by grocery store chains such as the Portugese Biedronka, German Kaufland, Lidl and Real, the Danish Netto, British Tesco and the French Carrefour, Auchan, E.Leclerc and Intermarche. The food industry however stands out positively, in that Poles are increasingly willing to opt for native products, while the country’s dynamic domestic market is developing in organic foods, whose estimated value exceeds 700 million PLN ($175 million).

Today, Poland is a stable and reliable partner. In economic policy, a positive trend can be seen that strengthens the autonomy of the state and builds a strong and independent economic position in the world. The Polish government is turning away from the path chosen after 1989, which rested on a thoughtless approach that assumed that international capital had no nationality, and instead is emphasizing the need to nurture and support native entrepreneurship. The country is interested in foreign investments and good international cooperation, but it is also beginning to understand, based on the models of Western countries, the need to protect national economic interests. Poles, however, still have to develop a form of habitual economic patriotism.