Xi Jinping, General Secretary of the Chinese Communist Party (CCP), participated in the World Economic Forum (WEF) in Davos on January 25. This year it was held virtually. It was his first appearance in Davos in four years, following the one in 2017. The address was Beijing’s manifesto on playing a bigger global role, upholding multilateralism and supporting developing countries. 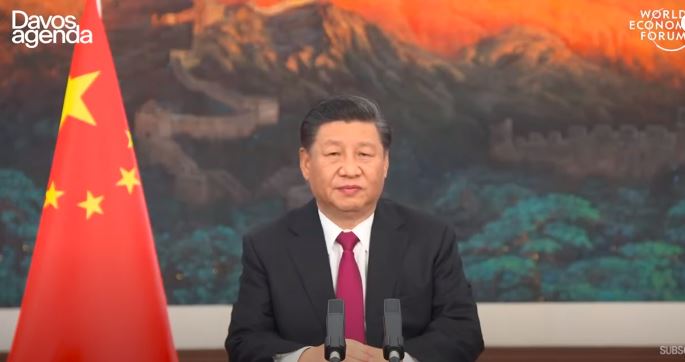 In his speech, Xi Jinping outlined four major challenges facing humanity. First, to step up macroeconomic policy coordination, as a result of the global recession. Second, to abandon “ideological prejudice” and jointly “follow the path of peaceful coexistence.” Third, to close the divide between developed and developing countries. Fourth, to jointly address global challenges such as the COVID-19 pandemic and climate change as well as to promote sustainable development.

The General Secretary of the CCP urged countries to stay committed to openness and multilateralism. As he pointed out “confrontation will lead us to a dead end.” Consequently, Xi suggested that the role of the G20 – “the premier forum for global economic governance,” should be strengthened in coordinating macroeconomic policies. Moreover, he stressed the necessity of maintaining stable and open industrial and supply chains across the world.

Xi underlined the significance of respecting the international law and rules as well as the UN-centered system. He added that global governance should be based on certain norms and consensus, not the orders of one or few nations. President Xi Jinping warned that a “new Cold War” could potentially escalate and that it should be avoided. He did not directly refer to the tensions between the US and China, although one can deduce that their rivalry was the matter. “History and reality have made it clear, time and again, that the misguided approach of antagonism and confrontation, be it in the form of cold war, hot war, trade war or tech war, would eventually hurt all countries’ interests and undermine everyone’s well-being,” Xi added.

Furthermore, Xi highlighted the vital role of the World Health Organization (WHO) in the fight against the pandemic, the need to accelerate the reform of the World Trade Organization (WTO), the international financial and monetary system as well as the necessity to implement the Paris Agreement, along with the promotion of green growth.

Xi used the opportunity to boast about China’s historic achievement in ending extreme poverty, assistance provided to more than 150 countries and 13 international organizations in the fight against the pandemic, in addition to cooperation in the process of making COVID-19 vaccines affordable for developing countries. Additionally, he announced that China will increase funding for science and technology as well as develop systems fostering innovation.

Above all, Xi’s speech underlined openness to the world and glorified the virtues of multilateralism, to which Beijing owes its economic success. The leadership of the CCP gained momentum as a result of the recently concluded negotiations on the Comprehensive Investment Agreement (CAI) with the EU and, earlier, the Regional Comprehensive Economic Partnership (RCEP) with the Asian countries. Further assistance to developing countries has been mentioned every once in a while. Both of these issues are frequently reiterated in the speeches of CCP representatives at global forums, establishing the rhetorical core intended to build the image of Beijing’s global leadership. The US was also heavily criticized, although not straightforwardly. It should be expected that this type of narration will continue in the future.