Chinese Perspective on the Candidate for Pentagon Chief

US President-elect Joe Biden officially named the retired four-star General Lloyd Austin as his pick for the Secretary of Defense in December. According to the Chinese experts, he is a pragmatic candidate who is not focused on Asia and thanks to whom US-China relations can be improved. However, they are aware that confrontation between Washington and Beijing is key nevertheless. 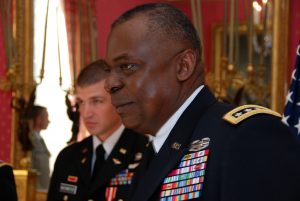 SOURCE: FRENCH EMBASSY IN THE U.S.

In December, Joe Biden nominated Lloyd James Austin as the 28th US Secretary of Defense. He is a 67-year-old retired four-star general of the US Army. Throughout his career, he commanded coalition forces in Iraq, including the Polish forces, among others. He retired in 2016. The US law states that an ex-military can only become the Secretary of Defense after spending seven years on retirement, hence special approval of the US Congress will be needed. If that happens, he will be the first African-American to head the Department of Defense.

Austin is seen as a “hawk” by some of the Chinese media, but this may be a result of the overall anti-American rhetoric. Beijing-based military analyst Wei Dongxu has a different opinion. In his article for the Global Times, he described Austin as a toned-down candidate. According to him, this is a sign that “the US will to some extent ease tensions with China.” He argues that the candidacy for the new Pentagon chief is associated with maintaining the US troops or even increasing their number in the Middle East and a growing importance of the region to the next administration. That is why Biden was expected to choose Austin as he has an extensive experience concerning the Middle East. After the so-called Islamic State (ISIS) captured Mosul in June 2014, he oversaw the development and implementation of the military campaign to combat the ISIS in Iraq and Syria. According to Wei Dongxu, this is also related to the Russian presence in the region, whilst Washington is seeking to expand its Indo-Pacific strategy towards the Middle East across the Indian Ocean and towards the Pacific Ocean through the South China Sea and the Strait of Malacca.

Wei Dongxu argues that “Austin is a traditional and pragmatic military officer, hence his military policies will be rational.” The Biden administration will be committed to continuing the strategy of containment and will strengthen the military rivalry with China because there is a bipartisan consensus for it. Moreover, he underlines the advantages of the changes in the US administration. He believes that “military interactions and exchanges between the two countries may return to a normal state.” He concludes by stating that at this point picking Austin does not necessarily mean that Biden is signaling a clear military policy against China. Similarly, it should not be expected that the pressure on Beijing will change noticeably. Nevertheless, dialogue and meetings “will at least reduce chances of misjudgments and unnecessary risks.”

The Chinese side might be satisfied with the candidacy of Lloyd Austin for the US Secretary of Defense. Michèle Flournoy, who has also been considered for the position and who floated idea to sink China fleet in 72 hours, was eventually not selected for the position. Additionally, some American experts say that Austin’s experience in the Middle East will not help to deal with threats in the Indo-Pacific. He is seen as insufficiently willing to fight China. For Biden, the most pressing challenge is the domestic response to the ongoing COVID-19 pandemic – hence the nomination of General Austin.