The Warsaw Institute Review and Warsaw Institute are proud to announce the upcoming expert event „What’s next for Nord Stream 2?”. The debate will be held on Wednesday, October 14th at 8 PM (CET)! 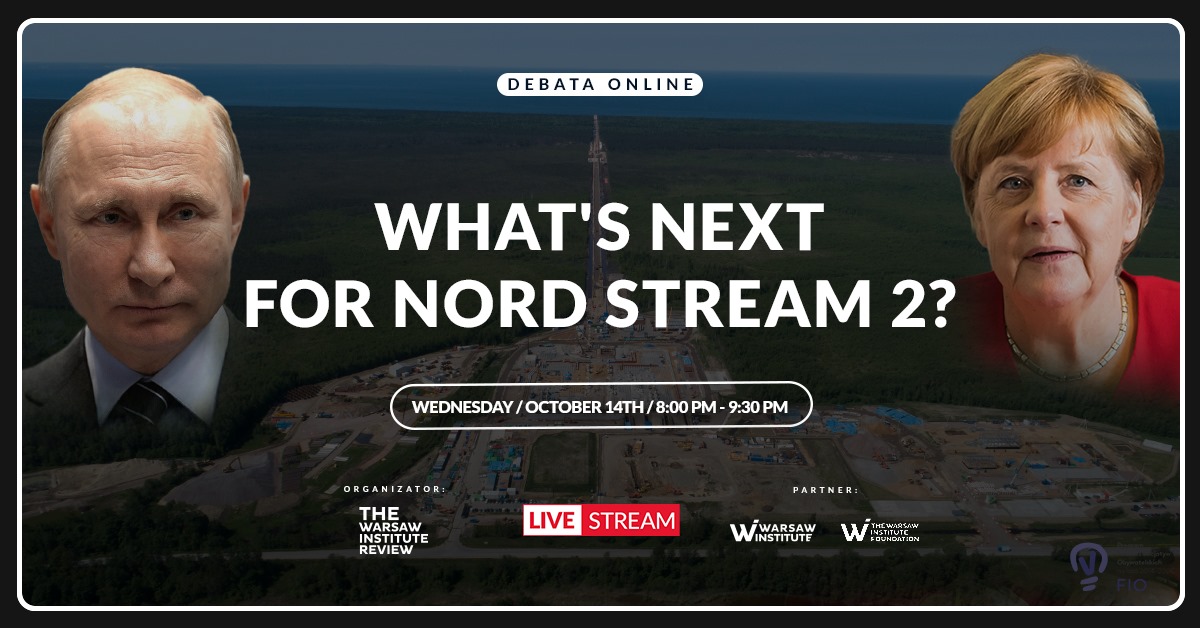 The situation related to the construction of Nord Stream 2 is changing dynamically and its completion is still under question. The project arouses huge emotions not only in Europe, but also in the United States. In addition to US sanctions, the changing factors surrounding the completion of this pipeline also include the issue of the attempt to poison the Russian oppositionist Alexei Navalny and the consent of the Danish Energy Agency to operate the pipeline in Danish waters. Moreover, there is still pending debate in the context of geopolitical and energy security, and also environmental threats. The opposition of Central and Eastern European countries regarding Nord Stream 2 was clear from the very beginning, but now considerable doubts can be seen in Germany itself. This is very controversial, as the project is closely related to the Energiewende – Berlin’s new energy policy.

These and many other issues will be discussed by a panel of exceptional experts:

– Margarita Assenova – member of the Center for European Policy Analysis (CEPA) and Director of Programs for the Balkans, the Caucasus and Central Asia at the Jamestown Foundation. She is, among others, co-author of the books “Eurasian Disunion: Russia’s Vulnerable Flanks”, “Azerbaijan and the New Energy Geopolitics of Southeastern Europe” and author of the report “Europe and Nord Stream Two: Myths, Reality, and the Way Forward”.

– Jakub Wiech – journalist, lawyer, analyst. Deputy editor-in-chief of the Energetyka24. In his work he deals with issues related to energy and information security. He was a laureate of the Student Nobel Prize in the Journalism and Literature category and was nominated for the Grand Press award in the Specialist Journalism category.

– Aleksandra Rybińska – political scientist, publicist and journalist. Warsaw Institute expert on European affairs. Journalist of wPolityce.pl and the weekly magazine Sieci, member of the board of the Maciej Rybiński Foundation, the Foundation for Polish-German Cooperation and the Association of Polish Journalists.

The event will be hosted by Wojciech Jakóbik – Editor-in-chief of BiznesAlert.pl and an expert on energy security and geopolitics.

Link to the live stream from the debate will be available on our social media channels on Wednesday, October 14th at 8:00 PM CET. We cordially invite you to participate in the event!