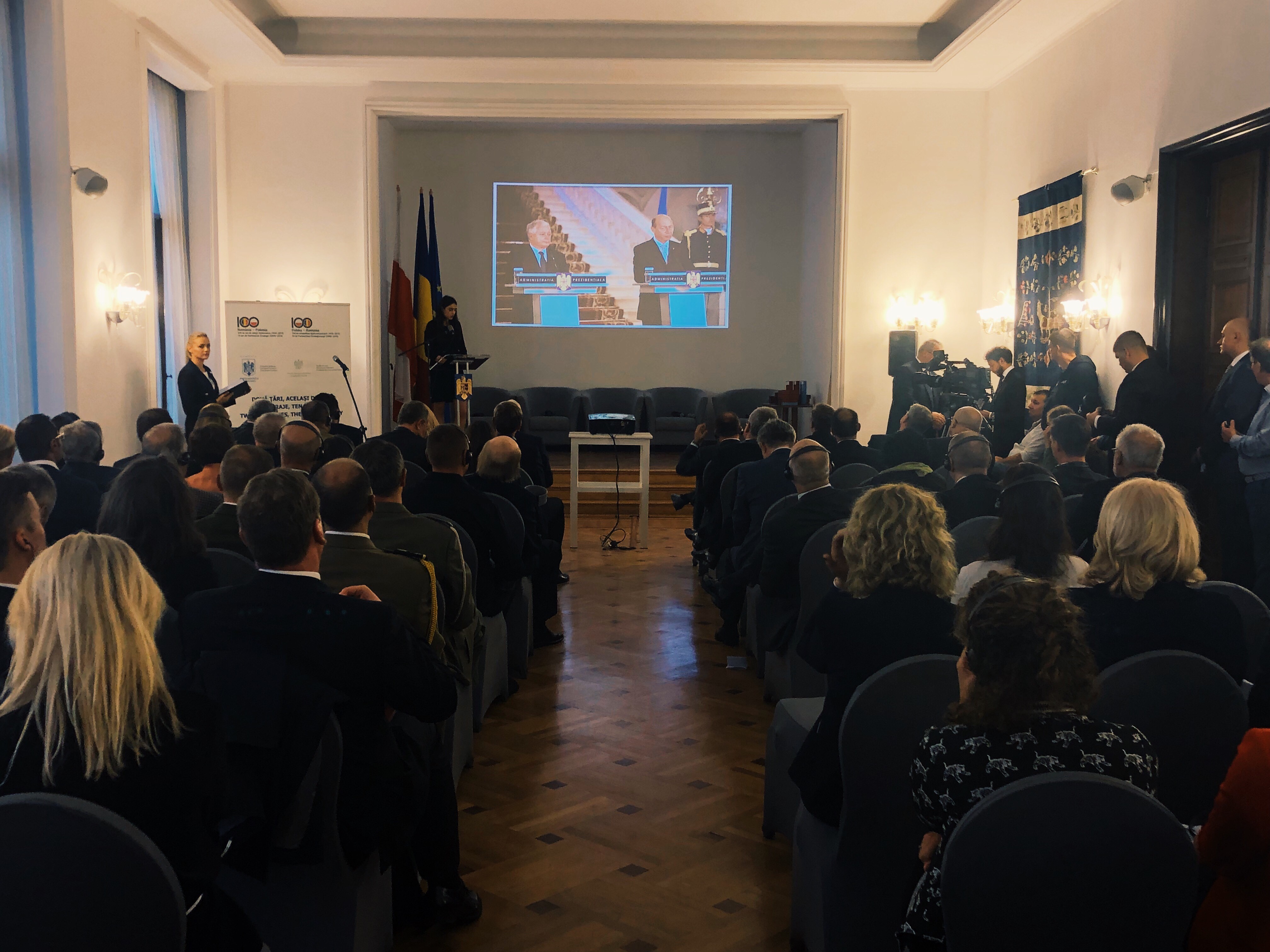 It was dedicated to commemorating 10 years since ‘the Joint Declaration of H.E. Lech Kaczyński, the President of the Republic of Poland, and H.E. Traian Băsescu the President of Romania on the Polish-Romanian Strategic Partnership’ was signed on October 07, 2009. The Warsaw Institute Review (WIR) has the honour to have been a partner in the event.

Though relations between Poland and Romania are incredibly amiable, lively as well as remarkably healthy, they should not be left unattended to. They require diligent nourishing, and in this positivity, efforts are exponentially amplified – differences in approaches can be discussed with the mindset that overcoming them is guaranteed.

The event theme opening was “10 years of strategic partnership – Together, for a more secure and prosperous future”. In this, the event presenter, Ms. Anita Imbre, from the Embassy of Romania in Warsaw, welcomed the gathered participants, who filled the entirety of the room, and more. 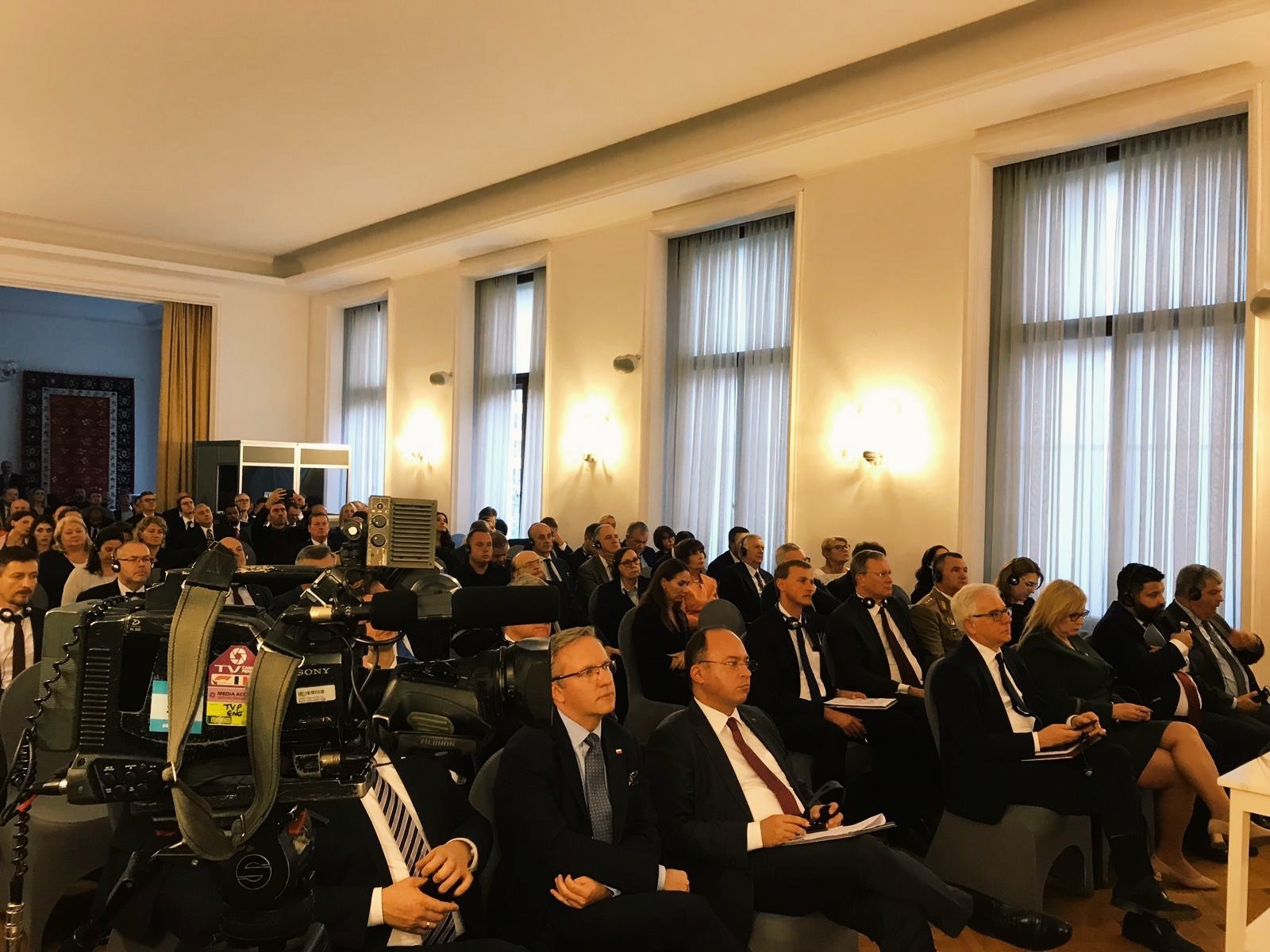 First to take the stage was Ambassador Extraordinary and Plenipotentiary of Romania to the Republic of Poland, Mr. Ovidiu Dranga, in his introductory address. H.E. Mr. Ovidiu Dranga elaborated on the beginnings, the consistency in efforts from both sides since them, and the hopes for the future, all of which this event conveys in its essence and in its details.

Deputy Marshal of the Sejm, Ms. Małgorzata Gosiewska, was next to take the stage, who underscored, amongst several other things, the vibrant societies of both countries, and the mutual admiration, respect and openness towards one another.

One of the ways in which this was manifested, which Poland and Poles everywhere will never forget, was the kindness that Romania displayed towards Poland and Poles during the onset of World War II. Estimates of up to 60,000 Poles had sought refuge in Romania after Nazi Germany and the USSR had split Poland between them. Having a common border at the time, Romania allowed trains departing Poland into Romania, with savvy diplomatic footwork to delay demands to do something about it from Nazi Germany, to give time for Poles to escape. Moreover, within Romanian territory itself, Poles were treated well, in family-like manners. 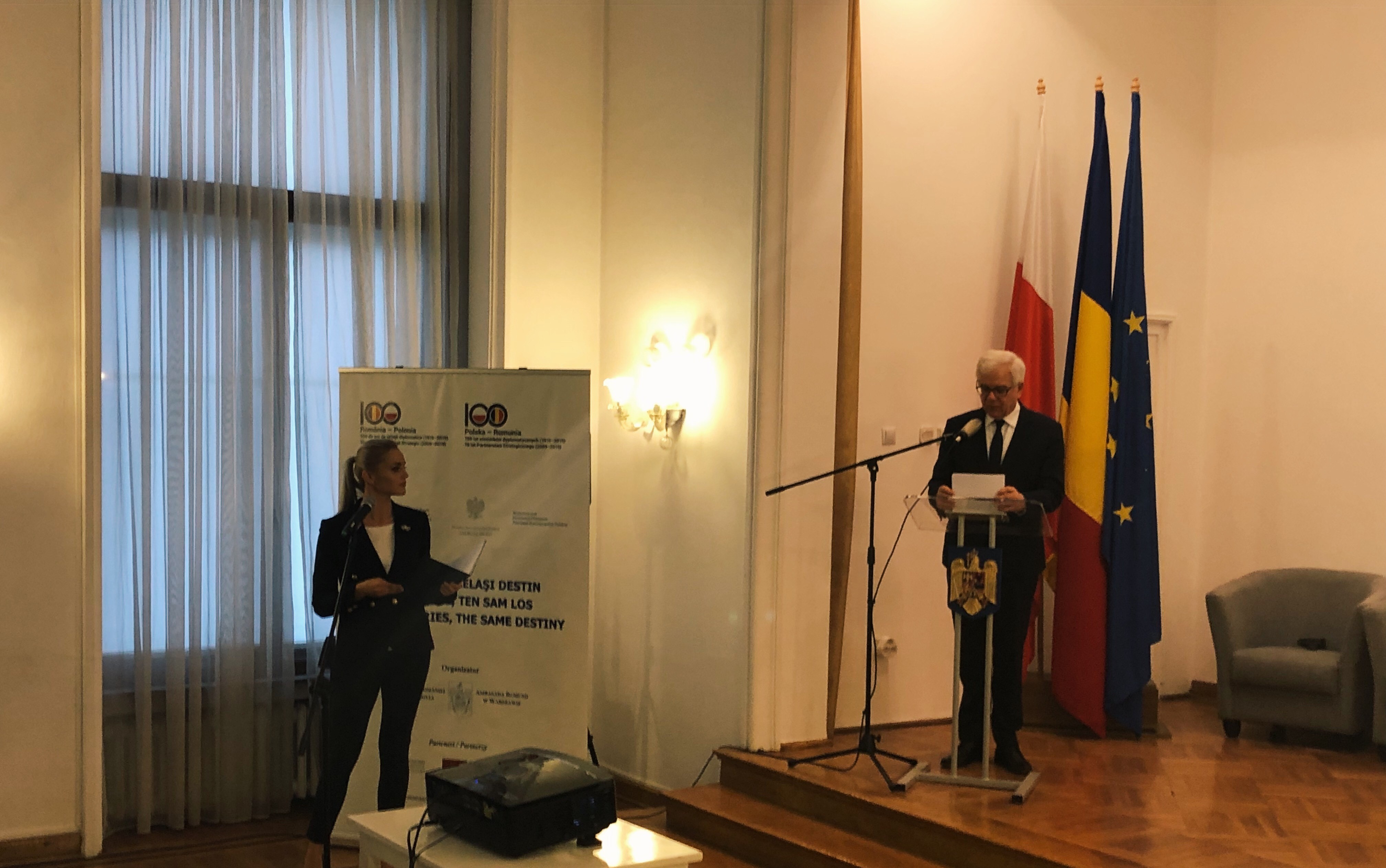 Then, the Minister of Foreign Affairs of the Republic of Poland, Mr. Jacek Czaputowicz, who was seated at the front row, came to the stage to address the audience.

He gave incredible insight into the history of diplomacy in Polish-Romanian bilateral relations, the roles of personal amiability between Poles and Romanians, and as a reflection of such, the strides of individuals and heads of states, governments, and diplomats, to formalise these relations in the wake of geopolitical conundrums and changing status quos.

Romania and Poland established diplomatic relations firstly at the level of provisional mission, on February 9, 1919. Then, on May 31, 1919, this level had elevated to that of a legation.

With this, on the anniversary of the said elevation, on May 31, 1938, the diplomatic missions had received an upgrade in rank, and formally became Embassies.

Though, in light of the troublesome situation upon the onset of World War II, diplomatic relations had been suspended in 1940 but were promptly re-established in 1945.

Mr. Jacek Czaputowicz also elaborated further to the areas of contemporary cooperation, and the abundance of reasons for optimism.

Address by the Deputy Minister of Foreign Affairs of Romania, Mr. Dan Neculăescu included references to the continuity of friendship between Romania and Poland, which includes support for each other’s leading roles in multilateral formats, namely the Bucharest Nine, the Three Seas’ Initiative. It is good to have a friend among friends, particularly in the UN, NATO, EU, and other multilateral platforms.

This was followed by a screening of a short documentary on the common Romanian-Polish history, produced by the Media Department of the Ministry of National Defence of Romania. The documentary was an intriguing journey through time and the complex amalgamation of historical developments and turning points which forged time and time again the closeness of the two countries; and it was a documentary made remarkably well.

It featured interviews with historians, experts, military personnel, and most aptly, with witnesses of history, who were unable to personally physically join the event at the Embassy in Warsaw.

The aforementioned documentary was followed up on with a fitting continuation by means of a presentation, worth noting, from WIR. The presentation was delivered to the audience by WIR Editorial Secretary Berenika Grabowska and put together by WIR Advisor Alexander Wielgos.

In it, the attention of the audience was brought to the showcasing of the legacy of President of the Republic of Poland Lech Kaczyński has played and, vitally, continues to play with regard to Polish-Romanian relations.

The presentation followed the aspirations of Present Lech Kaczyński’s foreign policy for Poland, showing footage and videos from the visit to Bucharest in 2009, and the signing of the Joint Declaration for the Strategic Partnership between Poland and Romania. 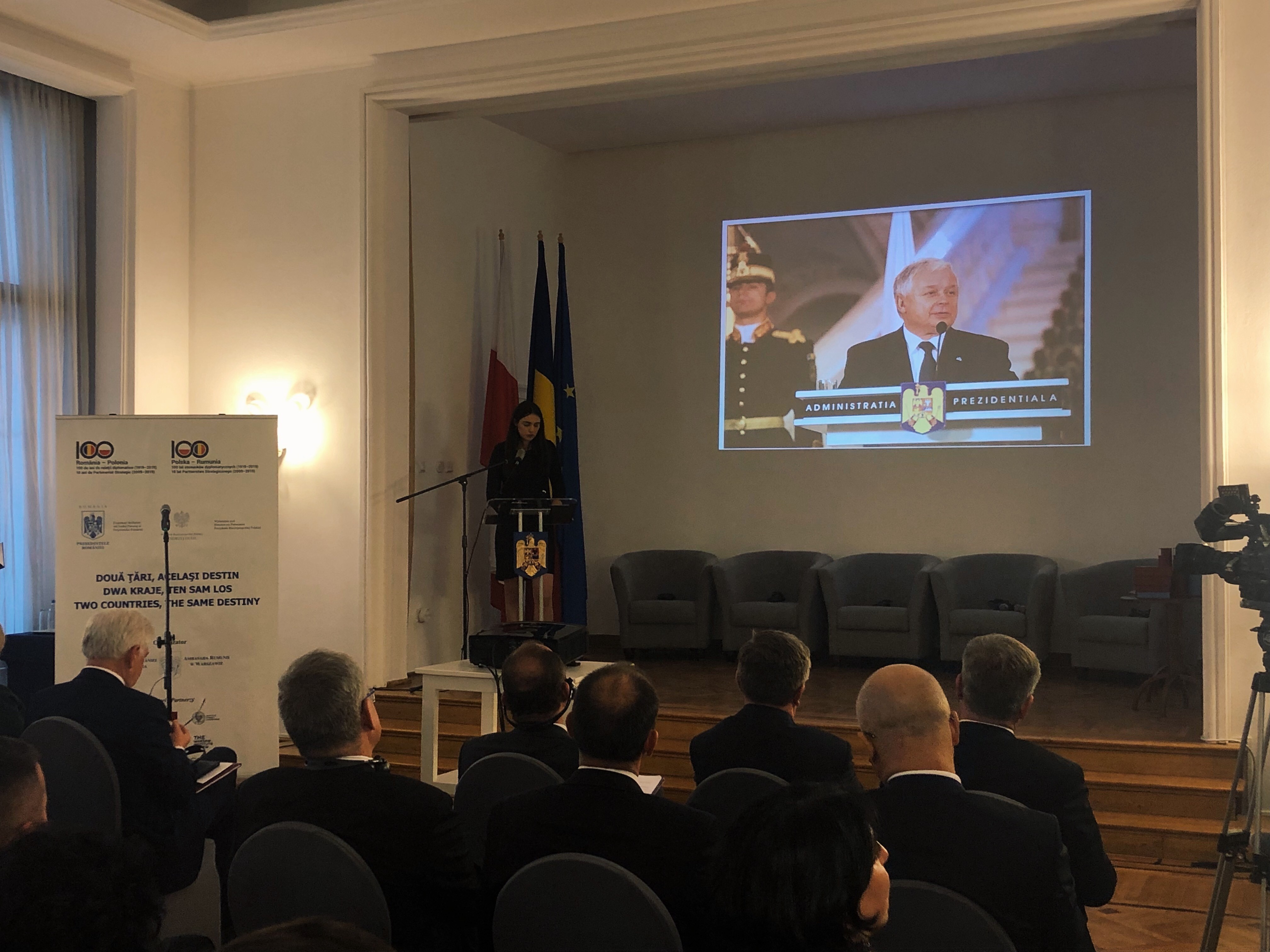 This also included the very signing, and the press conference which took place after, as well as a scan of the original document, provided by the Chancellery of the President of the Republic of Poland: 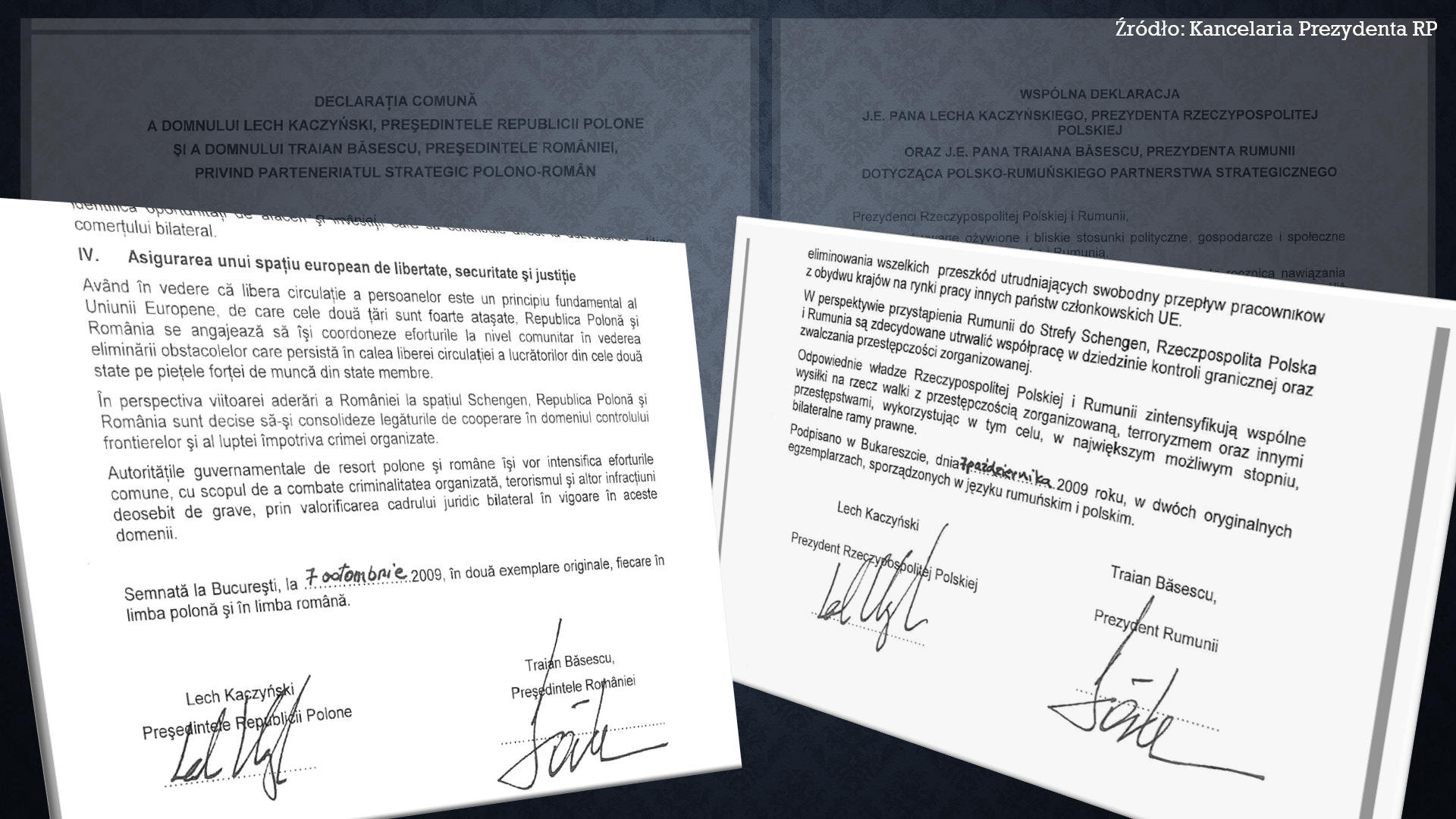 The core features of the declaration, the areas in which Romania and Poland agreed to cooperate on include their roles in strengthening NATO, and positively impacting the engagement with it as well as the political, military and economic capabilities and propensities of the EU. The features reflect the ambitions of President Lech Kaczyński, for whom, the Central Eastern European region was of paramount pertinence.

It then concluded with quotes from the incumbent President of the Republic of Poland H.E. Andrzej Duda, which were roughly translated as:
„A hundred years ago, the relations between our countries – alongside important political, military, and economic issues – had also a very personal dimension of mutual empathy connecting Józef Piłsudski and King Karol II. Today, on the eve of a meeting of Presidents of the Bucharest Nine, and thus Central European states of NATO, we remember the timelessness and universality of the strategic aspirations of our partnership.”

At this event were present also President of the Warsaw Institute think tank Mr. Krzysztof Kamiński as well as WIR’s Communications Specialist Mr. Łukasz Biernacki, who photographed its moments. WIR’s participation as a partner and its contribution was in part by the very first Strategy Duologue meeting, which was with the Embassy of Romania, which took place earlier, in June this year.

After the presentation, followed the ceremony of awarding state decorations by the Presidents of Romania and Poland to several Polish and Romanian personalities and individuals, for their contribution to the development of the bilateral partnership; the decorations were handed over by the Presidential Advisors Mr. Krzysztof Szczerski and Mr. Bogdan Aurescu.

And those from the Romanian side:
– Mr. Bogdan Aurescu, Presidential Advisor on Foreign Policy, who earlier presented the message from President Klaus Iohannis
– Mr. Ion Oprişor, Presidential Advisor on National Security
– Mr. Dan Neculăescu, Deputy Minister of Foreign Affairs of Romania, who earlier spoke in an address to the audience
– Lt. Gen. Daniel Petrescu, Deputy Chief of Defence Staff
– Mrs. Antoaneta Barta, Director General, Romanian Ministry of Foreign Affairs
– Mr. Ovidiu Dranga, Ambassador Extraordinary and Plenipotentiary of Romania to the Republic of Poland, who also delivered the introductory address of the event

Awardees gathered for a family photo: 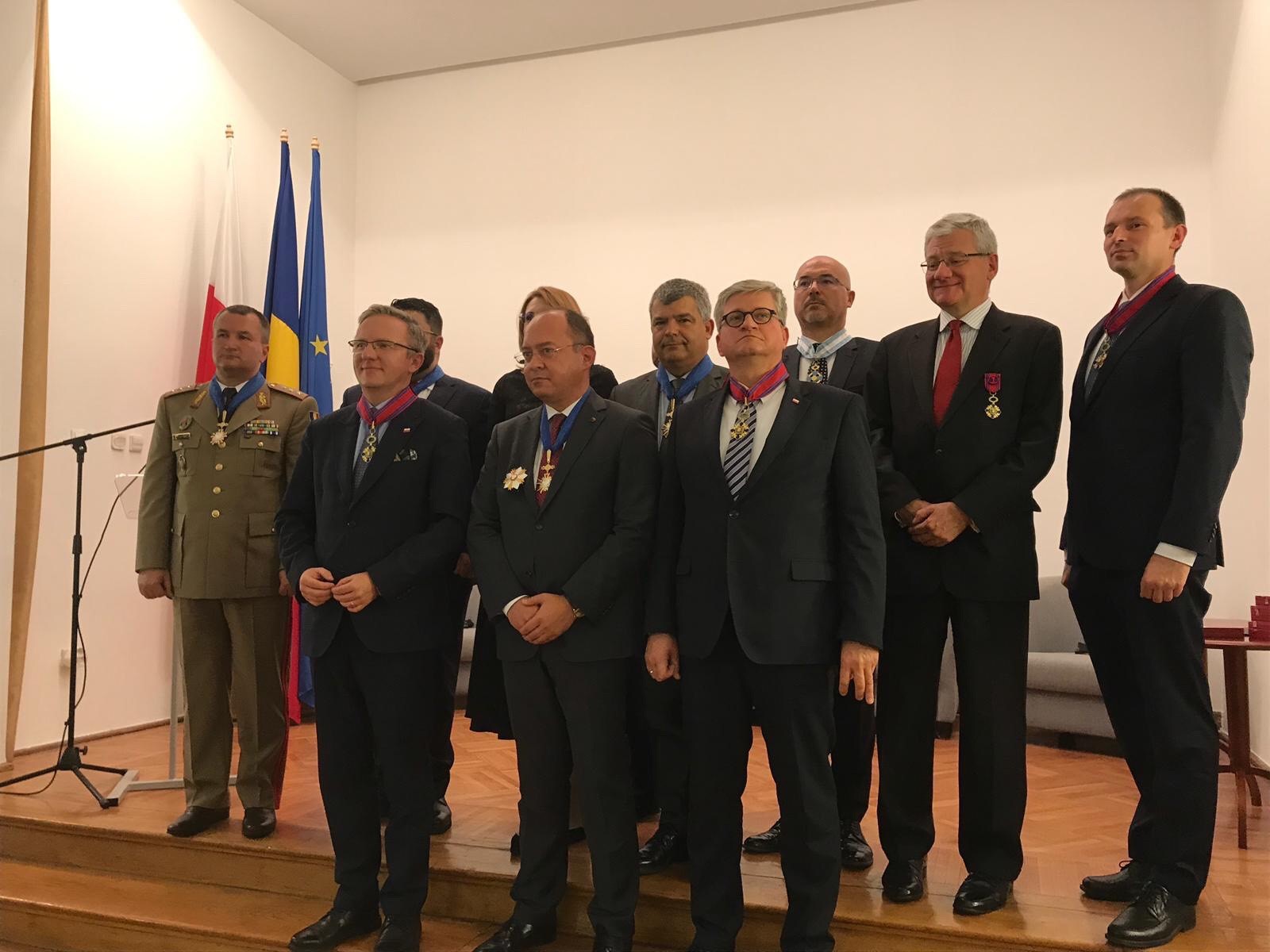 Indeed, they have gone down in history of Polish-Romanian relations, and have put into motion efforts which pave the way for a better, more prosperous future for both countries by going about it together.

The next part of the event was a short presentation by Prof. Andrzej Dubicki, from the University of Łódź, which was titled “The Daily Life of Polish Refugees in Romania in 1939-1945”. Prof. Dubicki also authored a Warsaw Institute publication titled “Lucjan Skupiewski. Social and Political Biography“. 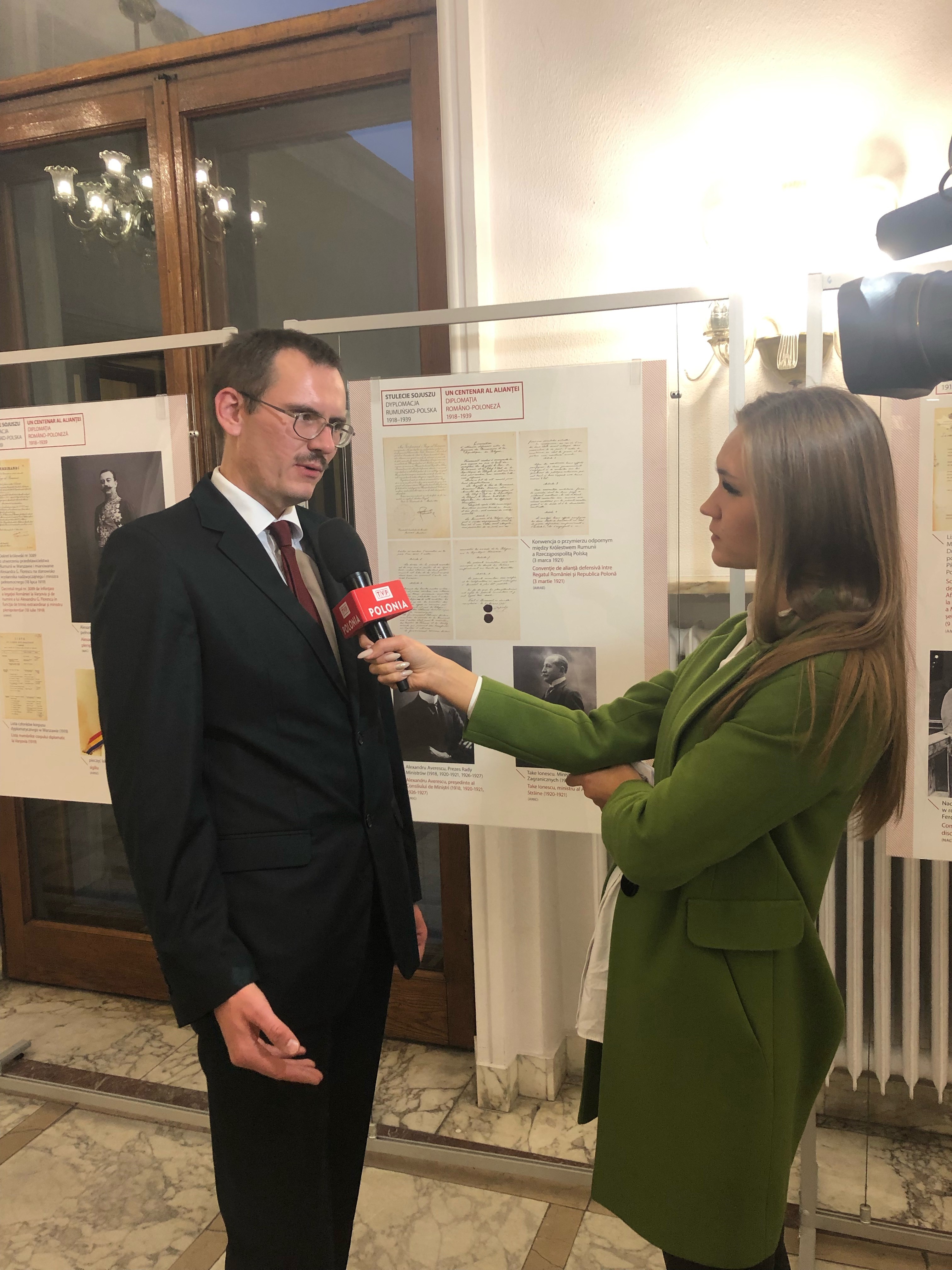 Prof. Dubicki outlined, and encouraged the audience to pay particular attention to the events of September 17, 1939, which were impactful in more ways than commonly known, and the technicalities behind the mass moving of people, sheltering them, life during this time, and the wider historical aspects stemming from this.

This was most fittingly followed by 3 witnesses of the Polish Refuge to Romania during World War II, who shared their stories, memories and emotions with the audience. Their presentations were accompanied by pictures from their younger days.

After a short coffee break, the event resumed with the session titled “A Common History – The Hearts’ Alliance, One People, Two Flags (Józef Piłsudski)”. The session’s moderator was Mr. Bogusław Chrabota, Editor-in-Chief of Rzeczpospolita.

Mr. Alexandru Groza put forward interesting notions on how Poles affected Romanians throughout history, stretching back even to medieval times. Additionally, he discussed how this extended in elements both political and cultural, including how Romanians closely observed the events of 1989 and, as there are deep historical and personal ties between the two countries, could not help but feel empathy and motivation.

Concluding the session was an invitation to the cocktail buffet, during which the events’ guests, panellists, organisers and all participants could contemplate the past, present and future of Polish-Romanian relations.

Here, participants could meet other guests, for whom the two countries are close in a surprisingly wide variety of ways, from artists, entrepreneurs, diplomats, etc.; they could, however, also meet the staff of the Embassy of Romania in Warsaw, who worked tirelessly to see the event come together, which include Lt. Col. Liviu Piticari, Ms. Katalin Oanta, Mr. Catalin Radoi, Mr. Dan Oanta, Mr. Teodor Lupaşcu, and several others.

Furthermore still, to give perspective on the comprehensiveness of such events, was the arduous work of translators and live interpreters, which made each and every word of the event understandable instantly in English, Polish, and Romanian via a headset.

By the way, the wine was superb, with credit to ‘Rumuńskie Smaki’, the first ever Romanian restaurant and gastronomic service in Poland.

Placed on both around the entry point in the Embassy building as well as adjacent to the hall in which the event took place, were placed two exhibitions, which included:
– “One Hundred Years of Romanian-Polish Alliance 1918 – 1939”, as courtesy of the Romanian Cultural Institute in Warsaw
– An exhibition on the Polish Refuge to Romania, as courtesy of the Polish Institute of National Remembrance 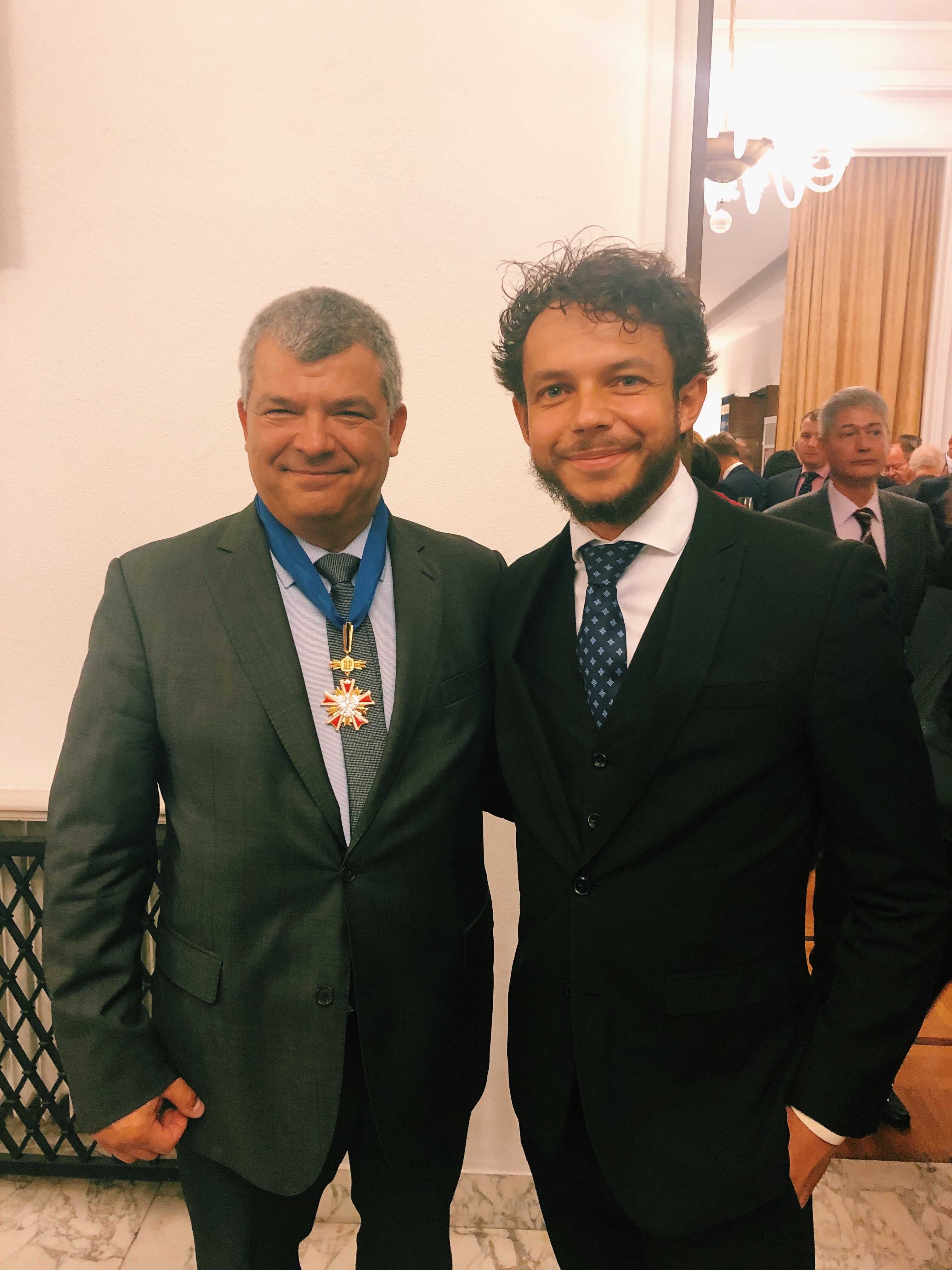 In all, the event is a culmination of several wonderful achievements, and overcoming differences with a suave eagerness to work together. This is not simply a short exhibition of a success chapter in bilateral relations, or even for the good and stability of the Central Eastern European region; it extends further. As another example and precedent of the good that mutual assistance between two friendly states and peoples can mutually create, it serves as a showcase of cooperation that it is possible, but also a trajectory mechanism for then furthering that very cooperation. It may even give hope and lessons learnt to those aspiring to bring countries and people closer together elsewhere around the world, or in the Central Eastern European region as well.