Relations between the PRC and the Russian Federation in the 2010-2020 decade have clearly strengthened in political, economic and military terms, prompting some observers to conclude that they have achieved the status of an informal military alliance. However, how has the strategic partnership of both countries been affected by the COVID-19 pandemic? Despite the initial tensions caused by the Russian side’s rapid connections cut off with China, the pandemic provided an opportunity to further deepen political collaboration and increase the scale of economic cooperation. 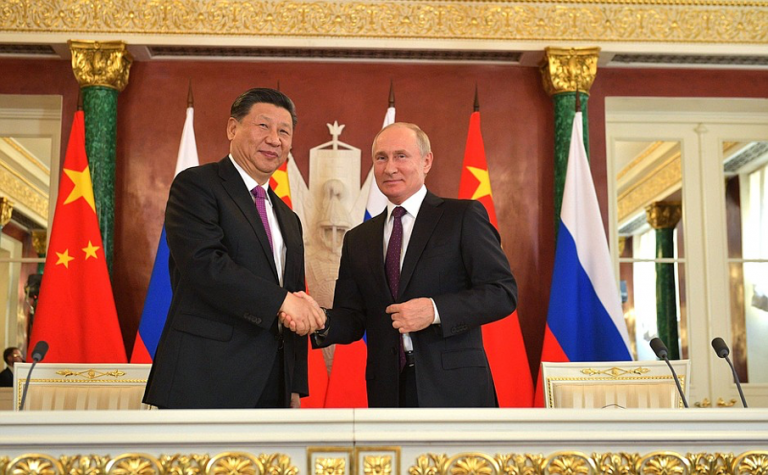 In April and May, Russia’s GDP decreased by -12.1% – 10.9% y/y respectively, whilst for the first five months the Russian budget recorded a deficit of RUB 407 billion. In the first quarter, China’s share in the Russian Federation’s foreign trade reached its highest level ever (17.3%). The increase resulted from record purchases of Russian oil (21.07 million tons), which was a consequence of exceptionally low oil prices on world markets. In the information space, the establishments of both countries engaged in coordinated actions to undermine the image of the European Union, NATO and the USA. The changes in the constitution of the Russian Federation and the introduction of the Hong Kong national security law met with foreseeable criticism from the Western world and a mutual understanding expressed by Presidents Xi Jinping and Vladimir Putin.

The binder of Russian-Chinese relations is the desire to limit the domination of the United States and the West, resulting in a multipolar world in which Russia and China will play a proportionately greater role. The weakness of the main rivals is extremely important, taking the political status quo in both countries as its starting point. The motivations of the Chinese and Russian elites are such that they will seek double decoupling in transatlantic relations. The aim would be to maximize Europe’s independence from the United States as well as to exploit and deepen the divisions between European countries. An internally divided West and Europe will constitute less demanding competitors, allowing both China and Russia to pursue their own interests without a threat of external intervention. For this reason, both countries are coordinating their activities, for example with regard to disinformation activities in Europe. On April 27, NATO Secretary General – Jens Stoltenberg, warned against actions aimed at the unity of the alliance, while on June 10, 2020, the European Commission issued a similar warning with regard to China.

Consistently, economic and energy cooperation has remained a sphere which favors the deepening of bilateral relations. China is also Russia’s most significant trading partner and the value of trade in 2018 exceeded USD 108 billion, which is more than the cumulative value of trade with Germany (USD 56.69 billion), Japan (USD 21.26 billion) and Italy (USD 26.98 billion). Russia plays an incomparably smaller role in China’s economic policy as it is only tenth on the list of the most important partners. The total value of PRC’s foreign trade is over USD 4.5 trillion – Russia accounts for less than 3.5% of this amount. However, it plays a crucial role being an important source of cheap energy resources, thus reducing dependence on imports from Africa and the Middle East via the Indian Ocean routes. At a time of intensifying maritime rivalry between the USA, India, Japan and some Southeast Asian countries, ensuring supplies of hydrocarbons by land is a vital strategic asset.

Since the 1990s, Russia has also been China’s most important source of high-tech military equipment, such as: Su-35 and Su-30 MKK aircraft, S-300 and S-400 missile systems or Al.-31FM2 jet engines for fifth-generation J-20 multi-purpose planes. Kilo-class submarines and SS-N-27/SS-N-22 anti-ship maneuvering missiles were also purchased from Russia. Furthermore, Vladimir Putin announced in 2019 that Russia would help China to develop a ballistic missile detection system. Purchases of equipment has so far been an important part of bilateral relations, but the growing scientific and technical potential of the PRC in addition to the booming arms industry, have a chance to deprive Russia of one of the few real assets it has left.

Although relations between the two countries have become extremely intense since 2014, this does not mean that they lack any tensions. Central Asia is one of the potential moot points that could jeopardize the long-term development of relations. For the Russian elites, the post-Soviet area, also referred to as the “near abroad”, is a sphere of vital interests of the Russian Federation, which is of decisive importance for its security and a great empire identity. For this reason, the emergence of competing entities is treated by Moscow from the perspective of the “zero-sum game”, according to which the benefits of one state are associated with similar losses for the other. So far, the Beijing authorities have tried not to antagonize the relationship with a strategic partner by limiting their activities almost exclusively to the economic dimension. With regard to Central Asia, a specific distribution of labor has occurred. On the one hand, Russia has a dominant position in terms of military cooperation, acting mainly through the Collective Security Treaty Organization (CSTO). On the other hand, China is trying to limit its activities to energy, investment and credit cooperation as well as to counter radicalization and terrorism within the Shanghai Cooperation Organization (SCO). Additionally, there is the Belt and Road Initiative (BRI) along with the Eurasian Economic Union (EAEU), which aim to strengthen the economic influences of each country.

The growing material and demographic predominance of China, resulting in a growing sense of threat among elites and anti-Chinese sentiments in society, might become one of the key problems. Clashes between the Chinese People’s Liberation Army and the Indian armed forces have proved that Russia is far from taking a clear stand on Beijing’s side. President Putin personally engaged in mediation between the two parties and agreed to speed up the delivery of 33 combat aircraft (Su-30 MKI and MiG-29) to India. The authorities in New Delhi are one of the main Cold War partners of Russia and one of the most important markets for the Russian arms industry. The growing imbalance between China’s and Russia’s power makes the Kremlin authorities look for ways to potentially balance an increasingly stronger partner. A strategic partnership with India, which is one of the PRC’s regional rivals, is therefore a natural course of action.

Recent attempts to adapt the North Atlantic Alliance to the challenges of PRC’s growing power may create a new field for cooperation between Beijing and Moscow. Until recently, NATO has remained on the margins of Chinese interests, but the awareness that the Alliance may become one of the tools of global rivalry between the US and China has made this issue a matter of growing interest among experts. Should the differences between the member states be overcome and a more confrontational direction towards the PRC be taken, the cooperation between Beijing and Moscow would most likely gain an additional dimension.

Over the last few years, there has been a discussion in the US on a possible “reset” in relations with Russia, which would allow to focus on the policy towards China. The “reversal” of the alliances is rather an unrealistic scenario given the diverging interests and perceptions of Western countries and Russia. Much more likely is the option of limited sectoral relaxation, which serves the American policy of holding China back and introduces an additional element of balance into Beijing-Moscow relations.