Russia’s constitutional amendments came into force on July 4. Putin signed the decree two days after the Central Election Commission announced the final results of a national vote. Its outcome might have gone in line with what Kremlin senior officials could expect. With the decree, a sweeping package of constitutional amendments will bring into force that among other things open a path for Vladimir Putin to stay in power till 2036. Yet the whole mission to modify the Russian constitution and the poll itself both show that there is something that grapples Russian officials. 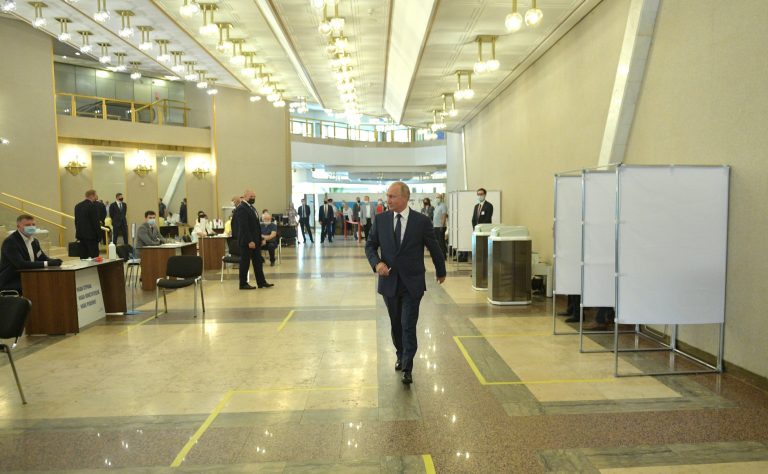 “We made this important decision together, as a country,” the Russian president on July 3 said during a conference with lawmakers who worked on drafting the amendments.  Yet contrary to what the Russian leader is saying, the constitutional overhaul was imposed forcefully, with Kremlin officials breaching the law to pass the reform package. But for a wide range of fraudulent tricks like saying “yes” or “no” to the whole package, many of whom were both social and populism-tainted, Putin would not have gotten public affirmation that was so vital to his legitimacy to make him rule Russian until 2036. Kremlin critics denounced the results of the plebiscite — with 78 percent “yes” votes and a nearly 68 percent turnout – as falsified and undermining the legitimacy of the amendments. As many as one-third of all ballots could have been rigged, while independent polls showed that if Russians were to vote each update separately, roughly 25 percent of them would approve the amendment poised to reset Putin’s term-limit clock to zero. To avoid unpleasant surprises, the Kremlin saw the amendments cover dozens of existing articles, and add several new ones, with the whole process stretched over seven days. Also, Russian voters were allowed to cast their ballot outside polling stations or even vote online. Russian authorities had an ample possibility to have their outcomes rigged, with no proper monitoring or independent scrutiny. In consequence, by July 1 morning, thus at the start of the final day of voting, 55 percent of Russia’s registered voters had already cast their ballot. But at the end of Russia’s seven-day national plebiscite, another 15 percent of Russians turned out for the ballot in what was the most challenging to have the outcomes falsified. The whole vote showed that Putin is no longer popular as the Russian president, nor does he have legitimacy for being an absolute leader, while Russian society is unable to decry anything now. Thus the Russian regime will keep on mastering new tools for coercion. The paradox is that the country’s officials would not do that if Russian citizens showed mass support for Vladimir Putin. But for that, Russians might have taken a far more revolutionary stance. First, there would be no point in tightening repression, and secondly, that would be far too risky.

Read more about Russia’s constitutional overhaul in our special report