The “Abraham Accord” and the symbolic end of an era

On Thursday, August 13, 2020, the world heard about an agreement between Israel and the United Arab Emirates concerning the normalization of mutual relations. The event, mediated by the United States led by Donald Trump, has been dubbed the “Abraham Accord,” and while this is not the first time Israel has entered into official diplomatic ties with an Arab country, it is still a breakthrough in many ways. In the symbolic dimension, we can speak of the actual end of a certain era and the “Israel versus Arab countries” paradigm, which shaped the reality of international relations in the Middle East for almost 70 years. 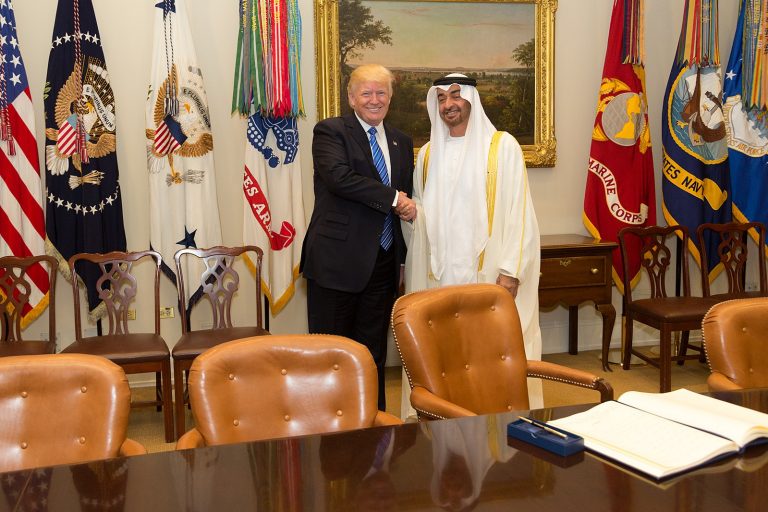 In the public consciousness, the Middle East is somewhat rightly associated as a region, euphemistically speaking, not free from conflicts, of which one of the most significant and lasting for years is the one concerning Israel and Palestine. Without going into details, it’s enough to remind that in 1948, when the State of Israel was proclaimed, the surrounding Arab states did not recognize this fact, and in most cases this situation continues to this day. The UAE, as already mentioned, are not the first Arab country to normalize relations with this country. The first was, of course, Egypt and the famous Camp David agreement of 1978, pioneering and ground-breaking also by the fact that from the very beginning it was Egypt that was the leading country of the anti-Israel coalition, mainly because of its immediate neighbourhood, military strength and importance in the region. The signatory of this agreement, President Anwar al-Sadat, paid a price for his innovativeness first with isolation by other countries in the region (including Egypt’s exclusion from the Arab League for over 10 years), and then with his life, as a result of the 1981 attack, mainly motivated by the normalization of relations with Israel. Another country that decided to take such a step was Jordan in 1994, but in the case of the Hashemite Kingdom, the geopolitical situation was completely different (the Oslo Accords) and there were no such consequences as sanctions or severe extremist attacks. This time the case is similar and the decision of the Emirates has not met the significant indignation of other Arab countries. However, it is difficult to judge whether this will increase the terrorist threat from radicals.

The signing of the agreement is certainly related to the growing ambitions of the Emirates and the willingness to play an increasing role in the region. It is also part of a series of “ground-breaking” news that have taken place recently, such as the sending of the first Arab space probe to Mars (Al-Amal, or Hope, launched on July 19), or the recent launch of the first commercial Arab power plant Barakah. All these events can be seen in the broader context of economic and social changes that are taking place in the Gulf countries, which also affect the directions of international politics.

The nature of this change is significant, although the agreement itself is rather its symbolic crowning and confirmation of the actual state of affairs, rather than setting a completely new policy. For a long time it has been observed that the Sunni Arab states, led by Saudi Arabia and the Emirates, are starting to pay more attention to suppressing the regional aspirations of Shi’ite Iran or “neo-Ottoman” Turkey than to fighting the “Zionist occupant of Palestine”. The Palestinian topic did although appear in this story, it was immediately announced that the price for the normalization of relations will be Israel abandoning its plans to annex the territories occupied since 1967. This is undoubtedly a very positive issue, the implementation of these plans would not bring any good, but it does not change the fact that on the Israeli side it does not really mean any concessions, but the return and consolidation of the previous status quo on the Palestinian issue, in which the situation of the Palestinians themselves is, to put it mildly, not the best. The abandonment of the annexation plans was therefore only a pretext, and the reality is that the concept of the “two-state solution” is basically dead, and the Palestinians were once again played out in the global game and left to themselves. Nevertheless, the Emirati-Israeli agreement also means that, at least in future negotiations on the Palestinian issue, the UAE will also be a party, taking the place of Egypt that was marginalized by internal problems. The question, however, is whether this is mainly of a prestigious dimension, since Israel has received a clear signal that the Palestinian cause is no longer such an obstacle in establishing diplomatic relations in the region and coming out of isolation.

The agreement marks therefore a symbolic end to the paradigm of international relations in the Middle East based on the consistent opposition of Arab states to Israel. For several years now, the focus has been shifting from the “Arab-Jewish” or even “Muslim-Jewish” conflict to the Sunni-Shiite conflict, as old as Islam itself, which although partially “nationalized” by the fact that the main face of Shiism is non-Arab Iran, it is still largely fought in the form of proxy civil wars in Arab Syria and Yemen, where sectarian issues shape the warring parties. In recent years, however, the religiously framed rivalry between regional Middle Eastern powers has begun to contradict the increasingly frequent contests by Arab countries of the growing power and importance of Sunni Turkey and mutual conflicts of interest. So although the leaders of the Emirates, Saudi Arabia and Egypt, who make up the core of the camp in question, often refer to “Arabness” opposed to “Turkishness” or “Persianity”, the essence of the rivalry is, of course, primarily the conflict of interests. Israel, on the other hand, for obvious reasons is interested in weakening Iran and (for somewhat less obvious) Turkey, the most active advocate of the Palestinian cause in recent times, which in combination with a common ally of both Tel Aviv and the aforementioned Arab countries, i.e. the USA, had to sooner or later lead to the emergence of a common front, culminating in the recent normalization of relations. It is true however that there were also voices published by the Warsaw Institute that the UAE can actually cooperate with Iran, for example on the Libyan issue, nevertheless, if we try to indicate the most frequent topic in the commentary on the “Abraham Accord”, it will be a common Israeli-Emirate threat in the form of Tehran.

The American issue, or rather the succession in the White House, is also one of the factors that could have influenced the conclusion of the agreement. It goes without saying that the Trump administration is among the most sympathetic to Israel in history. However, this trend could be completely reversed in the event of the defeat of the incumbent president in the November elections and the victory of Joe Biden, who would probably pursue a more Obama-style Middle East policy. The United Arab Emirates have also worse PR among Democrats, for example due to the war in Yemen. The normalization of relations is therefore intended to improve the image of both countries as well and to protect each other in the event of a potential change in Washington’s course.

The Emirati-Israeli agreement, although announced somewhat unexpectedly, is in fact not a big surprise given the current geopolitical situation in the region. This fact has a more symbolic dimension and formalizes the processes that have been taking place in the Middle East for some time. It is very likely that we will soon hear about similar steps taken by other Arab countries, such as Oman or Bahrain. Certainly, it will not be Saudi Arabia, which, although it has even more convergent interests with Israel than the UAE, will not take such actions for “religious-image” reasons. Nevertheless, it will probably quietly support them in the case of other countries, and in the event of a need to contact the Israeli side, it now has a convenient intermediary. The agreement will to some extent contribute to the relative stabilization of the situation in the region at least in a few points, but in a broader context the case of Palestine remains the key issue and as long as it is not settled in accordance with the rights of the Palestinians themselves, it will not be a full peace in the Middle East.