Iran’s Economy in the Face of Sanctions and Pandemic, part 2

Since the US implemented the policy of “maximum pressure” on Iran, media reports predicting the imminent bankruptcy of the country or catastrophic, perfunctory analyzes of the Iranian economy, usually adorned with statements by “random” Iranians complaining about the crisis, have become more frequent. The negative impact of the sanctions on the lives of Iranians and state finances is undeniable, but their effectiveness in forcing Tehran to make concessions is greatly exaggerated. The sanctions have put Iran into recessions, but despite the alarmist and highly biased media materials, the economic situation in Iran is not dramatic and does not threaten the collapse of the regime. 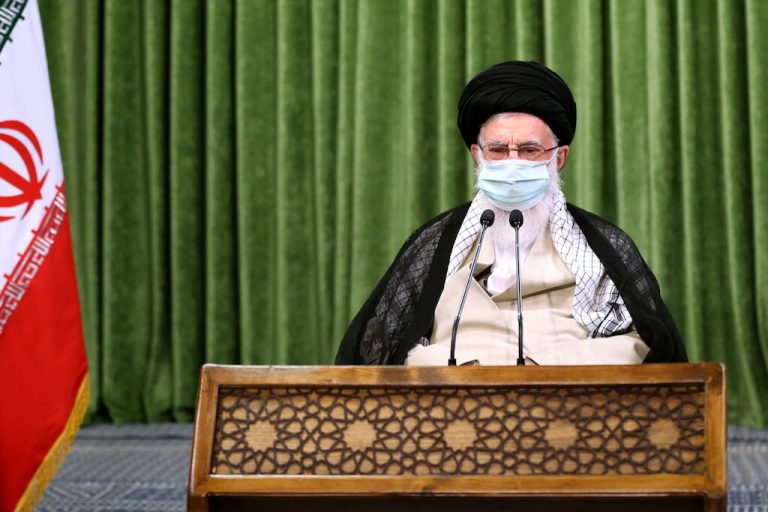 Inflation and the foreign exchange market 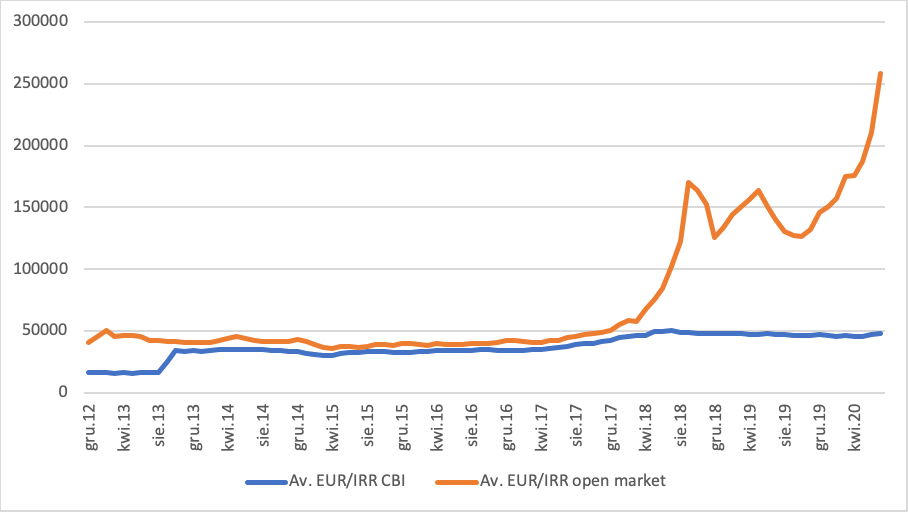 Chart 4 shows the most spectacular example of the sanctions’ impact on the Iranian economy. The drastic decline in the value of the rial, however, is also an over-interpreted example.

Reports on the Iranian currency focus on the free-market rate, which is the purchase price of a single physical dollar bill at a currency exchange office in Tehran. The buying and selling of physical hard currency accounts for a small fraction of the total foreign exchange market, possibly accounting for less than 20% of all currency transactions. In addition, Iran has four different, completely legal exchange rates (bank, traditional NIMA, electronic NIMA and currency exchange). The most important indicator (which, unfortunately, is rarely mentioned in reports) is the rate on the NIMA platform – a centralized electronic system created by the Central Bank of Iran in 2018 to facilitate the buying and selling of foreign currencies between Iranian companies. The NIMA platform is therefore a key platform for entrepreneurs, and thus for the entire economy. The currency exchange rate is a reference point for the people. It is of great psychological importance, but it is not crucial for the economy on a macro scale.

After convergence in June 2019, the difference between exchange rates and NIMA is steadily increasing, which means that the devaluation of the riyal in the free market is not the best indicator of its strength or an accurate reflection of inflation concerns. It should be noted, however, that trends to both courses are common and the NIMA course has also reached historic bottom.

A weak rial facilitates exports and makes imports difficult, which is a welcome phenomenon under the “resistance economy” operating in Iran, especially taking into account the fact that it is possible to settle accounts for oil exports by barter. 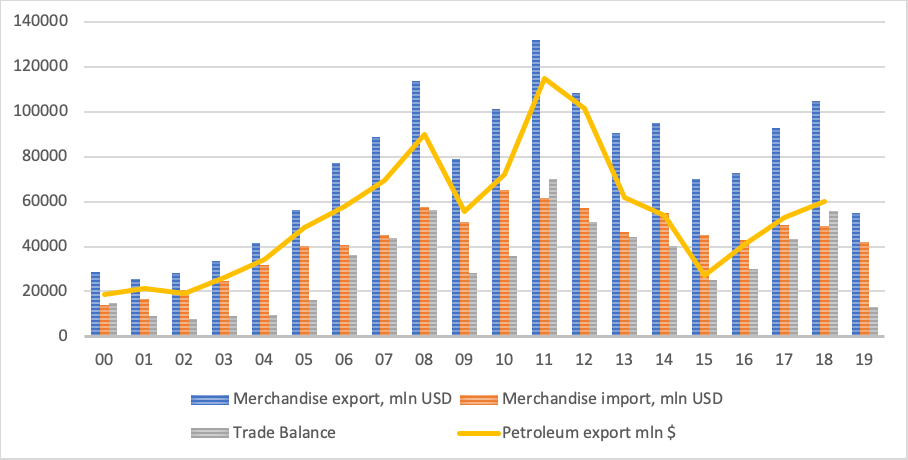 Charts 5 and 6 illustrate the impact of sanctions and the situation in the oil market on the country’s finances. Profits from oil exports in peak periods accounted for almost half of budget revenues, but now fall to the level of planned 9%. The market crash combined with the US multi-sector sanctions significantly reduced Iran’s export opportunities and led to the phenomenon of the current account deficit, which was particularly dangerous for Tehran. To make matters worse, the COVID-19 crisis has increased Iran’s budget deficit. The problem for the implementation of last year’s budget turned out to be, among others, too optimistic forecast for oil exports. The situation is similar for the current budget. At this point, it is worth noting that the exact revenues of Iran from the sale of oil are difficult to determine, because due to sanctions, the details of the sales are a closely guarded secret. Both Iran and the buyers are trying to hide the deal out of fear of a US reaction. What is certain, however, is that Iran was forced to sell its oil at a significant discount to entice buyers and make the risk of exposure to US punitive action profitable. In addition to offering oil at a lower price, Iran has historically used crude oil exports to repay past debts or current barter, meaning it has not, in fact, received any sales revenue. Without a significant relief in US sanctions, a drastic increase in oil prices, or a conflict between Saudi Arabia and / or Russia with India, China, Japan, South Korea or other major recipients of Iranian oil, Iran has no chance of pushing exports to 1 million barrels per day. The current level of gas prices and the forecast of the Iranian budget also remains a problem. Even if Iran were to sell oil in 2020 at the currently unlikely price of $65 a barrel, it would still have to export around 770,000 barrels per day to achieve the initially planned revenue of USD 18 billion.

The current account surplus, which was one of the main sources of capital for foreign exchange reserves, disappeared last year. Despite the decline in imports caused by government policy (resistance economy), a deficit was recorded for the first time since 1998. In turn, the balance of trade for non-oil trade in the period from April to December 2019 showed only a slight surplus, despite a decrease in imports by USD 1.2 billion (YoY). It should be noted, however, that the current account surplus in 1398 AH (2018/19 CE) amounted to USD 26.7 billion (the highest amount since 2011/12) as imports of goods during this period shrunk in nominal terms by almost 20%.

When analyzing the Iranian economy as a whole, it could be concluded that the country had a chance to recover from the recession in 2020. However, any positive trends were halted by the COVID-19 pandemic. In Iran, the restrictions related to it culminated in the Nowruz (Iranian New Year) period, which is a time of a significant increase in turnover in retail trade, services for people and tourism, i.e. industries that were most severely affected by the COVID crisis. The collapse of domestic demand and the temporary closure of borders for passenger and goods traffic have derailed the country’s manufacturing sector.

It should be emphasized, however, that despite the crisis and recession deepened by the epidemic, Iran’s economy is currently not in a state of catastrophic collapse. Iran still maintains tens of billions of dollars in reserves in accounts around the world that it can use to pay for imports. It also has significant foreign exchange reserves inside Iran. After the borders were reopened, exports resumed. Moreover, the network of bonyads (foundations) and their intensified charity activities limited the direct impact of the economic downturn on the population. Despite the gravity of the situation, there have so far been no signs of a systemic economic meltdown, a shortage of in-store goods or the suspension of regular deliveries of critical goods and services. In addition, the regime has proven in the past that it is capable of overcoming deep crises, including years of severe economic sanctions. In this case, for Tehran, a significant plus is the high degree of centralization of the economy, which is characterized by the direct involvement of government institutions and Sepah (i.e. the Islamic Revolutionary Guard Corps) in economic life, including production and trade of goods. This centralization improves the regime’s ability to adapt the economy to the new conditions created by the crisis.

In the face of the continuing pandemic, low oil prices and increasing US pressure, Iran is expected to see a 5-10% decline in GDP in 2020/21 and has a chance of 1% growth in 2022/23. The forecasts result both from the analysis of the period of negative impact of COVID-19 on GDP in 2020/21 and the two consecutive years of slight economic recovery recorded before the outbreak of the pandemic. Oil production in 2020/2021, 2021/22 and 2022/23 is expected to grow in line with long-term increase in world consumption, with prices rising, but not enough to fully address Tehran’s economic problems. The fiscal deficit will grow because the revenues will not reach the assumed levels and the anti-crisis measures increase the expenses. The expected growth in the budget deficit is likely to lead to further public debt issuance and consumption of reserves. Despite this decidedly unfavorable situation, assuming that the current macroeconomic trends continue, Iran will be able to survive the crisis years economically, return to the pre-pandemic state and enter the growth path around 2023.

The charts have been prepared by the author on the basis of data from Bank-e Markazi-ye Iran, Markaz-e Amar-e Iran, Int. Monetary Fund, World Bank and OPEC.