Claiming that Berlin is not paying enough towards NATO, on 15th June 2020 President Donald Trump declared a reduction in the number of U.S. troops stationed in Germany. If his words become reality, the contingent of US soldiers stationed in the NATO’s northern flank will be diminished by as much as 9 500. 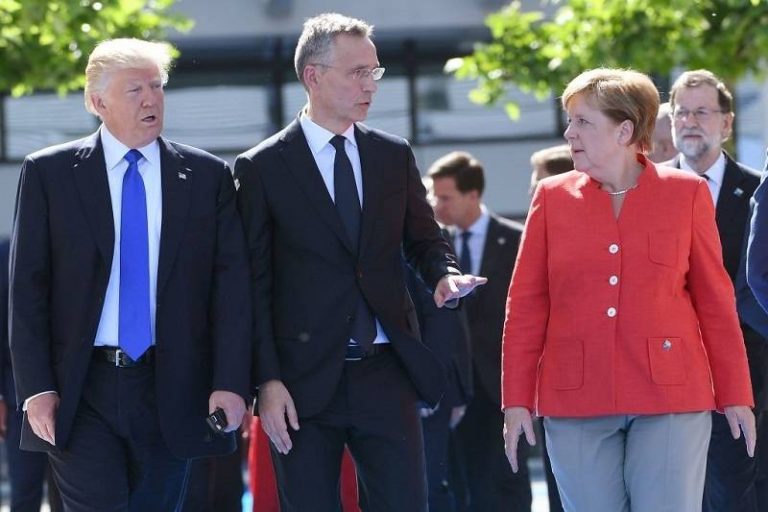 As per the The Wales Declaration on the Transatlantic Bond adopted at the Newport NATO Summit in 2014, all NATO members need to increase their defence expenditure to reach 2% of their state’s GDP by 2024, including the increasing of spending on technical modernization (20% of total defence expenditure) in the ten-year perspective. In the final summit declaration, the spending cap was included as a soft notation rather than a punishable requirement. This was a necessary compromise aimed at a large group of countries that were not so keen on increasing their defence budgets and not yet ready to take some of what was agreed in Whales as an obligation.

Since the summit six years ago many countries are still to increase their spending to the desired level. In 2019 the aim of 2% GDP being spent on defence was achieved by nine members: Bulgaria (3,25 %), U.S (3,24%), Greece (2,24%), Estonia (2,13%), Great Britain (2,13%), Romania (2,04%), Lithuania (2,03%), Latvia (2,01%) and Poland (2,00%). At the same time, rest of European member states were still under optimal level, including Germany, whose defence budget was as low as 1,38% GDP.
Today it seems that 2020 will bring the end to the free-riders era, that saw U.S. willingly covering the growing gaps in NATO’s expenses caused by NATO members avoiding the agreed defence spending. After weeks of rumours, President Donald Trump has officially declared that he is going to reduce the number of American troops stationed in NATO’s northern flank, saying: ‘we’re protecting Germany and they’re delinquent. That doesn’t make sense. So, I said we’re going to bring down the count to 25,000 soldiers.’

The POTUS decision was criticised by diplomats both from Germany and U.S. ‘America’s forward presence has never been more important than it is today, as our nation confronts the threats to freedom and security around the world posed by Vladimir Putin’s Russia and the Chinese Communist Party’ – said Liz Cheney, Republican Representative.

Noting that more open dialog is necessary in this case, NATO tried to be a mediator in the conflict between Washington and Berlin with little success. From NATO’s point of view, Trump’s decision is does not make any sense, especially from the military point of view. American troops have been stationed in Germany non-stop since as early as 1945. Thus, U.S. Army Europe has been a witness to the most crucial events in the German history, like the end of World War II and the Reunification of 1990. When the Berlin Wall fell, 2000 American soldiers were present all-around West Germany. Considering the past animosities, the beginning of the German-American military cooperation was quite a challenging undertaking. Defeated Germans were forced to accept Allied presence in their own country. This should also be remembered, that after the end of WWII all of German soldier were captured and sent to POW camps in US and Europe. In all, 425,000 German prisoners lived in 700 camps throughout the United States, many of whom never returning to their old homeland. Due to the power vacuum and the lack of defence capabilities, the Americans alongside the Brits and French decided to permanently remain in Germany, as well as in the whole Western Europe to provide security and balance to the growing threat from the Soviet Russia.

As of today, American soldiers are stationed in 41 bases and facilities scattered around Germany like 5th General Hospital – Stuttgart-Bad Cannstatt, Artillery Kaserne – Garmisch-Partenkirchen, or the Ramstein Air Base in Ramstein-Miesenbach – which is also the biggest American’s air base in Europe. However, the most important American base in Germany is located near to Stuttgart. This facility serves as the headquarters of American Army in Europe – US European Command (USEUCOM) – from where all American’s activities in all 51 European countries are being coordinated. The main mission of the US troops in Europe is to support NATO Allies, deter Russia, enable global military and humanitarian operations and counter trans-national threats in order to defend the Homeland. In total Germany is now home to more than 38 000 American troops, making Germany the second largest American contingent only to Japan.

It is important to remember that should Donald Trump’s decision to limit the overall number of American troops in Germany turnout to be true, the European security would be under serious threat. Firstly, any disagreement between Alliance members will be viewed as NATO’s unity being undermined, something that is extremely desired by Russia. Secondly, the Europe-US transatlantic relation would also feel the negative effects of this decision. Europe would no longer feel sure about U.S. support of European security issues. This is crucial also from the Polish point of view as Warsaw views the American presence in Europe as a security guarantee, deterring Russia and China away from the region. Thirdly and lastly, Donald Trump who is often called a “Game Changer” in international relations, seems to try to change American approach to foreign relations to be less euro-centric. However, doing so will make many believe that USA is no longer treating Russia as the main threat to global security, instead putting China as the greatest contemporary threat.

If the German contingent will ultimately be limited, the U.S is likely to want to relocate the 9 500 troops somewhere else in Europe. Many commentators suggest Poland as a new destination – both thanks to the close PL-US diplomatic ties and the strategic importance of Poland’s central location. However, Ambassador Kay Bailey Hutchison (Permanent Representative of the United States to the NATO) said that for now, Washington is still looking at where the US troops could be deployed to in order to be the most effective in protecting Europe and deterring threats to its security.

This article was originally published on “Polish Express”.