Extreme situations caused by the spread of COVID-19 disease have brought to light the deep-seated structural problems of many nations, highlighted political tendencies of those in power and intensified internal conflicts of many societies. Bosnia and Herzegovina (BiH) is no exception to this principle. The country has once again heard news of corruption, severe shortages in healthcare and weaknesses in its social security system. The infamous phenomenon distinguishing BiH, however, was the conflict which lasted over a month and made it impossible to use the loan granted to the country by the International Monetary Fund (IMF) – seemingly, the necessary means to save the crisis-stricken economy. 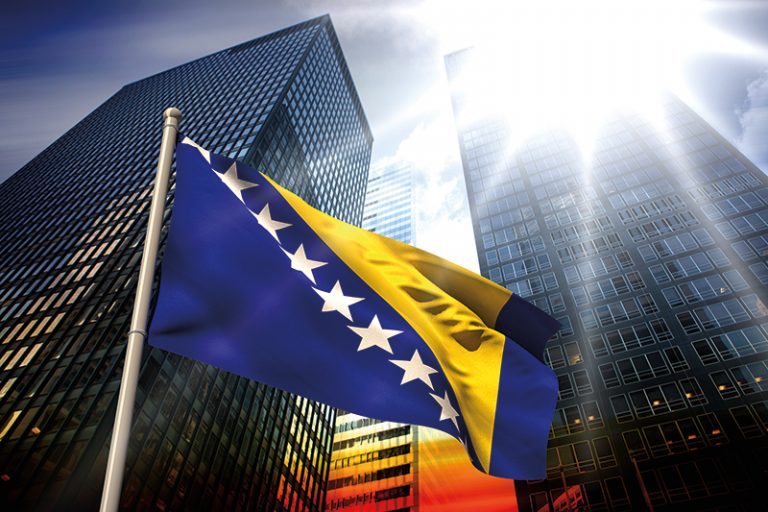 Bosnia and Herzegovina is one of the five countries, along with Albania, North Macedonia, Moldova and Kosovo, which have been supported under the Rapid Financing Instrument (RFI) by a loan dedicated to help the healthcare and to alleviate the economic consequences of the extraordinary situation caused by the pandemic of the new coronavirus. The EUR 330 million grant included a favorable interest rate (1.05%) and a grace period of 39 months. The allocated amount makes BiH the biggest beneficiary among the aforementioned countries of the scheme.

The future problems related to the loan were already predicted at the stage of drafting the letter of intent, required when applying for IMF’s aid. Politicians from the Croatian Democratic Union of BiH (HDZ BiH) were obstructing its sending, pressing for an unprecedented inclusion of the cantons (strongly autonomous units of BiH Federal administration) on a par with the Federation of Bosnia and Herzegovina, the Republika Srpska and the Brčko District, which are traditionally present in such documents. The compromise was reached on April 11, when the leaders of the three largest parties, assisted by the EU delegation, IMF representatives and the US Ambassador Eric Nelson, agreed on the distribution of funds, according to which the Federation of BiH accounted for 62% of the amount and the Republika Srpska for 38%. The smallest one, the Brčko District, was allocated half a percent of the sums allocated to the larger entities. The cantons were eventually regarded as constituents of the Federation.

Bosnia and Herzegovina’s administrative and territorial organization is based on the Dayton Peace Agreement (DPA) and the country’s constitution being its part. The document which ended the war lasting from 1992 to 1995, divided the country into the Republika Srpska and the Federation of Bosnia and Herzegovina. The former is distinguished by a relatively homogeneous population (82% of the inhabitants are Serbian) and a high degree of centralization. The Federation of Bosnia and Herzegovina, created in 1994 to end the fights between Croatian and Bosniak forces (Bosnian Muslims), was further divided into ten cantons. Each of them has its own parliament, government and a number of autonomous powers. The Federation is inhabited mainly by the Bosniaks (70%) and Croats (22%). The Brčko District is a separate administrative unit, in existence since 2000, which accounts for less than 1% of the country’s area. An extremely complex political system is a source of imperishable tensions, further, an extensive and costly administration effectively blocks the country’s development and creates a fertile ground for corruption at all levels of government.

After the approval of the International Monetary Fund’s board on April 23, the abovementioned EUR 330 million were transferred to the Central Bank of Bosnia and Herzegovina. According to the adopted procedure, a special decision of the Council of Ministers of BiH had to be delivered so that the Bank could transfer the funds to the relevant ministries. Despite the principles and formulations previously set out in the letter of intent, the Federal Minister of Finance – Vjekoslav Bevanda, continued to press for raising cantons to a rank equal to the other BiH’s components.

The conflict which lies at the root of the stalemate that lasted over a month is a divergent vision of the state system of the two most important parties of the Federation – the Bosniak Party of Democratic Action (SDA) and the Croatian HDZ BiH. The first one, due to the size of its political base, advocates Unitarianism and the transfer of competencies to the highest – state – level of power. The Program Declaration adopted at the party’s congress in September 2019, stressed the desire to pursue the creation of the Republic of Bosnia and Herzegovina – this name was is use during the war following the secession from the Socialist Federal Republic of Yugoslavia (SFRY). It was not until the peace agreement that the fights ended and the country was renamed as Bosnia and Herzegovina – a name accepted by all parties of that conflict. Furthermore, the party’s program included an idea that provided for the resignation of the current Presidium (three presidents representing the three constitutive nations of BiH) and the appointment of a one-man president. The SDA also opposes new administrative divisions and supports constitutional reforms that would centralize the system and decision-making processes within the country. On the other hand, the strongest party of Bosnian Croats is pushing for the idea of creating a third entity, which would consist of regions inhabited mostly by the members of this nation. It was this goal that was meant to be served by the unprecedented inclusion of cantons in the agreement with the IMF. Such recognition would give the cantons an international subjectivity and could legitimize the future aspirations of Dragan Čović, President of the HDZ BiH. According to the latest census, Croats represent 15% of Bosnia and Herzegovina’s population. The party of D. Čović currently holds power in three cantons – Posavina, West Herzegovina and Canton 10. In all of them the vast majority of the inhabitants are Croatian. In the Herzegovina-Neretva Canton, the HDZ BiH shares power with the SDA, which reflects the composition of the region’s population – 53% Croats and 41% Bosniaks. The second most important demand of the party is to change the way the heads of state are elected. Currently, BiH’s Presidium is composed of the representatives of three nations, whose ethnicity is not taken into account in the election. The aim of HDZ BiH is the principle that each nation will elect its own representative. The election of Željk Komšić, who, in the opinion of D. Čović, was chosen by the Bosniak electorate to represent the Croats, has given a new dynamic to these requirements. In his efforts to achieve even tighter decentralization and to strengthen ethnic divisions within the country, the Croat allied itself with Milorad Dodik, a Serbian member of the BiH Presidium. The foundation of his political strategy is to strive for the transfer of state competences to the level of the Republika Srpska, which his party, the Alliance of Independent Social Democrats (SNSD), has been ruling for years.

The nature of the canton economies ruled by the HDZ BiH, which are strongly dependent on tourism thus currently deprived of income, has led V. Bevanda to resign from the previously required clause and release the funds. In a decision delivered on June 3 to the Central Bank of BiH, the cantons were presented as an integral part of the Federation. The formal avoidance of their distinction took place after the approval by the Parliament of the Federation of BiH of the amendment to the budget for 2020, according to which 50% of the credit funds will go to the cantons. However, the repayment of the entire amount will be the sole responsibility of the Federation’s government. The budget amendment, favorable for the Croatians, was already adopted on April 28, which indicates the importance they attach to building a formal basis for their political agenda.

Withholding the necessary funds, apart from the immediate negative consequences for the country’s economy and society, sends a disturbing signal to the widely understood international community. The support of international entities still remains a significant part of Bosnia and Herzegovina’s finances. According to Andrew Jewell, the IMF representative in BiH, the current blockade of financial aid may have an impact on the organization’s future decisions regarding the cooperation with the country. Moreover, this situation does not facilitate the creation of an attractive investment profile of the country, in which the lack of such investments is so profound.

Author: Jakub Bawołek – a graduate from MA studies in international security at the University of Wroclaw. He gained professional experience in the media, the Polish Embassy in Sarajevo and the Chancellery of the Senate of the Republic of Poland.