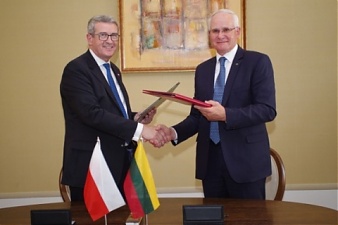 The deal aims to simplify academic contact between the two countries and tighten cooperation in the fields of higher education and science.

Minister Murdzek added that in both countries higher education was nearly simultaneously reformed so the previous agreement signed in 2005 in fact was not working, making recognising titles and degrees nearly impractical.

The visit of the Polish delegation in Vilnius was concluded with laying wreaths at Józef Piłsudski mausoleum, as well as at graves of Joachim Lelewel and Professor Wiktor Staniewicz, former rector of Stefan Batory University in Vilnius