A White Paper on the COVID-19 fight 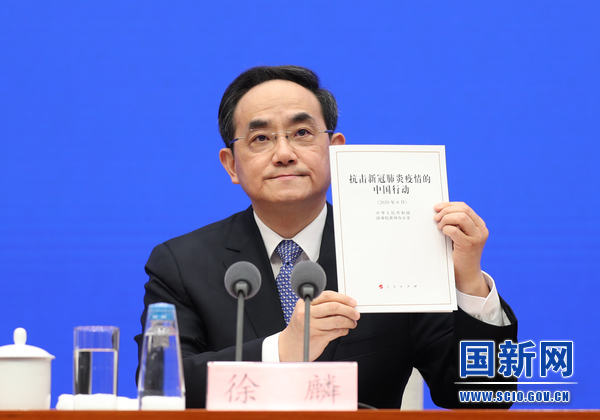 The State Council Information Office of the People’s Republic of China has presented a 65-page document entitled “Fighting COVID-19: China in Action”. The document consists of four chapters: 1) China’s Fight against the Epidemic: A Test of Fire, 2) Well-Coordinated Prevention, Control and Treatment, 3) Assembling a Powerful Force to Beat the Virus, 4) Building a Global Community of Health for All.

The first chapter shows the spread of the virus in China in the timeline along with the actions taken by the authorities. This part constitutes nearly half of the document. The quick reaction and activity of the authorities of the Communist Party of China (CPC) headed by President Xi Jinping were clearly underlined. As we read, “Through painstaking efforts and tremendous sacrifice, and having paid a heavy price, China has succeeded in turning the situation around.” The dating in this chapter began on December 27, 2019, when the spread of the virus was noticed. Moreover, the timeline lists the event of informing the World Health Organization and other countries in the world about the occurrence of coronavirus. The information on the last actions which are present in the document concern the end of May 2020.

The second chapter shows that centralized power was the key to success in containing the pandemic. The coordination of actions and the numerous meetings held by President Xi Jinping and Prime Minister Li Keqiang were helpful in this. Radical prevention and precautionary measures have been effective. The national legislation, which worked in the emergency situation, rapid adaptation of the hospitals to the prevailing conditions, application of modern technologies (big data, artificial intelligence), innovative methods of treatment and even the traditional Chinese medicine were also praised.

The following chapter was supposed to prove that the primary value for the party is the health and life of citizens, not the economic development. All forces, including the People’s Liberation Army (PLA), private and state companies, trade unions, the Communist Youth League of China, women’s federations, state services, but also volunteers, were brought together for this purpose. The work of the doctors as those who “Built a Great Wall against the virus, bringing light and hope to the nation at a dark time.” was praised. At the end of this section it was pointed out that the right decisions made are a success of the CPC heads and their leadership is “The most reliable shelter against storms.”

The last chapter shows China’s willingness to cooperate with the whole world in the fight against the coronavirus. The initiative was to be taken by Xi Jinping himself, which is confirmed by nearly 50 meetings and phone calls with the world leaders. China stresses that during the pandemic it shared its knowledge and own experience as well as provided financial and medical support to other countries. As usual in the case of party documents, there has also been a call for multilateralism and building a common future for humanity. The WHO was also strongly supported in playing the leading role in the fight against the pandemic.

The document is addressed primarily to Chinese society. It aims to present Xi Jinping’s actions in the best possible light. His name does not appear in the text as many as 45 times by an accident. For comparison, Prime Minister Li Keqiang, who headed the coronavirus team, was mentioned in the document only 7 times. Furthermore, Xi Jinping was presented as having a direct control over the offensive against the pandemic. This is to show the full activity of the leader and to blur the fact that he disappeared from the Chinese media at the beginning of the pandemic. Moreover, the text recalls the current six goals of China’s economy three times. These goals, announced during the annual session of the Chinese Parliament, are the strategy for the near future. Likewise, the report reinforces a long-time built narrative about supporting other countries, especially the developing ones, in the face of the coronavirus. The fact of hiding the beginnings of the Wuhan pandemic has been overlooked, instead restating that the Chinese authorities have shared information about the virus with everyone as soon as it was possible. Attention was drawn to the successful use of big data technology, which may authorize a wider use of the social credibility system in the future. The WHO, which has been echoing Chinese theses from the beginning, was also supported in coordinating the study of the pandemic. The organization has become, in a way, an ally of Beijing on this issue and seems to continue such stance.