Speaking at Russia’s Navy Day festivities, Russian President Vladimir Putin said nothing new: he stressed his country’s military power and declared further buildup. Attending the main celebrations in St. Petersburg, the Russian leader received the parade of warships. Large-class festivities were also held in other main ports in the country. But this overly optimistic image of Russian naval forces does not correspond with the reality. Russia’s navy shares its fate with other types of the state’s armed forces. Some units have been upgraded, and their activities show Russia as a maritime super-power. But most of them are furnished with old equipment, portraying the navy as being the least heavily invested arm of the Russian Armed Forces, as exemplified by a series of accidents or fires that have recently afflicted Russian vessels. 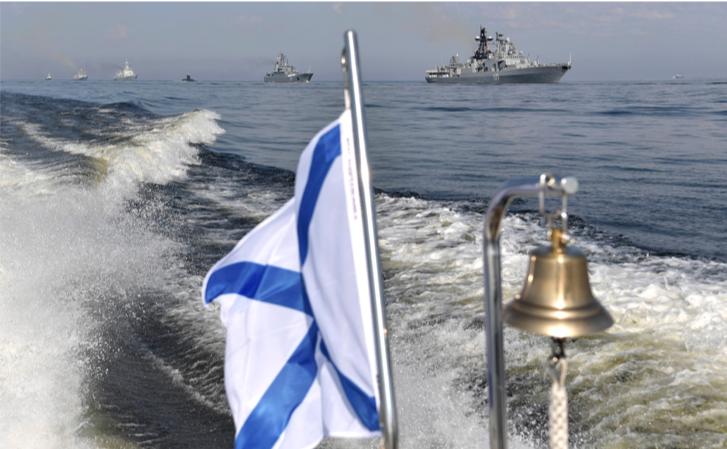 The parade was kicked off on the Neva River, in St. Peterburg, known as the maritime capital of Russia. This year’s event included 43 warships and submarines. A total of over 4,000 troops from Russia’s all main naval formations (Baltic Fleet, Northern Fleet, Pacific Fleet and Caspian Flotilla) took part in the festivities. Among the ships that passed in front of Vladimir Putin and thousands of Russian people were the missile cruiser Marshal Ustinov and the country’s two frigates Admiral Gorshkov and Admiral Kasatonov. Also, China and India sent their warships to participate in the event. While observing the parade, Vladimir Putin said his country’s navy ensures the security of the country, its national interests and can properly repulse any aggressor. Naturally, his words are exaggerated, with the Russian fleet being incomparable to the U.S. Navy while imbalances of power are even more profound when compared to NATO naval forces. Assisted by Russian Defense Minister and Navy Commander-in-Chief Admiral Nikolai Yevmenov, Vladimir Putin noted that Russia’s maritime glory will be even more significant after it builds “a unique in its possibilities fleet, designed for a long time.”

Apart from how vague Putin’s statement may seem, it is worth emphasizing that the contemporary condition of the Russian navy is far from meeting the president’s ambitions. Compared to the country’s strategic missile forces or airborne troops, Russia’s naval arm stands outs in terms of how promptly it is upgraded and what level of full combat readiness it has achieved. Involvement in the Syrian conflict – while seeking to patrol coastal and other waters – has eventually put the Russian navy at the edge of its operational efficiency. Combined altogether, heightened expectations and mounting political pressure give rise to human error and technical failures. As for the latter, Russia has recently eyed the incident of the deep-water apparatus Losharik or the sinking of the navy’s biggest dry dock that served to repair the largest warships. Added to this some long-lasting problems, such as those with multiple damages of Russia’s only aircraft carrier, it is hard to believe Putin’s words about the fleet’s bright future. This is also because the Kremlin and Russian generals find it essential to develop other branches of the country’s armed forces, putting the navy aside.