The Us, Poland And Ukraine Sign A Trilateral Gas Agreement

A memorandum on energy cooperation signed on August 31 in Warsaw between the United States, Poland and Ukraine is yet another stage in the U.S. expansion of liquefied natural gas (LNG) into the Central and Eastern European markets. What seems to be a mere business plan to gas companies from the states of Texas or Louisiana is, however, of great significance for the energy security of the countries in our part of Europe. It will reduce dependence on Russian gas, and, as a result, hit the interests of Moscow, at the same time bringing Ukraine closer to the West and strengthening the status of Poland as a key U.S. ally in this part of Europe – not only in terms of the military sphere, but also the energy one. 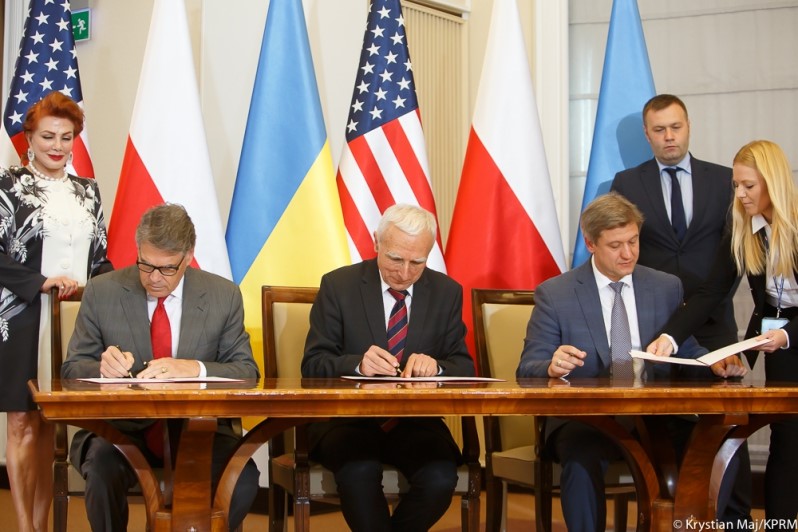 The memorandum of understanding on trilateral cooperation in the energy sector was signed somewhat backstage during celebrations marking the 80th anniversary of the outbreak of the Second World War, an event which gathered many leaders and important state delegations from all over Europe and the U.S. in the capital of Poland. The document was signed by Rick Perry (the U.S.), Piotr Naimski (Poland) and Oleksandr Danylyuk (Ukraine). The latter, the current Secretary of the National Security and Defence Council of Ukraine, said that his country has not been buying gas from Gazprom for a few years now. Now is the time to take the next step, that is, “to gain access to LNG, the gas that flows mainly from the United States”. In order for this raw material to reach the Ukrainian market, a special pipeline connecting the gas systems of Poland and Ukraine is to be built. Thanks to the connection, U.S. LNG which will be first delivered to the Świnoujście LNG Terminal and then it will be transported further east. The expected capacity is to be up to 6 billion cubic metres of gas per year. According to U.S. Energy Secretary Rick Perry, the signing of the memorandum is “an amazing ‘win’ for the energy security, the economic security and the national security of all three countries”.

One cannot help but notice, however, that Poland will play the key role in this arrangement. The agreement with the Ukrainians is the first step towards turning Poland into a gas hub through which the Americans will be able to sell their own LNG to other Central and Eastern European countries. Perhaps even to Belarus at some point in the future. Importing more gas from across the ocean to Poland is simply a blow to Russia’s strategy. Taking into account the fact that, among others, the Yamal contract with Poland, which, to say the least, is extremely unfavourable for the Polish side, is slowly coming to an end, the Russians are trying to secure their position in Central and Eastern Europe by using other indirect methods. One of these is to pump enormous amounts of gas to Germany across the Baltic Sea – this is precisely the reason why Nord Stream 2 is currently being built. The pipeline would make Germany a giant hub from which Russian gas would flow into the country’s neighbouring markets. Including, of course, Poland. Thanks to LNG from the U.S. as well as the Baltic Pipe project, which is currently in the implementation phase, Warsaw has now a few alternatives, moreover, in the best-case scenario, when the Yamal contract expires, Poland will be able to break dependence on Russian gas completely. Perhaps, in the future, Poland will also be able to export American, Norwegian or even Qatari gas surpluses to its neighbours.