Turkey’s Invasion of the Syrian Kurds

Codenamed Operation Peace Spring, the Turkish offensive into Syria is likely to shift the balance of power in Syria while deteriorating Ankara’s relations with the West. Syrian Kurds, deprived of American support, will be forced to seek agreement with Damascus, with Russia serving the role of a proxy. By ordering U.S. forces out of northern Syria, Donald Trump paved the way for Turkey’s incursion while risking weakening Washington’s position across the region, a decision from which Russia stands to gain the most. 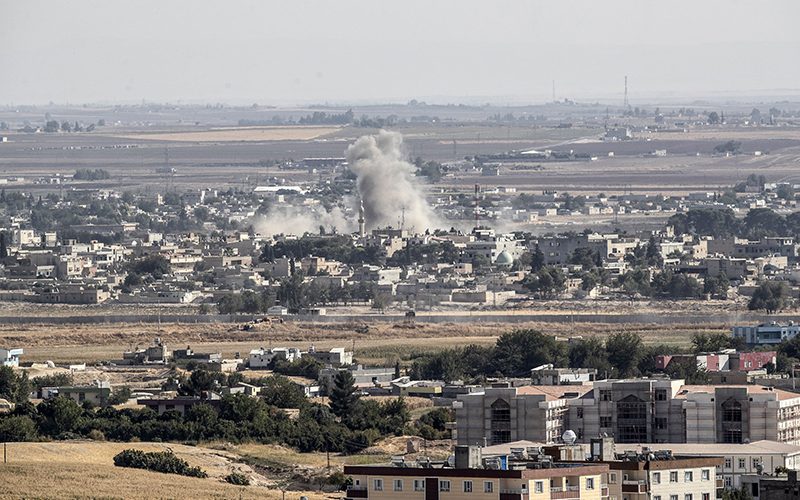 The United States is planning to evacuate up to 1,000 troops from northern Syria who so far had fought alongside the mainly-Kurdish Syrian Democratic Forces (SDF) combatting Daesh and capturing the city of Raqqa, formerly the Islamic State’s “capital.” The U.S. military presence protected the Kurds against a Turkish incursion, with Ankara’s leading priority in Syria to nip in the bud all efforts to create Kurdish autonomy. Not surprisingly, almost immediately after the U.S. retreat from the Syria-Turkey border, Turkish forces –– along with their allied Free Syrian Army fighters –– pressed an offensive against the Syrian Kurds. As declared, the operation’s goal is to establish a 30-kilometer safe zone that separates Turkey from the Kurdish-controlled areas of Syria. During the Syrian сivil war, the Syrian Kurds managed to build a para-state structure that covers almost a third of the territory of Syria and is inhabited by at least 2 million people. The state has an efficient administration and its own armed forces. Turkey’s Recep Tayyip Erdogan sees Kurdish autonomy in Syria as a way more significant threat than that presented by jihadists or al-Assad’s regime. An autonomous region in Syria could potentially bolster the Turkish Kurds’ efforts to declare independence. It is no secret that Syria’s People’s Protection Units (YPG) holds close links to the Kurdistan Workers’ Party (PKK) that has long been at loggerheads with the government in Ankara.

Despite widespread criticism from the international community, the Turks, and especially their Syrian allies, have committed violent crimes against civilians in a bid to sow chaos and force the Kurdish population to flee in the face of a forthcoming invasion. Turkey will probably attempt to settle abandoned cities, villages, and houses with Syrian refugees that have been stuck in camps on Turkish soil. There are about 3.5 million Syrian refugees living in Turkish detention centers. Erdogan will try his utmost to relocate as many as possible to the safe zone, mostly the Arab and Sunni population that is hostile towards both al-Assad and the Kurds. But fierce battles, artillery shelling and air raids that raged between the two sides, alongside a general mobilization call among the Kurds and civilians forced to flee, may prompt the possible rebirth of ISIS. Never before have jihadists suffered a total defeat, and now they are ready to launch an attack, taking advantage of all of the Kurdish forces being deployed to the north. There is also the problem of thousands of Daesh fighters currently being kept in detention. According to some reports, a dozen or so who boast combat experience have managed to escape.

Moscow should feel satisfied with how events have unfolded in Syria – at least at this stage, with a door opened to find an ally in the Kurds, a former U.S. ally in the region. It is to be expected that Moscow will seek to serve as mediator in talks between al-Assad, the Kurds, and Turkey. As Trump is no longer interested in upholding an alliance with the belligerent militia that served a leading role in combatting Daesh, the Kurds could agree on cooperation with Moscow and Damascus. Facing the Turkish incursion, the Syrian Kurds may make concessions in their talks with al-Assad’s regime. Earlier, the Kurds – shelled by the Turks and their allies –– came to an agreement with the Syrian government forces. While dealing with the Turkish assault, they may opt for the lesser evil, recognizing Damascus’s sovereignty and a more limited autonomy for their people. Prior to the Turkish attack, a representative of the Kurdish authorities said that Damascus and Russia might launch talks if the United States withdraws its forces entirely from the Turkish borderland. Moscow’s goal should be to narrow down the scale of the Turkish assault by taking advantage its good ties with Ankara. It is neither in Russia’s nor al-Assad’s interest to see the victory of Turkey and the defeat of the Kurds, a result that would bolster Erdogan dramatically in Syria. In that case, it is possible to use the Kurdish issue as a bargaining chip. Abandoned by the Americans, the Kurdish forces will have no other choice but to make a deal with al-Assad in a move that could bury all hopes for a federalized Syria. The regime will achieve yet another success in its efforts to regain control of the country, and Moscow will claim all the credit, being able to say it managed to save the Kurds from slaughter. This – in the context of Russia’s rivalry with the United States both in Syria and across the Middle East – hints at a crucial victory for the Kremlin.

The Kremlin must have been aware of Turkey’s plan to launch an assault. Russia greenlighted Ankara’s decision, hoping to be given a free hand to smash Syria’s last rebel-held enclave of Idlib. The Kremlin is delighted to observe Donald Trump’s PR failure and the U.S. withdrawal from Syria while getting rid of the sole actor that could bar it from implementing its goals. Moreover, Moscow hopes to see a deeper conflict between Turkey and its Western NATO allies. Political turmoil has shaken Washington as a result of the White House’s decision to abandon its Kurdish allies. Donald Trump has been accused of betrayal and making concessions to Russia, Iran, and Turkey. The president has even faced a swift torrent of Republican criticism. It is clear that Trump has no intention to clobber Erdogan (see the Turks’ buying Russian-made S-400 systems), but if the situation in Syria slips out of control, he may be forced to do so, by both the U.S. Congress and the Pentagon.