Tensions Rise in the Black Sea

Moscow’s annexation of Crimea from Ukraine has built up Russia’s military capabilities in the Black Sea. Not only did the Kremlin push Ukraine out from the basin, but it also made its way for testing its missiles there. In doing so, Moscow has made attempts to pose a threat to NATO members in the Balkans as well as it has set a foothold for a plausible offensive in the Mediterranean. 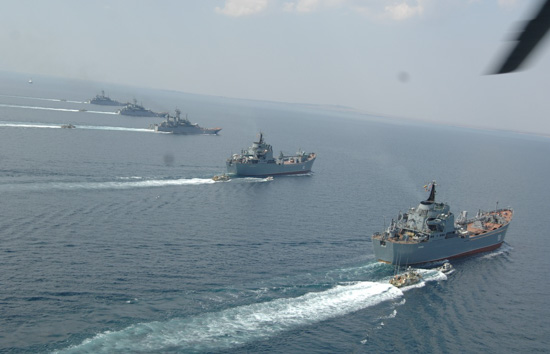 On May 28, the Russian Defense Ministry said the crews of Azov, Saratov, and Novocherkassk amphibious ships of the Black Sea Fleet carried out an exercise with artillery firing and the loading and landing of troops. At the first stage of the exercise, they all conducted training on air defense – with the participation of the naval aviation. During the drills, the crews fired at coastal targets and unloaded the personnel. This might have grabbed the attention of a U.S. P-8A Poseidon reconnaissance aircraft right off the Crimean shore. For over two hours, the aircraft flew 80 kilometers off Crimea at an altitude of between 5,700 and 7,700 meters. Earlier, while flying from Italy’s Sicily to the Black Sea, a Russian fighter Su-35 made a dangerous endeavor to intercept the U.S. jet. The Black Sea drills are yet another part of Russia’s heightened activity in the Black Sea basin. Likewise, on May 23, the Russian submarines, Rostov-on-Don and Kolpino, performed a live-fire test in the Black Sea. Instead of warheads, the test-fired missiles had recording equipment. Both are armed with Kalibr long-range cruise missiles. Also, these are Varshavyanka-class submarines. The Black Sea Fleet had already earned six units of that class. The Fleet’s latest drills show Crimea’s military importance for Russia. The peninsula no longer performs a defensive role; instead, Russia seeks to turn it into an offensive stronghold. As announced in March this year, the Black Sea Fleet will receive a batch of Project 22350 guided missile frigates able to carry Kalibr and Tsirkon missiles. Russia’s sole frigate of that type is the Admiral Gorshkov. The other one, the Admiral Kasatonov, is undergoing trials. Two more frigates of the class are under construction: the Admiral Golovko and the Admiral Isakov. They are to join the Navy in the next two years. They may all end up in Sevastopol in Russian-annexed Crimea. With them, the whole balance of power might change throughout the Black Sea basin, and certainly, this comes as a response to the U.S. growing missile potential on Romanian soil. In addition to Kalibr cruise missiles that Russia had fired at IS targets in Syria, the country’s brand-new frigates will be outfitted with Tsirkon hypersonic cruise missiles.