A Staged Death of a Journalist

Prosecutor General of Ukraine Yuriy Lutsenko has announced the success of the staged murder of the Russian journalist Arkady Babchenko. The President of Ukraine Petro Poroshenko, who has already started the battle for re-election, also congratulated the performers of the operation, especially the journalist. Prosecutor General’s Office informs the general public about the arrestment of subsequent members of the Russian web, which had on its checklist over 30 names of people to get rid of. However, not everybody is enthusiastic about such methods of action of secret services. 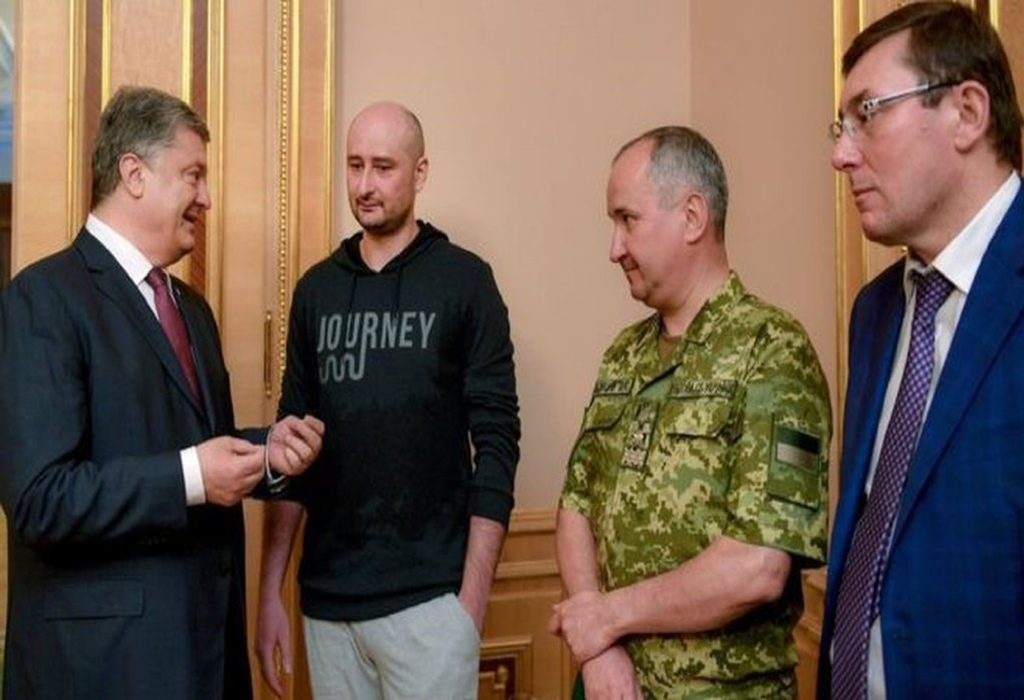 According to many Kiev journalists, professional and effective secret services like silence. What we observe now is rather an element of a hybrid warfare, a part of some political game. Within this context, they bring back the real murder of Georgiy Gongadze, the founder of the Internet newspaper “Ukrayinska Pravda”. The murder resulted in weakening the political and economic position of the then President of Ukraine Leonid Kuchma and the increase in Russian influences on Ukraine. One can still argue over the role of the Russian secret services and at least a part of Ukrainian oligarchs in the “Gongadze” operation, who was the most engaged one, and who paid for what; but nobody doubts that the death of the journalist was used for the political purposes. He was not an aim, but a means to an end, a “prop”. Experienced Kiev journalists remind that the recordings from the wire in Kuchma’s office played the most important role in the case of Gongadze. Recordings appeared just after the Gongadze’s disappearance and became public thanks to the assistant of the deputy for the Verkhovna Rada Oleksandr Moroz, the leader of the Socialist Party of Ukraine, Yuriy Lutsenko, the current Prosecutor General of Ukraine. Do these plots have anything in common?

In that time, Lutsenko also served as a “prop”, but he was in a much better situation than Gongadze. Time will probably tell and disclose the political context of the staging titled “Babchenko”. Prosecutor Lutsenko is also being reproached for his latest failures in the cases of Saakashvili and Savchenko. The political context of the Babchenko plot may be connected with the internal political battle for the presidency in Ukraine. Does this story reinforce the Poroshenko’s position? No, due to the ambiguities and moral aspects it is rather weakened. Moreover, it puts his subservient secret services in a bad light as for the public opinion they should obey the rule of being politically neutral. Now, they have to excuse themselves that they do not participate in any political game.

This was like a poor action film. On Tuesday, May 30 this year, the Ukrainian police informed that Babchenko was shot in front of the door of his own flat. The next day, the Security Service of Ukraine (SBU) announced that the journalist was alive, and his murder had been staged to defeat the operation of the Russian secret services, which were planning a real assassination. During a press conference with the participation of the Prosecutor General, Babchenko said that he had taken part in the SBU operation voluntarily.

Babchenko described with details that during the operation pig’s blood was used and a make-up man was hired. His wife, who found his body on the staircase and called an ambulance, was not aware of the staging. In the morgue, Babchenko changed his clothes and, as he described during the conference, he was watching the report of his own death on the TV. Fortunately, his wife did not participate in the conference and her opinion on the actions and choices of her husband are not publicly known.

There is a question: why Babchenko agreed to take part in the staging? By this, he eliminated himself from the profession of a journalist. Now the staging and a scene in which he lies in the pool of his blood in front of the door of his flat will become his “trademark”, probably forever – as a role attached to an actor. Could such a person, talking about watching the staging of his own death on the TV, be a reliable and independent representative of the general public? Which politician would like to give him an interview? With every text written by Babchenko, the reader would be wondering whether there is any hidden agenda.

Defenders of Babchenko, of Prosecutor Lutsenko and of SBU claim that there is a war – between Ukraine and Russia – so no holds barred, including the provocation and staging. But they forgot that the war is about winning with the opponent, not providing him with ammunition, even in a propaganda warfare. The “Staging” operation was also criticised by the western media. The case touches the fundamental issues for the press independence and the rule of law. Not to mention the basis thesis: professional and effective secret services value silence.