Russia’s Plan For Libya: Diplomatic Solutions Instead of Hired Guns

Following a series of setbacks for Russian-backed military commander Khalifa Haftar, there comes a severe threat of the collapse of the Libyan National Army (LNA) and the Tobruk-based government. This would impair Russian influence on Libyan territory. Thus once forces loyal to Libyan strongman Khalifa Haftar failed to seize the whole country, the Kremlin is seeking to bolster efforts towards compliance with Russian-Turkish bilateral agreements on a ceasefire in Libya. 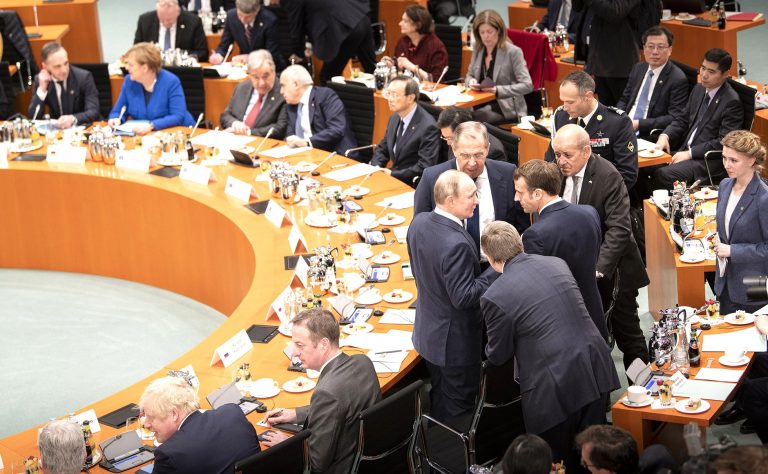 Russian President Vladimir Putin on June 10 spoke over the phone with his Turkish counterpart Recep Tayyip Erdogan to discuss the latest situation in Libya, according to the Kremlin press service. Russian and Turkish leaders vowed to reinforce a mutual bid towards the soonest end of warfare in war-ravaged Libya. As they said, Libyan civil war intensifies despite conclusions made at the Berlin conference in January this year, an event aimed at plotting a path to peace in the country. The day before, Putin held a phone call with German Chancellor Angela Merkel, where both also expressed their concern over an escalation of fighting in Libya while calling for the soonest ceasefire. “The Russian side positively assessed the diplomatic efforts made by Egypt,” the Kremlin press service said. Before Putin held talks with Merkel, Russia’s Foreign Ministry said that a new Egyptian peace initiative for Libya must be the main forum to decide the future of the country. Put forward by Egyptian President Abdel Fattah al-Sisi, the proposal envisages an elected presidential council, with representatives from Libya’s all regions, ruling for an 18-month transition period until general elections are held. Furthermore, it prescribes the disbanding of militias to give state forces a monopoly over power as well as the withdrawal of foreign troops from all Libyan territory.

Once forces loyal to Libyan renegade military commander Khalifa Haftar have had setbacks in recent weeks in Tripoli and fled eastwards to the city of Sirte, an immediate ceasefire would halt an offensive launched by Libya’s UN-recognized government, with military support from Turkish drones, military tacticians, and thousands of mercenaries relocated from Syria. Even Turks would find it hard to ask Libyan Prime Minister Fayez Mustafa al-Sarraj to sit at the negotiating table. Ankara seems to be dragging its feet over it while the military situation throughout Libya is highly conducive to its interests. For Turkey, it is a trump card in its talks with Russia over a possible agreement in Libya. In addition comes the grappling attitude of other conflict-embroiled actors that voice concern over a Russian-Turkish deal that could somewhat mirror that already made in Syria. Moscow is reaching for diplomatic solutions, with Wagner Group contractors in Libya having been evacuated in May in a move that contributed to Haftar’s retreat. Kremlin officials are likely to withdraw their support for the Libyan strongman if he is the top reason preventing al-Sarraj from initiating talks with eastern-based politicians. As he gained control of Cyrenaica, Haftar knows it very well. Earlier he had just alleged that his Libyan National Army was nothing but a military arm of the Tobruk-based government, a body competing with Libya’s UN-recognized Government of National Accord in Tripoli.