Putin in Austria: Friendly Visit among the Gas Fumes

It is not a coincidence that Vladimir Putin headed to Vienna to make his first foreign trip since being sworn in for a fourth term. Austria has always been considered as one of Russia’s friendlier EU member states. Now cooperation between both countries can be reinforced thanks to the presence of the pro-Russia Freedom Party (FPÖ) in the Austrian government. But regardless of ideological issues, gas cooperation is the main foundation of Vienna’s good relations with Moscow. And for Mr Putin, a visit to the capital of Austria is part of a new policy of warming relations with Europe in order to abolish sanctions. 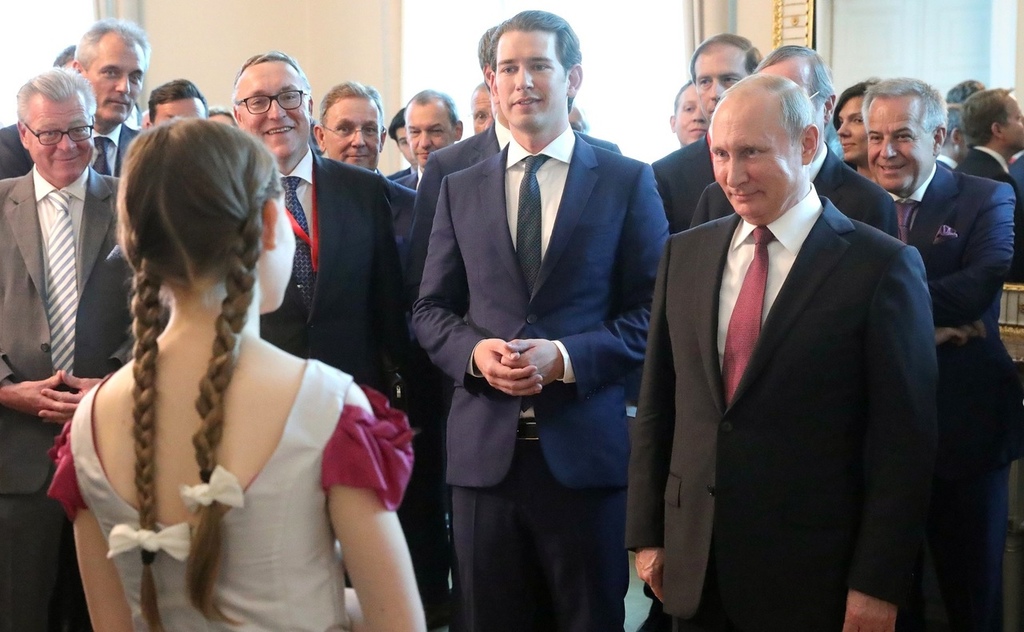 On June 5, Russian President paid a one-day state visit to Vienna. It is Mr Putin’s first foreign trip since his reelection for a fourth term. Austria has been chosen for several reasons. First of all, it is about strengthening the image of Russia as a reliable and cost-effective partner for Europe in the area of gas supply. Secondly, Russia seeks to tighten its economic cooperation with Austria. Thirdly, Austria takes over the rotating EU presidency in July and the Kremlin will pursue to lift or, at least, weaken sanctions imposed by the European Union. It needs to be mentioned that Austria has now one of the pro-Moscow political coalitions in Europe. In addition, it was also about some image issues: Mr Putin knew that he would be well received in Austria that is not associated with intra-EU conflicts (such as Hungary).

It was not a coincidence that the visit had been marked by the 50th anniversary of Russian gas deliveries to Austria. Both the Austrians and the Germans advocate for Russian gas import as well as they defend the Nord Stream 2 project where the state-owned energy company ÖMV is one of the investors. The project has been widely criticized by international players. The Americans push to pause the investment whereas Ukraine and Central Europe are against such a solution. It does not come as a surprise that the Kremlin seeks every positive statement from European leaders. After the talks with Mr Kurz, Russian President declared that Austrian Chancellor had confirmed that “Austrian authorities assessed the project as purely economic one”.

Austrian President Alexander Van der Bellen stated that there was no point in changing Russian gas to American LNG because it was “two or three times more expensive”. Mr Putin’s visit to Vienna was also an occasion to announce that Russia’s gas giant Gazprom and Austria’s ÖMV energy had signed a new deal to extend Russian gas supplies to Austria until 2040. The hitherto agreement was in force until 2028. Gas is one of the most important components of the economic cooperation between both countries. Interestingly, the Kremlin particularly hopes for its development since the country struggles against arduous sanctions and economic slowdown. Putin boasted that Russia’s trade turnover with Austria increased by 40.5 percent in 2017. In terms of direct investments, Russia is the second largest foreign partner in Austria (20 billion euros per year), giving way only to Germany. During the visit, representatives of both countries signed a number of interstate economic agreements.

In addition, political issues were no less important. Since the Cold War period, Austria has been considered as one of the most important European “doves” when it comes to policy towards Russia as evidenced by Austria’s reaction after the recent poisoning of a former Russian spy. Unlike most EU countries, Austria opted not to expel any Russian diplomats over the Skripal case. Austria has been governed by the alliance of the People’s Party (Kurz) and the Freedom Party (Strache). The former is positive towards Russia mostly for economic reasons whereas the latter support Moscow also for ideological reasons. The Freedom Party is one of the most pro-Russian political forces in Europe. They represent both Eurosceptic and anti-liberal views. Interestingly, they have even signed a cooperation agreement with the ruling United Russia party.

On July 1, 2018, Austria takes over the Presidency of the Council of the European Union. Moscow would like Vienna to become a bridge between West and East, especially when it comes to lifting sanctions. Mr Kurz declared that even if he supported the EU sanction against Moscow due to European solidarity, he also counted on the progress that would allow the restriction to be gradually relaxed. Such a state of affairs is tightly connected with the improving situation in the Donbass, which can be promised by Mr Putin himself (as evidenced by the UN peacekeeping mission). Next week, Mr Kurz is due in Berlin for a meeting with German Chancellor Angela Merkel, with whom he may discuss the aforementioned issue.

According to Mr Putin, both the European Union and Moscow have interest in lifting EU sanctions against Russia. The decision to extend EU restrictions must be taken unanimously every six months. The Kremlin is pursuing to build a coalition of countries that would support the idea of relaxing the sanction. It needs to be added that Austria’s neighbor, Italy, is now governed by the populist Moscow-friendly FiveStar Movement (M5S)–Northern League government. Both parties have called for the sanctions regime to be lifted. The issue has already been discussed by Italy’s new prime minister Giuseppe Conte.