Pompeo in the crosshairs of China

In recent weeks, US Secretary of State Mike Pompeo has become a frequent target of attacks controlled by the Chinese media authorities. This is most probably a response to the intensification of US statements on the origin of the coronavirus. 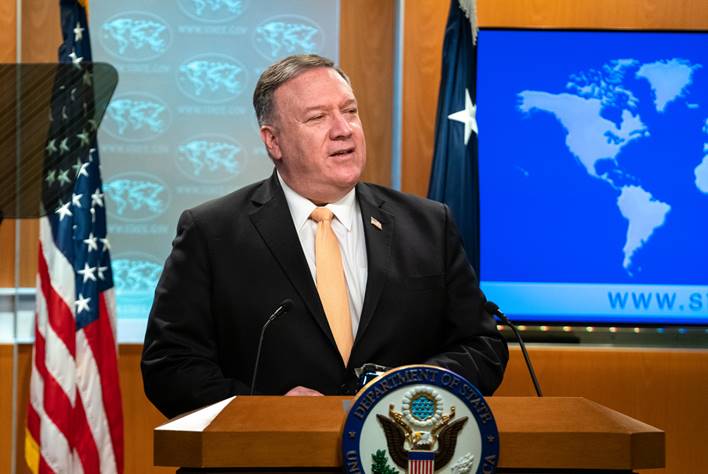 An increased campaign against Pompeo began in early May when he stated that he saw evidence that the pathogen could have escaped from the viral laboratory in Wuhan. He added that “China has a long history of infecting the world and running research centers that do not meet basic standards. This is not the first time the world has been exposed to viruses as a result of a failure of a Chinese laboratory.”

Soon an article entitled “Pompeo is the worst secretary of state in the US history” appeared on the Chinese news portal Xinhua. The author began to enumerate investment and cash promises of the United States for other countries that did not materialize. The Secretary of State was accused of demagogy, political paranoia and an attempt to use the pandemic to discredit China. By comparison, Beijing was presented in a positive light, as a truthful and good-natured player on the international stage.

The Chinese international CCTV television called Pompeo “The devil who thoughtlessly spreads poison and lies.” His lack of knowledge was criticized in addition to stressing the values he is supposed to follow – “to lie, cheat and steal.” The People’s Daily attacked Pompeo and former White House advisor – Steve Bannon, calling them “a pair of lying clowns.” Bannon was described as “a living Cold War fossil” as well as accused of racism and xenophobia. A week earlier, he stated in a TV interview that China had led to a “biological Chernobyl.”

The Global Times, known for its hawkish views, considered Pompeo a threat to world peace. According to the portal’s journalists, such lies on the part of the US “will not make America great again”, and putting the blame for pandemic on China is a strategy for winning the November presidential election. A short-animated film entitled “When Pompeo meets science”, in which, in response to the doctor’s answers who has a different opinion and gives evidence that coronavirus does not come from a laboratory in Wuhan, Pompeo keeps repeating this is not the case. He is presented as “paranoid and stupid.”

The Chinese media use several methods of communication in such cases. They often refer to sources from articles by American and WHO journalists, who have a different or more conciliatory opinion, in order to substantiate their narrative. The Chinese media often cite the helplessness of the US in the fight against coronavirus as a justification for attacks against the authorities of the Communist Party of China. Furthermore, they highlight China’s positive role on the international arena and the material assistance it provides to other countries. This is supposed to situate the Middle Kingdom as the current leader in the fight against the coronavirus.

Tough rhetoric of Washington and Beijing leads us towards a new Cold War, also on an ideological level. As the recent verbal clashes on Twitter between the US ambassador and the Chinese ambassador to Poland show, both sides are not going to come to an agreement, but present their own vision of the truth about the pandemic to the world. News articles about a possible war between the US and China are beginning to appear as the scale of the tension between them is gradually increasing. In any case, Poland and the countries of our region should carefully observe the current events in Asia as well as the messages and movements of the decision makers of both powers.