80 percent of Poland’s electricity comes from coal. Along with the rocketing costs of CO2 emissions and the higher demand for energy, its prices are going down, a tendency that raises concern on the Vistula. Poland’s energy transformation is a must, and renewable energy is not enough: the country will need nuclear power plants. 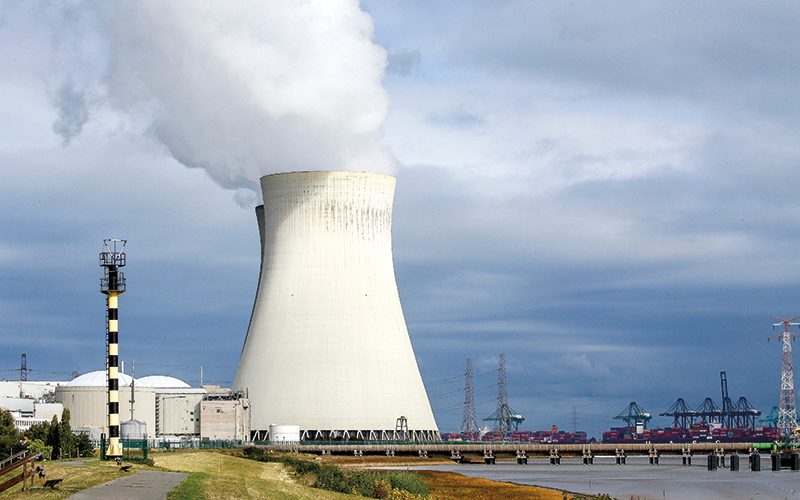 Poland is often referred to as a coal-state; indeed, the Polish energy sector does not enjoy a good reputation in the European Union that is gradually sailing away from using black gold. Following World War II, Poland’s energy industry was being built on the basis of the sources of hard or brown coal.

With its vast fields, relatively low prices, as well as cheap and widely available coal-combustion technology for generating electricity and heat, coal accounted for an impressive 98 percent of Poland’s 1990 energy mix. It has now fallen to 80 percent.

An energy pariah state of Europe

Conditions for Poland’s coal-based energy industry have, however, altered dramatically. First, this has taken place due to raising awareness for climate change, with human activity being primarily to blame. Accused of emitting vast amounts of CO2, coal-fired power stations have been put in the public pillory, as more and more are voicing strident criticism against the smoking chimneys of Poland’s biggest brown coal-fuelled power plant in Bełchatów, or a coal-fired heat power station in Warsaw’s northern district of Żerań.

What is linked to this is a EU’s ever-restrictive policy that stipulates for the introduction of a carbon tax. In recent years, prices of CO2 emissions have skyrocketed, from $7 per tonne in October 2017 to an exorbitant $30 per tonne in August 2019. Experts are unanimous in the view that further price boosts are to be expected.

Last but not least, the golden era of Poland’s coal is in decline. From being one of the top coal exporters during the time of the Polish People’s Republic, Poland has now become its net importer. Added to this are thorny political factors as most of the purchased raw material coming from Russia.

Poland’s successive governments have, for their part, made failed attempts to restructure the country’s mining sector in a bid to boost its efficiency. In the course of the last 30 years, state-owned companies have changed their names while being handed over to a number of various entities. But their work efficiency is increasing at snail’s pace, and is sometimes even doomed to decline.

Owing to these factors, in May 2017, electricity prices began to grow sharply at the Warsaw-based Polish Power Exchange. Electricity production costs as of coal units boosted from 150 PLN/MWh to a whopping 250 PLN/MWh over one year. Ultimately, electricity distribution companies have even announced the increase in energy prices for residential customers and businesses by several dozen percent.

Their declaration coincided with the campaigns ahead of Poland’s local elections and the European Parliament voting. To put in bluntly, the topic got a political momentum. The energy industry has, for the first time in many years, entered casual conversations of many Poles while featuring on the front pages of the political agendas of many parties.

Poland’s present-day debate on energy issues varies from what took place some two years ago. Each political party to run in the October 13 general election has in its agenda a plan for upgrading the domestic energy sector, and both climate change and sources of electricity became a number one topic in the mainstream media. Poland does not differ much in this respect from its German and American peers.

Unfortunately, with politics comes the increased temptation to spread populism. And this also affected the United States, where Bernie Sanders submitted his Green New Deal proposal, calling for converting the U.S. economy to 100 percent renewable energy sources (RES) by 2030.

In May 2019, a similar plan, albeit this time on Polish soil, was pushed forward by a Civic Platform politician Michał Boni. And he was not the only one to advocate for such a solution, as evidenced by Robert Biedroń’s leftwing Spring party that wants to see Poland’s economy wholly dependent on renewable energy by 2035.

At first glance, these plans seem reasonable. So, after all, what is wrong about generating 100 percent of energy from renewable sources while abandoning coal and fossil-based electricity? But this is just impossible.

While coal-fired and nuclear power plants are capable of operating without renewables, neither wind nor photovoltaic power facilities can ensure the stability of its power system without what is called baseload generation. It is a type of power generation referred to as both stable and entirely reliant on human will. This category includes coal, gas, oil, and nuclear units.

What stands out as an excellent example of mutual interdependences is the Lithuanian experience. Following the decision to phase out its nuclear power program, two phenomena emerged in the country. It saw both a dramatic increase in electricity imports and a growth in natural gas and oil imports to satisfy the needs of the power plant. Naturally, Lithuania has begun lively efforts to develop renewable energy and is planning to build a new nuclear power facility to ensure the stability of the RES-saturated system while not letting emissions go higher due to more extensive use of conventional power plants.

Let’s look at the example of Germany. When progressively quitting nuclear solutions, Europe’s energy transformation leader found out that it is impossible to give up coal-based electricity. In consequence, Germany holds the lead in consuming brown coal, seen as least green-friendly. Surprisingly, to deal with this issue, an alternative to a baseload in the form of natural gas is being envisaged, a raw material seen as less emissive than coal yet much more than nuclear energy. For this reason, among others, Berlin is making efforts to maintain cordial ties with Moscow while currently being in the process of constructing the Nord Stream 2 energy trunkline.
Renewable energy sources are non-dispatchable, which is their highly undesirable feature. No one is capable of letting the wind blow or making the sun shine. Though their variability is likely to be foreseen, electricity will need to come from elsewhere. Relying upon renewable energy sources exposes the power system to constant intermittencies in electricity generation and the mounting risk of blackouts, or massive power outages.

An energy storage technology is, however, not developed fully enough to allow for stabilizing the system, in a neither effective nor cheap manner. A constant increase in its prices stems from the growing demand for lithium-ion batteries, along with diminished output and mining capacities, as lithium is a pretty rare earth metal.

In a bid to stabilize the power system, thermal power plants, including nuclear facilities, need to be built. Combining nuclear and renewables, or the single constellation of the electricity mix, ensures the energy system’s stability while achieving net zero CO2 emissions.

For this reason, a declaration of Polish policy-makers to build as many as six nuclear reactors by 2040, a solution foreseen to run in parallel to developing renewable energy sources (solar and offshore wind farms), should be welcomed enthusiastically. And let’s not forget that Poland has very little time left to take real actions to construct such facilities.

Though the nuclear option has been on the table in Poland since the 1980s, we are still on the early path to building the first facility of this kind. Poland is in most advanced talks with U.S. representatives, though these negotiations refer chiefly to a memorandum of understanding on cooperation in civilian use of nuclear energy, signed on June 12 by U.S. Secretary of Energy Rick Perry and Poland’s government official responsible for strategic energy infrastructure Piotr Naimski.

But there is still no financing plan for such a serious and costly venture. There is evidence to suggest that the Polish authorities have finally grasped the issue seriously, and, at least according to what Mr. Naimski has declared, Poland’s first nuclear reactor is set to become operational in 2033. Launching the pioneer nuclear bloc is theoretically likely to take place on this date, but the time grows shorter every single day. This is especially that – if deprived of similar investments – Poland may encounter severe problems with satisfying its economy’s mounting energy needs.

Poland-U.S. partnership may serve a leading role in implementing the former’s nuclear ambitions. There are several arguments in favor of opting for the United States to help push through the investment, among which are friendly cooperation between the two countries, fuel supply stability guaranteed by a Sweden-based factory Westinghouse Electric Company, or the safety of U.S. reactors.

What needs to surface up is a blatant political will and Washington’s interest to enter the game. Let’s hope that none of these elements are omitted in the years that follow.

Author:
Maciej Zaniewicz – an editor of Energetyka24.com, Poland’s largest website that focuses on the energy sector.

The text originally appeared in the “Polish Daily News”