On August 18-19, Prime Minister of Israel Benjamin Netanyahu paid a two-day visit to Kyiv. This has been the first state visit of the head of government of the Jewish State to Ukraine in over 20 years. Aside from the fact that at present the bilateral relations between the two countries are very good, the trip was of great importance for Netanyahu especially in the context of Israeli domestic politics. To be more precise, parliamentary elections will be held soon in Israel – therefore, one of the main priorities of the Likud’s leader in his election campaign is to obtain the largest possible number of votes of immigrants from the former Soviet Union and, as a result, to weaken his main political rival, Avigdor Lieberman, in the fight for the same electorate. 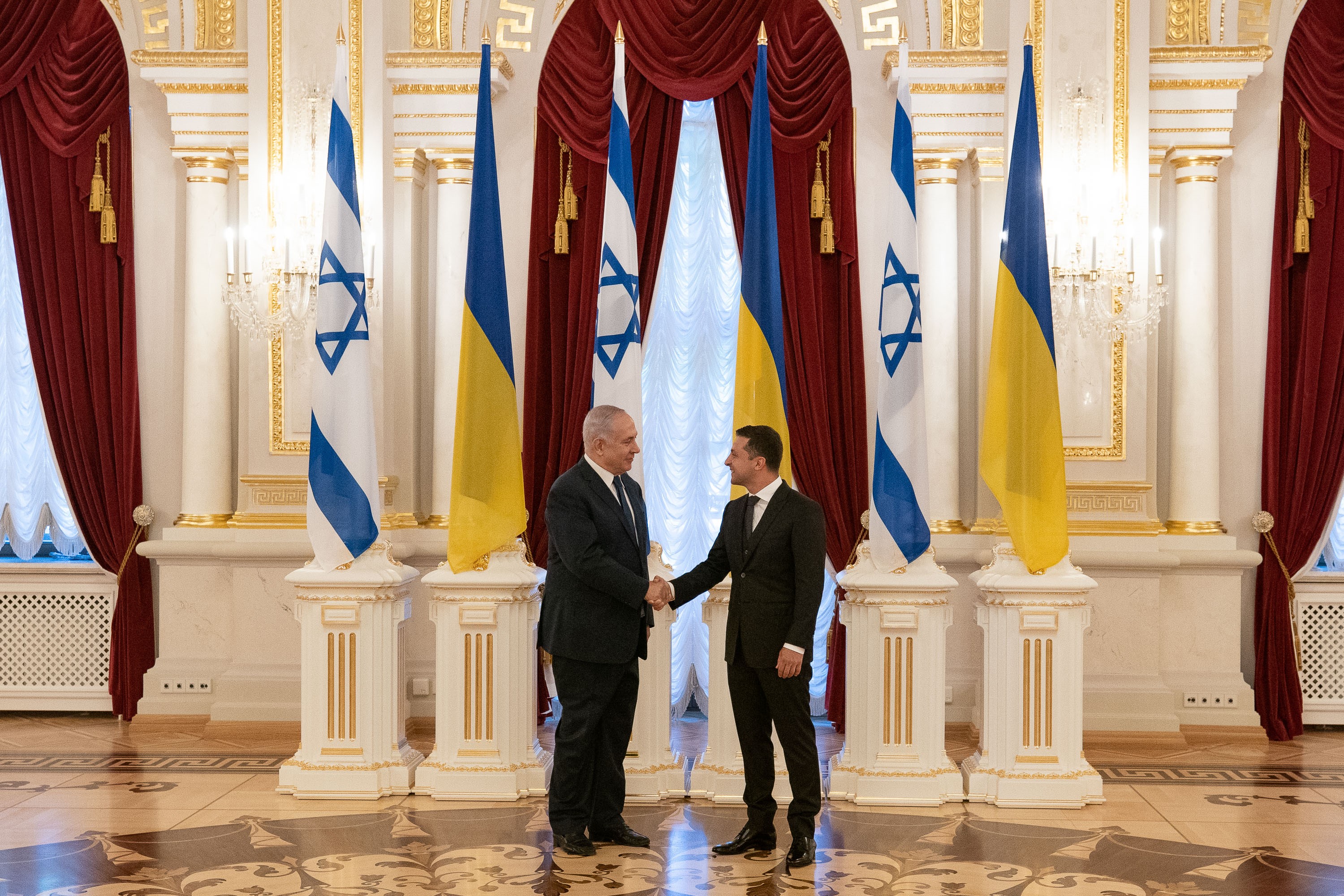 Israel’s Prime Minister Benjamin Netanyahu met with Ukraine’s President Volodymyr Zelensky and Prime Minister Volodymyr Groysman in Kyiv. The media in both countries were quick to point out that the two Ukrainian politicians are of Jewish descent. On August 19, the guest from Israel talked with Zelensky at the Mariyinsky Palace and, after that, a series of bilateral agreements were signed. After delivering official speeches, Zelensky and Netanyahu visited the Babi Yar memorial, where the Germans murdered over 33,000 Jews in 1941. Until the area was seized by the Red Army, the Germans had murdered here in total about 100,000 people, including, apart from Jews, Soviet prisoners of war, Ukrainian nationalists and the Romani people. Netanyahu also paid tribute to the victims of the Holodomor (the Great Famine) in the early 1930s, a mass genocide directly ordered by Joseph Stalin that resulted in the death of millions of Ukrainians in the then Soviet part of Ukraine. Kyiv has in the past called on Israel to recognise the Great Famine as an act of genocide. The talks held in Kyiv concerned a free trade zone, pension agreement and other bilateral issues. The Ukrainian government basically agreed to pay pensions to Ukrainian Jews who emigrated to Israel after 1991. The decision has yet to be approved by the Verkhovna Rada (Ukraine’s parliament). The case concerns about 8,000 pensioners living in Israel. As for the free trade agreement (it abolishes import duties on almost 80% of Israeli industrial goods and on 70% of Ukrainian industrial goods), it has already been ratified by the Verkhovna Rada. The Knesset (Israel’s parliament) still has not done that. In 2018, the trade exchange between the two countries amounted to 1.34 billion dollars. Zelensky stressed that in certain aspects (security) Israel can serve as an example for Ukraine, which is currently embroiled in the conflict in the Donbass region. After talking with Netanyahu, the Ukrainian president stated that Israel is Ukraine’s main economic partner in the Middle East and encouraged Israeli entrepreneurs to invest in the area over the Dnieper River.

On September 17, early parliamentary elections will be held in Israel. Netanyahu’s visit to Ukraine was part of his pre-election strategy. The goal is to obtain as many votes as possible among the electorate that emigrated from the former Soviet Union. At present, there are over one million immigrants from the former Soviet Union living in Israel. It is almost one-fifth of the population. The Likud Party has been trying to win over this electorate for a few months now. The group is mostly made up of immigrants from Russia, hence, very warm relations between Netanyahu and Vladimir Putin come as no surprise. However, one should not forget that after 1990 over 200,000 Ukrainian Jews emigrated to Israel. Already in January, during the signing of the free trade agreement, Netanyahu highlighted the “strong” relations between the two countries. He also said that while the Ukrainian Jews have quickly become a significant part of Israel’s population, Ukraine is still considered home by the large Jewish community. Taking the opportunity of Netanyahu’s visit to Kyiv, the Israeli press pointed out that Ukraine belongs to a group of European countries that support Israel at the United Nations. Therefore, Netanyahu will most certainly use the August visit to Kyiv in his election campaign, putting a special emphasis on the very good relations with Ukraine.