According to press reports, on Thursday, August 6, 2020, a telephone conversation was to take place between the US Secretary of Defense – Mark Esper and the Minister of National Defense of the People’s Republic of China – Wei Fenghe. The conversation was to concern Taiwan and the South China Sea, among others. 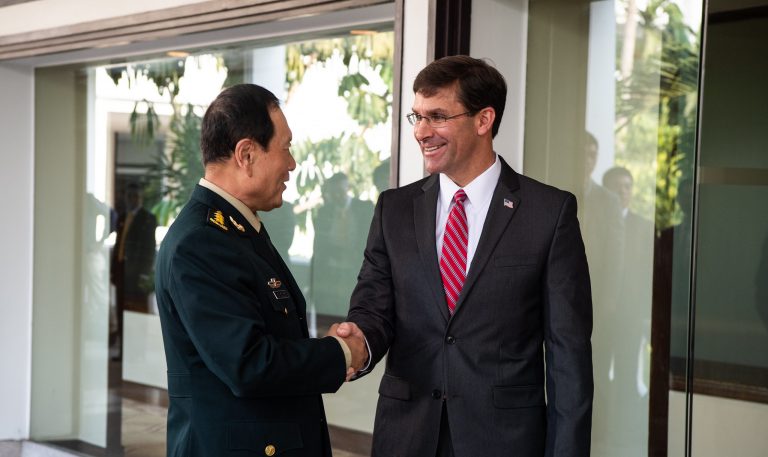 On Thursday, August 6, 2020, US Secretary of Defense – Mark Esper, and Minister of National Defense of the People’s Republic of China (PRC) – Wei Fenghe, had a telephone conversation. According to the Chinese side, the conversation was to take place at the request of the Americans, but the Pentagon did not confirm this information. The exchange of opinions was to last 90 minutes. Both interlocutors warned against the escalation of tensions in Taiwan and the South China Sea.

According to a memo from the US Department of Defense, Esper called for Beijing’s greater transparency on the COVID-19, expressed concerns about the destabilizing activities of the PRC in the areas of Taiwan and the South China Sea in addition to urging the PRC to respect its international obligations under the principles of the 1984 Sino-British Joint Declaration on Hong Kong. He recalled it is crucial that China complies with international law, standards and principles.

What is important for the conversation, Esper underlined his priorities in US-China defense relations, focusing on crises prevention and their management, mitigating risks as well as cooperating where interests of the two nations align.

The Chinese Xinhua News Agency also confirmed that there was a discussion on Taiwan and the South China Sea. Wei warned Esper of “dangerous moves” that would lead to an escalation of bilateral tensions. Moreover, he presented Beijing’s position on the “stigmatization” of China by America, asking the US to: “stop its erroneous rhetoric and deeds,” strengthen the management and control of risks in maritime areas, avoid hazardous actions that could exacerbate the situation as well as to maintain peace and stability in the region.

The conversation took place at the time of the next round of the “Cold War.” Recent events include the American ban on the use of Chinese TikTok and WeChat applications, revoking Hong Kong’s status as a separate part of China, diplomatic exhortations on violations of human rights, religious freedom and legal issues around the South China Sea; as well as the approval of the sale of MQ-9 SeaGuardian drones to Taiwan. Furthermore, according to the Chinese think-tank – The South China Sea Strategic Situation Probing Initiative (SCSPI), 67 US reconnaissance planes have patrolled the South China Sea in the last month, which is twice as much as in May. According to the same institution, on Wednesday evening of August 5, the E-8 Joint STARS battlefield reconnaissance and command plane were spotted 110 kilometers away from the coastline of Guangdong Province, which means that for the first time in recent months an American spy plane approached the Chinese coast at night. The Chinese side is likewise conducting military activities on its own and disputed seas every now and then.

The need for new communication procedures in case of sudden, serious escalations on the Washington-Beijing line has been discussed for a long time. In July 2020, Esper informed about his possible visit to China in order to develop such a procedure. So far, the Pentagon spokesperson – Jonathan Hoffman, has not confirmed the date of the potential visit. The Chinese Global Times has also outlined a vision of possible serious disputes, where a new way of communication between the two powers is and will be necessary. It should be expected that the dispute is going to not end as Donald Trump will try to present himself as a tough leader prior to the US presidential election and the best target for attacks is China being the main competitor for world domination. The Chinese side will likewise not move towards consensus, as evidenced by the promoted and ongoing “wolf-warrior diplomacy,” which is prioritizing tenacity and strong adherence to the CPC’s uncompromising rhetoric.