On June 11, President Xi Jinping and The President of Belarus – Alexander Lukashenko, held a telephone conversation. The discussion concerned the deepening of future economic cooperation, especially within the framework of the Belt and Road Initiative (BRI). 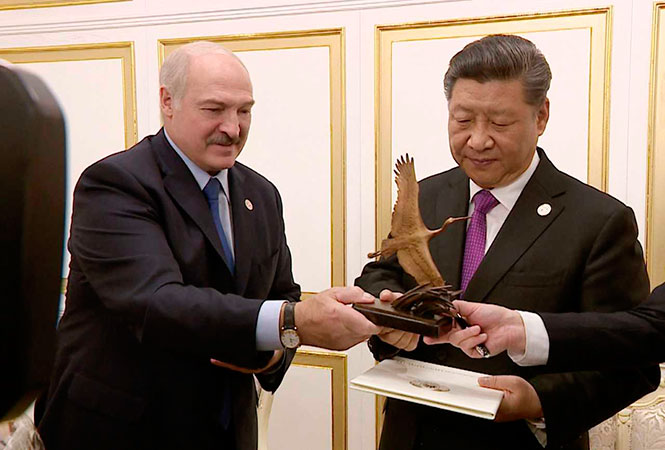 Xi Jinping recalled the mutual assistance during the coronavirus pandemic and ensured that sharing experiences in terms of control and prevention of the disease will be continued. He thanked Belarus for helping Chinese citizens who study, work and live in this country. According to Xi Jinping, the China-Belarus relations have solid foundations and a great potential for cooperation. Furthermore, he underlined that he would support Belarusian exports to China, especially food products, such as: dairy, beef and poultry meat. Xi Jinping explicitly encouraged Belarus to submit a request regarding this case to the relevant authorities of the People’s Republic of China (PRC) and promised that it will be processed as soon as possible.

According to the Chinese sources, Alexander Lukashenko admitted that both countries are friends and brothers thus thanking for help in the fight with the virus. Moreover, the President of Belarus announced that he strongly opposes the politicization of the pandemic and declared his support for Beijing in this matter. He added that Belarus is ready for enhanced cooperation with the Middle Kingdom by fully utilizing the China-Europe freight trains. The activity will contribute to the expansion of bilateral trade and joint construction of the BRI. The subject of the China-Belarus Great Stone Industrial Park was also discussed. Both of the interlocutors are interested in expanding this project. The conversation did not lack the diplomatic matters, i.e. the substitution of the Belarusian Ambassador to China, since the current Ambassador – Nikolai Snopkov, will be the Deputy Prime Minister. A. Lukashenko declared that he would delegate someone “of similar weight” to the diplomatic post in the Middle Kingdom. The President of Belarus ended the conversation by inviting Xi Jinping to Minsk, counting on the earliest possible time of visit.

Because of Russia’s imperialist attempts, the Belarusian authorities are searching for allies and stabilizers of the economy. China may be the solution of their problems. It seems that both countries can benefit from this. First of all, China needs Belarus as a transit country on the main land route axis of the BRI project. Secondly, it can be a leverage in Moscow-Beijing relations. Thirdly, the Middle Kingdom’s investments in Belarus can show the member countries of the 17+1 format that it is worth cooperating with China to achieve mutual benefits.

Such cooperation may allow for the economic development of Belarus. The Great Stone Industrial Park, the construction of a high-speed railway lines, a car factory or another metro line are few of planned or already being implemented Chinese investments. It is also worth recalling that in December 2019, Beijing supported Minsk with a loan of half a billion dollars, at the exact time of negotiations with Moscow on the “integration” of Belarus and Russia, in a way temporarily saving Lukashenko in a problematic situation. Of course, it has its price. China has already become the second largest lender of Minsk after Russia. From the Polish perspective, it is worth that we observe the changes taking place at our eastern neighbor’s more closely. China’s entry into this area will certainly not facilitate Belarus’ transition towards the Western standards.