Grzegorz Kuczyński on the arrest of Alexei Navalny

On Tuesday, 19th January 2021, the Warsaw Institute think tank interviewed Grzegorz Kuczyński, director of the Eurasia program and an expert on Russian politics. The conversation was devoted to the arrest of a Russian oppositionist, Alexei Navalny, who, after an unsuccessful attempt on his life and subsequent treatment in Berlin, decided to return to Moscow, aware of the inevitable repression of the Kremlin. 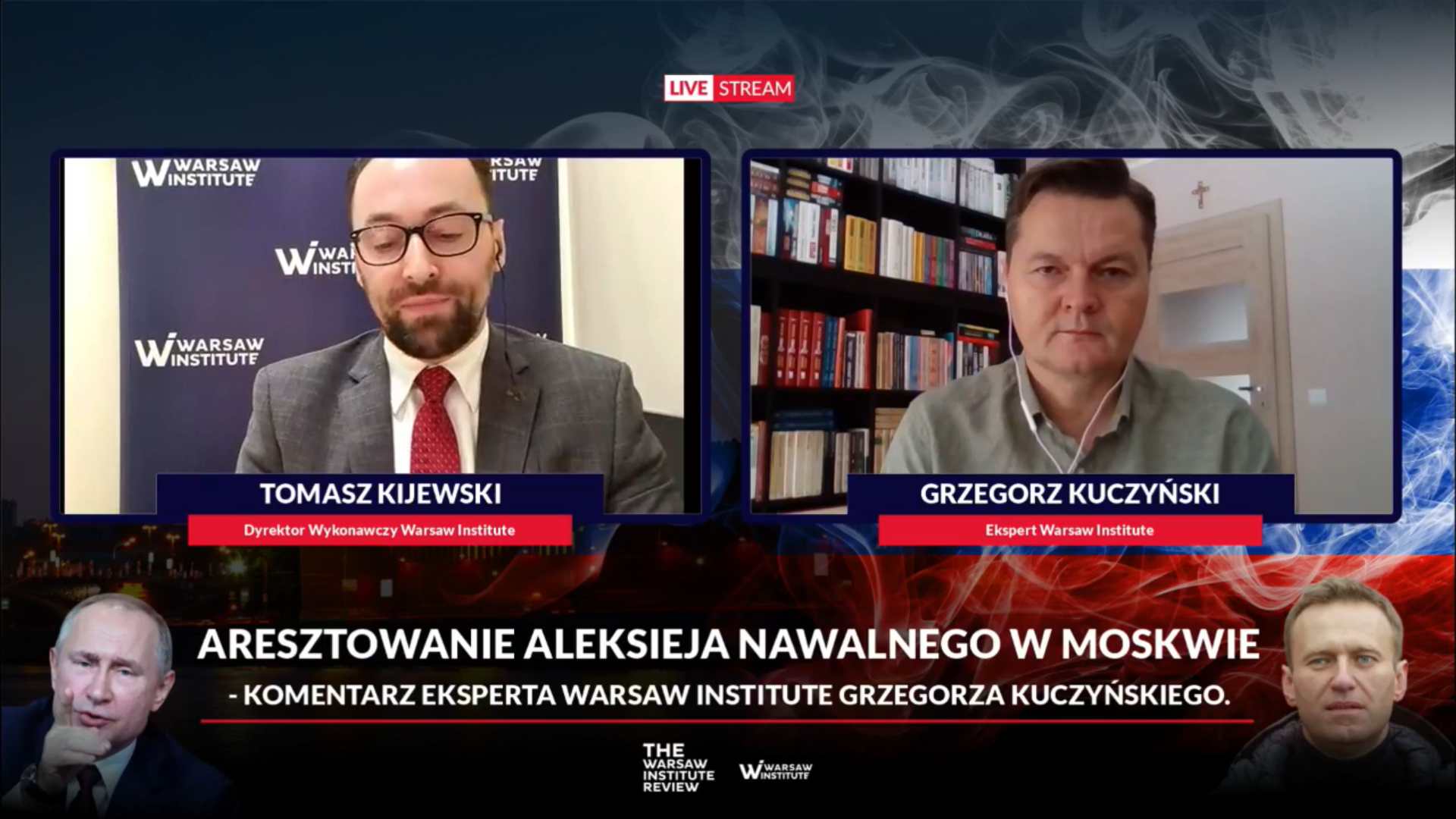 The meeting began with an introduction by the moderator – Tomasz Kijewski, Executive Director of the Warsaw Institute. Then, Mr. Kuczyński summarized the history of Navalny’s political activity. He emphasized that the Russian politician owed his current position as the leader of the opposition to new technologies that allowed him to reach a wide international audience and journalist agencies. His initial political activity was focused on revealing corruption scandals involving representatives of the Kremlin. Navalny took advantage of the growing audience in the digital world and turned it into real political activity by “reaching out to people” – organizing rallies, meetings with foreign journalists and cooperating with international investigation agencies. Therefore, he is a true “politician of the 21st century” – he used his reach in social media to build a fully-fledged opposition movement. Interestingly, a few years after his first strictly political presence, Navalny showed a significant fascination with nationalism. Although this tendency subsided just as quickly, the politician is still leaning towards the far right, denouncing the Western model of democracy – contrary to popular media belief.

The expert emphasized that for Navalny, returning to Moscow was the most sensible option. Had he remained in exile, he would have shared the fate of Kasparov or Khodorkovsky, exposing himself to accusations of being a “puppet of the West” or a “coward”. Although the opposition’s return to the oppressor’s house may seem downright irrational, it may actually turn out to be the safest way out of his circumstances. In the event of any harm suffered on the territory of the motherland, especially when serving a sentence in prison or under constant, now-official observation of the security services, it would be difficult for the Russian authorities to renounce responsibility. An alternative strategy adopted by Navalny may be to serve a sentence in prison to perpetuate his “legend.” Regardless of the tactic he decided to take when leaving Berlin, it should not be assumed that it is ill-considered, because the Russian services, even before announcing his return, publicly announced that they would seek to imprison Navalny on his return to Moscow.

When asked about the likelihood of a repetition of the Belarusian scenario, Mr. Kuczyński pointed out that the Kremlin has long disregarded the opinion of the West – Putin will therefore be determined to take any measures necessary to maintain the stability of the regime. The current priority in this regard is the neutralization of Navalny, which is achieved, among others, by December’s “muzzle laws,” which not only allow the relatively simple suppression of protests, but also make the repression of “enemies of the nation” “more legal.” It should be emphasized that for centuries Russia has been skillfully manipulating the law in order to achieve its policy goals – this is part of its hybrid operations scheme. Although Putin had the opportunity to learn his lessons from the events in Belarus, he probably will not have to test his knowledge in practice. Right after Navalny’s arrest, the oppositionist called for people to take the streets. This announcement, however, did not meet the expected response, as the Russian community remained at home. The realities of the pandemic are definitely unfavorable for the activist. The expert also emphasized that the president of Russia does not enjoy as much support among the nation as before. Therefore, it can be expected that the upcoming parliamentary elections will be rigged. According to G. Kuczyński, only these factors are associated with a greater risk of an increased opposition movement, but the existing regulations facilitating the suppression of resistance and the repression of oppositionists will definitely help Putin maintain the stability of his regime.

The circumstances of Navalny’s poisoning are already inseparable from the issue of the Nord Stream 2 energy project. The sanctions imposed on the constructors and Russia have significantly limited the pace of development not only of the project itself, but of the country’s entire energy expansion. This has clearly influenced the exploitation of the Arctic areas by the Russians, as they are unable to achieve it without access to Western technologies and know-how. As for the gas pipeline itself, one should not expect a reduced involvement of Germany, as it did not happen even after the emergence of hard evidence for the FSB’s participation in the poisoning Navalny. It should be noted that now Berlin is more interested in completing the project than Moscow, as the Kremlin has already achieved its goal, and millions of dollars from the federal budget have already been transferred to the accounts of private companies managed by oligarchs from Putin’s inner circle.

To answer a question from the audience regarding the speculations about the hypothetical situation after Navalny took power, Mr. Kuczyński expressed the view that, under the rule of the current oppositionist, Russia could become a greater threat to the West. A thriving, modern economy, managed by a politician genuinely backed by the people, would be stronger internally, and Moscow’s key foreign policy priorities would probably not change. The expert pointed out that these theses may be intentionally reinforced by the Russian administration in order to turn the West against Navalny.