St. Petersburg: Progress in Relations between Gazprom and Germany

Talks between the leadership of Gazprom with heads of German gas companies constitute yet another sign that both parties aim to accelerate the implementation of their joint projects. An outright opposition of the USA and American allies in Europe and a threat with sanctions on European companies engaged in the Gazprom’s projects seem to complicate the Russian-German plans. But for now, there are no signs that Berlin would yield. Moreover, talks in St. Petersburg signalize the opposite. 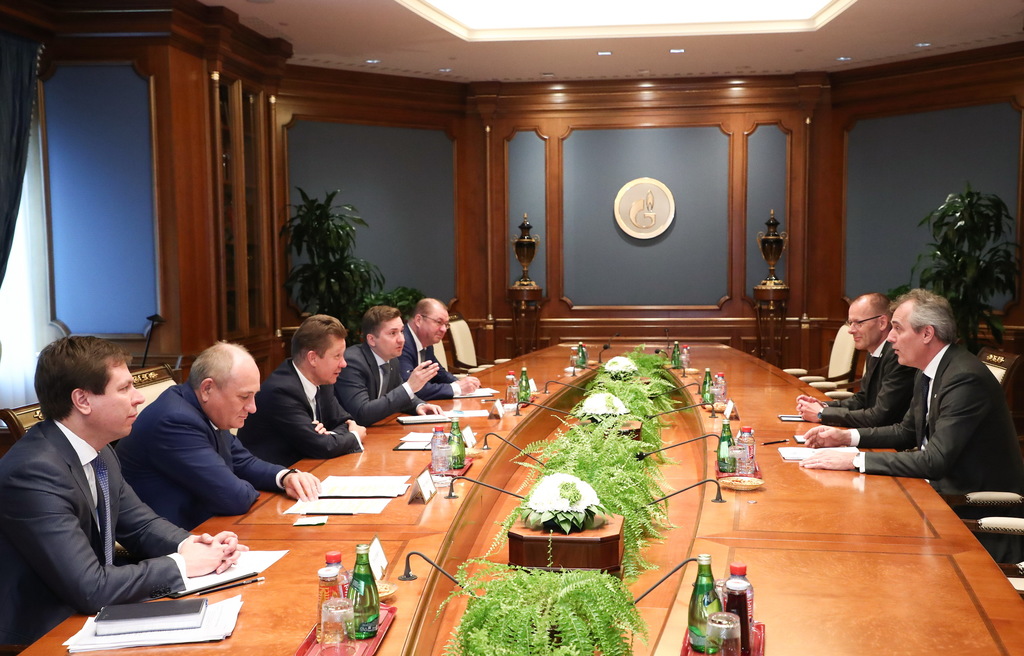 On May 24, a meeting between chiefs of Gazprom and head of two German gas companies took place at the St. Petersburg International Economic Forum. Firstly, CEO Alexey Miller conducted talks with Mario Meren, CEO of Wintershall Holding GmbH. They discussed current issues and prospects of the cooperation. Yet the most important topic was the implementation of Nord Stream 2 project. In this context, delegates of both companies exchanged views on the development of the German gas transport system for receivers in Germany and other European countries. Just after the meeting with Wintershall’s representatives, Miller met with a delegation from Verbundnetz Gas (VNG) and its CEO Ulf Heitmüller. This conversation touched the status of two joint projects: Jemgum and Katharina underground gas storages. The former has been launched in 2013 while the latter in 2017. Currently, they are being developed to reach their maximum capacity.

The information about the talks on the infrastructure, which allows to stock up and send as broadly and as much as possible of gas coming through the bed of the Baltic Sea to Germany, confirmed that Germans and Russians aimed to make Germany a gas hub, which would dominate the neighboring countries. As a result, Poland and other countries in the region would become double-dependant both on the source (Russia) and on the supplier (Germany). In fact, it will worsen the situation, as currently gas is being supplied directly from Russia.

In 2017 Gazprom supplied to Germany a record-breaking amount of gas: 53.4 billion cubic meters, which is 7.2 percent (3.6 billion cubic meters) more than in 2016. Shares of Wintershall Holding GmbH are totally held by BASF company and the company is Gazprom’s partner in the Nord Stream project (gas transport) and in extraction projects in Yuzhno-Russkoye field and Urengoyskoye field. VNG AG is a part of VNG Group that consists of over 60 companies connected with gas extraction, production, transport, storage and trading all around Europe. In the Katharina UGS project, VNG and Gazprom have half of the shares each. Plans expect that the maximum capacity of storages will be achieved in 2025 when 12 caverns will be able to store 650 million cubic meters. Jemgum USG project is a joint venture of Gazprom, VNG, and Wingas. In years 2019-2020, it is expected to reach the capacity of 900-950 million cubic meters.

In 2017, export of Russian gas to the EU has risen by 8.4 percent (year by year) and reached 194.4 billion cubic meters, and Gazprom’s share in the EU market has risen from 33.1 percent to 34.7 percent. After the start of Nord Stream 2, Russia will be able to supply 110 billion cubic meters of gas a year (including the Nord Stream working since 2012) to Europe. Germans are the biggest Russian gas buyers. Wintershall and PEGI/E.ON are held by five shareholders of Nord Stream (15.5 percent of shares each). Also two German companies – Wintershall and Uniper, signed in April 2017 an agreement on financing 50 percent of the Nord Stream 2 project (every company is expected to provide 950 million euro