Scheduled for August 21, a working visit by Venezuela’s Vice President Delcy Rodriguez to Moscow is yet another sign of ever-tightening cooperation between Russia and Venezuela. Only a few days before, Venezuelan Defense Minister Vladimir Padrino had made a trip to the Russian capital. A bulk of further agreements are being inked, also in relation to Russian-Venezuelan military partnership, while Moscow keeps sending economic support to Maduro’s regime. The Kremlin has no intention to step back from Venezuela; the harder Washington pushes, the higher is Moscow’s resistance. Vladimir Putin is aware that the demise of Venezuela’s Chavist regime would be a significant failure for Russian geopolitics. So he will send support to the Caracas government as long as possible. And if he has to withdraw one day, he will surely ask for a high price to be paid. This should explain the growth in Moscow’s involvement on Venezuelan soil. 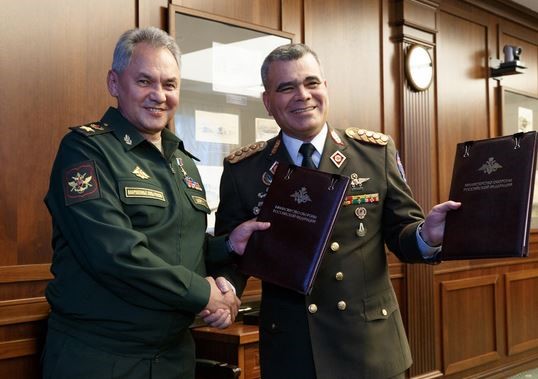 Venezuelan Vice President Delcy Rodriguez arrived in Moscow on August 21, where she was received by Russian Foreign Minister Sergey Lavrov. The central topics at the meeting were joint projects in the areas of the economy, advanced technologies, and culture. However, the talks were largely devoted to questions connected to cooperation between the two countries on the global stage. On August 15, Russia and Venezuela signed an agreement governing visits by the countries’ warships to each other’s ports.
This coincided with Padrino’s visit to Moscow. A landmark deal allowing the Russian navy to extend its operational capabilities south of the Caribbean Sea was sealed a week after Nicolas Maduro had announced at a rally in downtown Caracas that Venezuela stood ready to resist the U.S. “imperialist blockade.” Earlier a spokeswoman for Russian Foreign Ministry Maria Zakharova had accused the United Kingdom of building a military facility in neighboring Guyana, intended as a starting point for sabotage groups.

Also, Russia has been a bulwark of economic support for Maduro’s regime, with deliveries of both gasoline and other petroleum products aimed at preventing the domestic oil industry from collapsing. In June and July, Venezuela received at least 600,000 barrels of Russian-sourced fuel and a feedstock to produce gasoline, Bloomberg agency has reported. The cargoes sailed from the Black Sea port of Taman to Malta, where they were transferred to other vessels heading to Venezuela. The regime in Caracas has much suffered from a massive fuel shortage because of U.S. sanctions. Earlier large amounts of its fuel were imported from U.S.-based refineries remaining in the hands of a subsidiary of Venezuela’s state-controlled PDVSA oil monopoly.

Russia’s policy in Venezuela seeks to permanently destabilize this world region close to the United States. Also, it is about weakening Washington’s positions while building up Moscow’s military influence in the Caribbean region.
Attention should be paid to yet another motive behind Russian strategy as offering support for Maduro goes in line with Putin’s struggle against “color revolutions.” An example of the latter are all actions undertaken by Venezuela’s opposition parties, seen by the Kremlin as targeted at its friendly regime. But there are more obvious reasons. The oil-rich country owes Russia a total of $17 billion while Russia’s military intelligence service GRU de fact control drug trafficking from Colombia via Venezuela. After the demise of the INF treaty, there has arisen a new, albeit potentially dangerous burning issue between Moscow and Washington. For his part, Russian Deputy Foreign Minister Sergei Ryabkov said that Russia would consider deploying its missile forces close to the United States if analogous U.S.-made rockets were fielded in Europe. What is taking place now may somewhat resemble the Cuban crisis of the 1960s.