The economy of the PRC after six months of the pandemic

The spread of the COVID-19 pandemic led to the collapse of the favorable developmental dynamic in China and a recession of 6.8% in the first quarter of 2020. The Chinese parliament, whose sitting took place between May 24th and 28th, did not adopt an unambiguously defined GDP target, but the taken measures indicate that Beijing still assumes a possibility of growth within the 2-3.5% range. This indicator would stabilize the unemployment rate below 6% (a real rate at around 10%, although in some regions it may be as high as 20%) and would be a PR success against the pessimistic forecasts of the IMF for the Eurozone (-7.5%), the USA (-5.9%) and Japan (-5.2%). This optimistic scenario does not take into account the possible resurgence of COVID-19 cases, i.e. the so-called second wave and the reintroduction of drastic restrictions, which could lead to a recession not solely on a quarterly, but on a yearly basis. Uncertainties related to the epidemic situation in the country and the condition of developed countries’ markets suggest that the growth trajectory will resemble letter “W” rather than “V”. 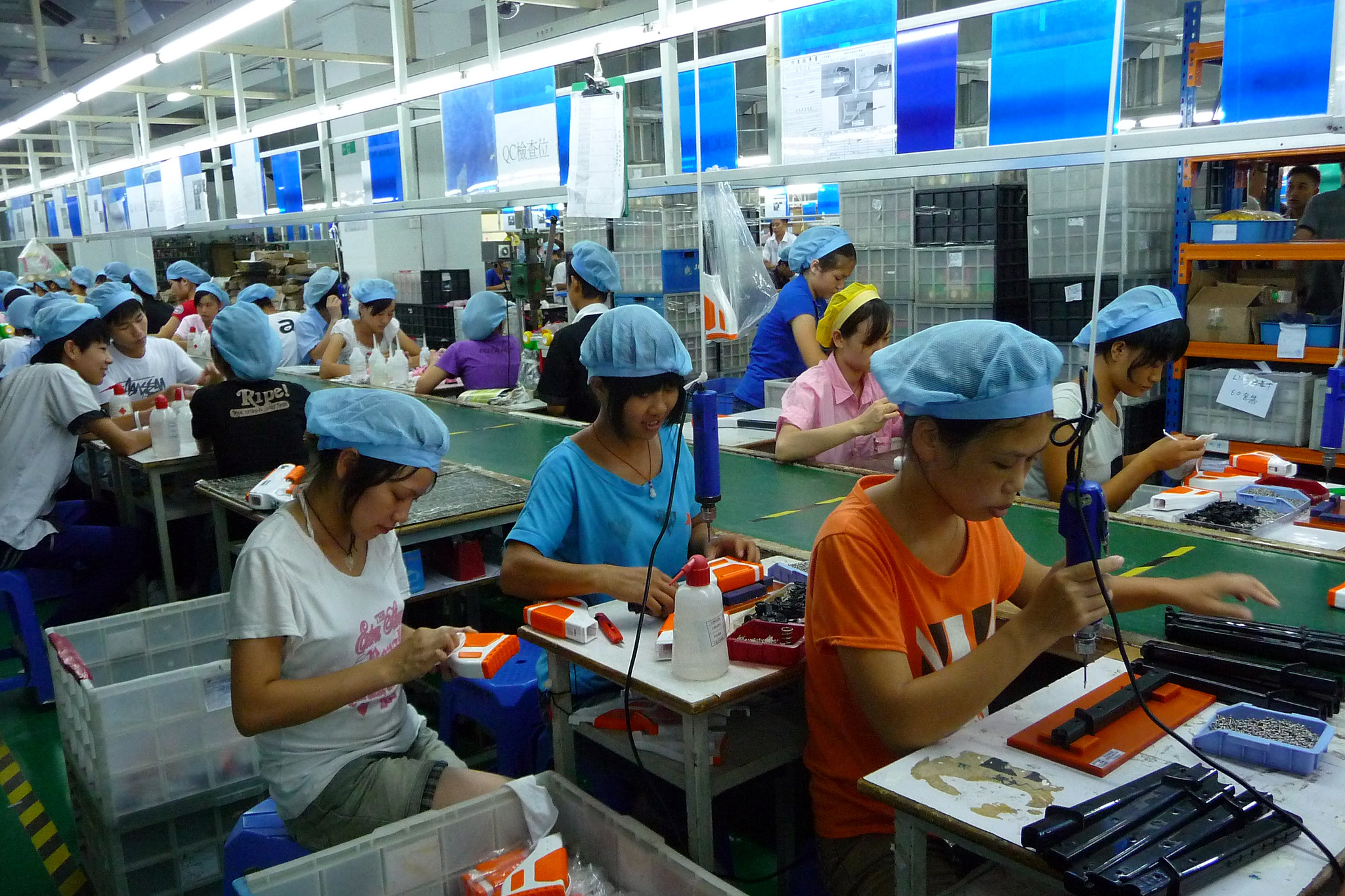 On January 23, the central authorities decided to lock down the city of Wuhan and the Hubei province as well as to introduce exceptional security measures on the whole territory of China. As a result, operations of major production facilities have come to standstill, production chains have been disrupted and citizens’ activity has been drastically restricted. It then became clear that in the first quarter of 2020 China will be affected by the recession, although dynamic developments have made it problematic to determine the scale of the crisis. In the first week of March, the authorities published data for January and February which confirmed the pessimistic forecasts made by the economists. In February, the PMI index, reflecting financial activity of managers, fell to 35.7 – the lowest level in the history of statistics. The scale of the crisis is shown by the fact that at the most difficult moment of the 2008 financial crisis, the PMI dropped to 38.8 – three points more than the February’s index. Industrial production at -13.5%, retail sales at -20.5% and investments in fixed assets at -24.5% year-on-year were also heavily affected in the first two months. Furthermore, the difficult economic situation resulted in a 17.2% decrease in exports and a 4% decrease in imports year-on-year. Further development of the COVID-19 disease was a threat not only to an upsurge in the number of victims, but also to a viable collapse of the Chinese economy thus undermining the legitimacy of the CPC.

March brought a relative stabilization of the epidemic situation in the PRC and a symbolic visit of President Xi Jinping to the city of Wuhan to herald a return to social and economic normality. Unlike China, for many developed economies this was the beginning of the most difficult stage of the pandemic, with the highest growth of COVID-19 cases (1 million new cases in the USA, for instance). These countries were forced to introduce solutions similar to those applied by Beijing in January. This has led China to being cut off from the key markets and to the collapse of consumption in global markets. Thanks to Beijing’s conscious policy, the share of exports in China’s GDP has been steadily declining since 2006 and is now at around 17.4%, more than twice as less as in 2006 (36.04%). Although the role of foreign trade has been limited, it still plays an important role for the Chinese industrial sector – increasing the global demand is a vital condition for achieving a full normalization.

The gradual restoration of functionality among factories and service sector allowed for the improvement of the economic situation. The first signs of an economic awakening became apparent as the PMI index rose to 52 points in March. This distinct improvement was mainly due to new domestic orders, pressure from the CPC and low prices of imported goods. Other indexes also increased, although the economic situation remained difficult. Industrial production decreased by 1.1%, investment in fixed assets by 16.1%, retail sales by 15.8% while exports and imports by 6.6% and 0.2% respectively year-on-year.

Favorable trends continued also in April: for the first time since the beginning of 2020 the industrial production increased by 3.9% y/y, retail sales dropped by 7.5% and fixed assets investments by 10.3% y/y. Although the last two indicators have experienced a decrease, they were much smaller than in the preceding month. Moreover, exports in April unexpectedly increased by 3.5% y/y, contrary to the forecasts by Reuters agency which assumed that they will drop by 11.2%.

One of the most unexpected changes in May was the increase in sales of passenger cars for the first time since 2019 (+1.9% y/y) and further growth of industrial production by 4.4%. An increase in investors’ activity also became noticeable, which resulted in a reduction of drops in fixed assets investments equal to -6.3% y/y (-10.3% in April). A similarly marked rebound was observed in retail sales: -2.8% compared to -7.5% a month earlier. Exports increased by 1.4% and imports fell by 12.7%, generating a trade surplus of RMB 442.75 billion.

Standard Chartered Bank predicts that the PRC’s economy will increase its value by 4% in the second quarter of 2020 and by the end of the year it may grow as high as 5.1%. A similar result is also expected by Nomura’s chief economist in China – Ting Lu. who points out that, taking 6.8% as a starting point, GDP growth of 4% in the second quarter will mean an actual rebound of 11 percentage points. BBVA Research presents more cautious estimates forecasting 2% GDP growth in the second quarter and 2.2% growth in the whole year. The International Monetary Fund has made the most pessimistic forecast for China, assuming that its economy will increase only by 1.2% in 2020 and strongly rebound in 2021 (9.2%).

The economy of the PRC is gradually returning to normality after extremely difficult six months, but a full normalization should not be expected until 2021 the earliest. China, weakened by the pandemic, faces a number of domestic and international challenges. The rising unemployment rate and the consumption aspirations of the broadly defined middle class are the priorities, as they have a potential to undermine the authority of the CPC. These matters are compounded by the issue of growing household debt (over 53% of GDP in 2018) and declining investment efficiency – Incremental Capital-Output Ratio (ICOR) is three times worse than in 2007. Internationally, economic relations with the USA and the possibility of further escalation of the trade war remain the main problems. Under the current circumstances, the fulfilment of Beijing’s commitments included in the Phase One trade deal seems unrealistic. In the January-February period, China purchased USD 30.6 billion worth of goods, significantly less than in 2019 (USD 33.63 billion), 2018 (USD 42.81 billion) and 2017 (USD 39.21 billion). To reach the import quotas comprised in the agreement, imports from the USA would need to reach approximately USD 55 billion in the first quarter of 2020.

The Beijing authorities will seek to limit the negative impacts of the pandemic by using a combination of infrastructure investments and fiscal instruments. The value of bonds issued by the state is expected to almost double in comparison to 2019 – from RMB 2.15 to 3.5-4 billion. Furthermore, during the NPC’s proceedings, Prime Minister Li Keqiang announced that the budget deficit will increase to 3.6% (2.8% in 2019), which will provide supplementary funds of about USD 506 billion. Conventionally, the core element of the stimulus package will be the infrastructure investments whose value in 2020 is expected to exceed USD 3.6 trillion. The authorities state that the focus will be on the efficiency and innovation of the projects, which is associated with a future increase of the funds allocated to the construction of digital infrastructure and innovative economy (5G, big data, industry 4.0, green energy, high-speed rail).