On Thursday 18 June 2020 the first expert debate in the #RODMonline series took place. The event, participated by Deputy Minister Szymon Szynkowski vel Sęk, Dr. Piotr Bajda, professor at Cardinal Stefan Wyszyński University in Warsaw and Vít Dostál, director of the AMO Research Center in Czechia, was organized by the Warsaw Institute think-tank and the editorial board of The Warsaw Institute Review in cooperation with the Ministry of Foreign Affairs and the Regional Center for International Debate in Cracow. 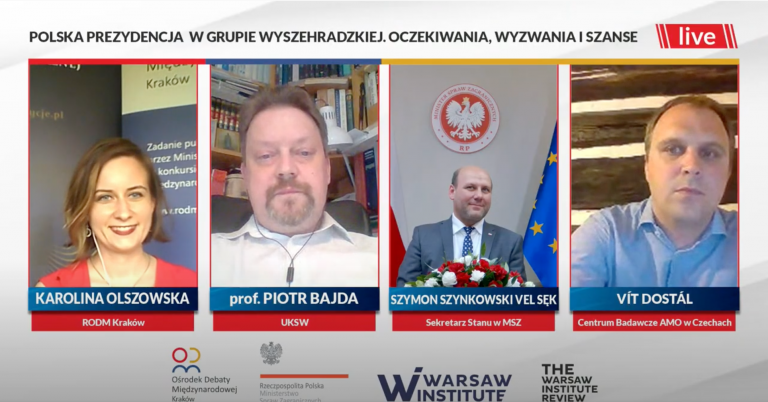 In July this year the Polish presidency of the Visegrad Group will begin. In this regard, experts that gathered in the debate talked about the expectations for the annual presidency, which starts in a difficult time related to the coronavirus pandemic in the world. Various topics were discussed regarding challenges that Poland will face when organizing individual events and celebrations of the 30th anniversary of establishing an agreement in the Hungarian Visegrad by Poland, Hungary, the Czechia and Slovakia, which gave rise to cooperation in V4 format.

During the meeting, Deputy Minister Szymon Szynkowski vel Sęk emphasized that the pandemic time brings new challenges. This happens both in the domestic dimension – in terms of safeguarding the health of citizens, as well as in the international dimension, because diplomacy becomes more virtual. The events related to the Polish presidency of the V4 will also go in this direction, at least partly.

The deputy minister pointed out that an important component of the Polish presidency will be the issue of artificial intelligence and the technological dimension, and that its climax will occur in February 2021. Professor Piotr Bajda emphasized that the area in which the Polish presidency will be able to mark its presence are people-to-people contacts that have been significantly reduced and tarnished by a pandemic. It is also possible to combine two dimensions of cooperation in many aspects – within the Three Seas Initiative and V4.

Vít Dostál from the AMO Research Center in Czechia summarized the expiring Czech presidency, pointing out that the Visegrad Group is a very important platform of cooperation, and under the Czech presidency we managed to improve its image and future prospects.

The meeting was led by Karolina Wanda Olszowska, the coordinator of the Regional Center for International Debate in Cracow.

The video of the entire meeting is available here:
YouTube Ministry of Foreign Affairs: https://youtu.be/bwncWkzYsdg

We invite you to listen to the debate!