Dark clouds over the WHO

As the SARS-COV-2 virus spreads, the World Health Organization (WHO) has been increasingly criticized because of its alleged support for the narrative constructed by the People’s Republic of China (PRC) authorities. On April 7, President Donald Trump described the Organization as “sinocentric” and on April 15 he announced that its funding was suspended. On May 8, the weekly Der Spiegel published materials from the Federal Intelligence Service (BND) which indicated that Xi Jinping, in a telephone conversation with WHO Director-General Tedros Ghebreyesus, demanded the publication of information about the possibility of transmitting the virus from person to person to be suspended. The WHO officially denied this information. 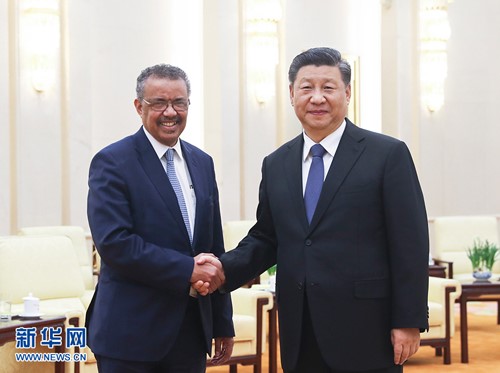 Since the end of January 2020, the Organization’s activities have met with accusations of bias, lack of transparency and inefficiency in combating the epidemic. The main reason for this was the positive response of the WHO authorities to the efforts undertaken by the Xi Jinping administration, even though the currently available sources indicate the process of systemic hiding of the epidemic in its initial stage. On January 28, during his visit to Beijing, Dr. Tedros Ghebreyesus declared “We appreciate the seriousness with which China is taking this outbreak, especially the commitment from top leadership, and the transparency they have demonstrated, including sharing data and genetic sequence of the virus.”

On December 31, 2019, Taiwanese authorities provided the World Health Organization with information on possible human-to-human transmission of coronavirus, receiving no official response. Simultaneously, until January 21, 2020, the WHO supported the stance of the Xi Jinping administration which claimed that the virus is not transmitted from person to person. At this point it should be noted that Taiwan is not an official member of the Organization due to the opposition of the PRC authorities, for whom the island remains a rebellious province without the right to participate in international life. Taiwan had an observer status from 2009 to 2016 as a result of the temporary détente in relations between Beijing and Taipei.

On April 15, President Trump announced that he was suspending funding for the WHO on the grounds that the Organization was not responding adequately to the spread of SARS-COV-2 virus. During the press conference, the US President stated: “The reality is that the WHO failed to adequately obtain, vet and share information in a timely and transparent fashion.” At the same time, the President declared that the United States, as the main sponsor of the WHO, must ensure that the Organization remains accountable for its actions.
The incident with Bruce Aylward, former Assistant Director-General of the WHO and Head of Mission to China, also negatively affected the perception of the Organization. During an interview conducted on March 29 by the RTHK’s Weekly journalist Yvonne Tong, B. Aylward first ignored the question about Taiwan, and when the journalist did not back down, he ended the conversation. The video clip depicting the incident reached millions of Internet users and contributed to the intensification of criticism of the WHO.

The initiative commenced on May 10, 2020, is a signal of growing tensions between the WHO and the US as well as their allies. Representatives of the US, Japan, the UK, Canada, Australia, Germany and New Zealand submitted a démarche in Geneva calling for an observer status for Taiwan. Should this demand be indeed met, it would be a blow to the image of the Beijing authorities which could further contribute to the deterioration of their relations with the Organization. Maintaining the status quo would make the accusations against the WHO that it supports the international narrative of the PRC credible.