China, Iran and global rivalry with the USA

At the turn of June and July 2020, the media were informed about the details of a 25-year agreement between China and Iran. It is expected to include plans to implement infrastructure investments worth about USD 400 billion, but these reports have still not been officially verified. If this information proves to be true, it will mean a significant strengthening of China’s position in the Middle East and a positive impulse for Iran’s crisis-ridden economy. The authorities in Tehran, along with China and Russia, are among the main opponents of the US domination over international politics, whilst the following years have a chance to bring about consolidation of the bloc. From Iran’s standpoint, increasing the scale of economic relations with China is a way to limit the effects of the crisis, but simultaneously it carries the risk of excessive dependence on Beijing’s aid. 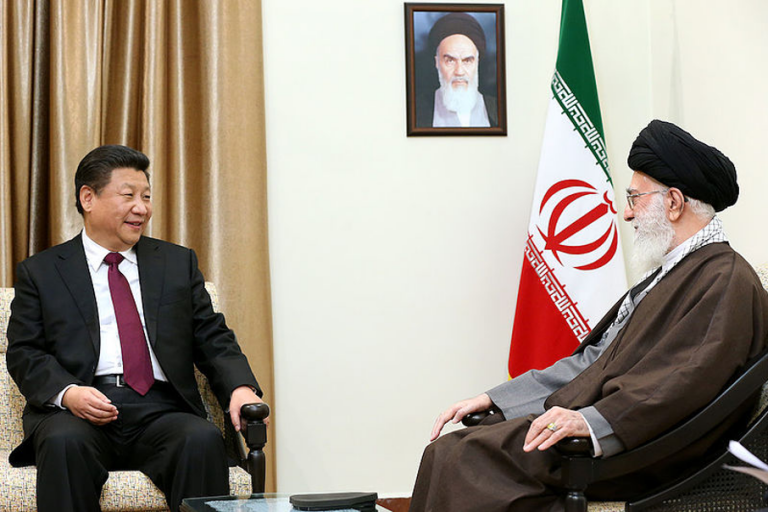 The plans to conclude the agreement were announced by Xi Jinping and Hassan Rouhani in January 2016. Since then, discussions between the two parties have continued and accelerated considerably since early 2020. Tehran’s desire to deepen economic and military cooperation with Beijing is a consequence of the economic and diplomatic isolation of the country, following the US withdrawal from the Nuclear Agreement (JCPOA) and the imposition of sanctions on the energy and financial sector in 2018. In the same year, the average level of Iranian oil exports to China equaled 650,000 b/d. As a result of the sanctions, the Chinese side started to gradually reduce its oil purchases – in the first half of 2019 imports fell to 400,000 b/d and when the abolition of exemptions for Chinese companies took place in May, the volume of imported oil decreased to 225,000 b/d. Negative trends continued in 2020 as well. According to Chinese GACC data, in the first five months of the year, trade with Iran decreased by 41% y/y and Iranian exports diminished by 62.2%. The GDP, which is dependent on the exports of hydrocarbons, decreased by -5.42% and -7.59% in 2018 and 2019 respectively while the unemployment rate exceeded 16%. In this situation, Tehran is forced to look for new sources of economic growth, while the authorities in Beijing are, in the current circumstances, the only partner that has the capacity and willingness to cooperate with Iran.

The agreement is primarily an opportunity for Beijing to strengthen its strategic position in the Middle East, ensure stable supply of raw materials at attractive prices and support one of the major competitors of the USA. In the long term, the agreement could open the way for overland energy link between Iran, Pakistan and China, which will enable to reduce the dependence on maritime routes across the Indian Ocean. Growing tensions with India, the US, Japan and Australia make it increasingly vital for Beijing to seek alternative forms of goods and raw materials transportation.

Nevertheless, the Chinese authorities must also take into account the responses of other countries in the region, particularly the positions of Saudi Arabia and the United Arab Emirates. So far, the Chinese strategy towards the Middle East has involved pragmatic cooperation with all the countries in the region, without any direct engagement in contentious issues. However, the priority has been the economic cooperation with the countries of the Arabian Peninsula, which, according to data from the American Enterprise Institute, attracted as much as USD 82 billion in Chinese investments between 2005 and 2020, whilst Saudi Arabia is the most important source of oil imports along with Russia (over 1.6 million b/d in 2019). In the case of Iran, this amount was equal to USD 26.56 billion, which proves that Tehran is a substantial but not the most significant partner and Beijing must maintain a balance in its policy.

The sum of USD 400-460 billion, appearing in a number of materials, would represent a huge capital injection into the crisis-ridden Iranian economy. However, these estimates should be treated with great caution as, firstly, there is still no official confirmation of any figure, and secondly, the implementation of the provisions of the agreement will be hindered by an increasingly complex network of US sanctions and the questionable profitability of some of the projects. In neighboring Pakistan, which is Beijing’s most significant partner alongside Russia, less than a quarter of the projects (USD 20 billion out of the USD 87 billion planned) have been completed within the China-Pakistan Economic Corridor (CPEC). The CPEC is the most important and advanced initiative under the Belt and Road Initiative, which illustrates potential obstacles to investment cooperation. Nevertheless, Iran’s deepening diplomatic and economic isolation means that the coming years will bring a strengthening of cooperation with China, although less spectacular than media reports might suggest.