In recent weeks Australia has become another Chinese public enemy owing to a dissimilar opinion to the Communist Party of China (CPC) about the epicenter and origin of the Covid-19 pandemic. The gradual escalation has led to a counteroffensive by the authorities of the People’s Republic of China (PRC) in diplomatic and economic fields. 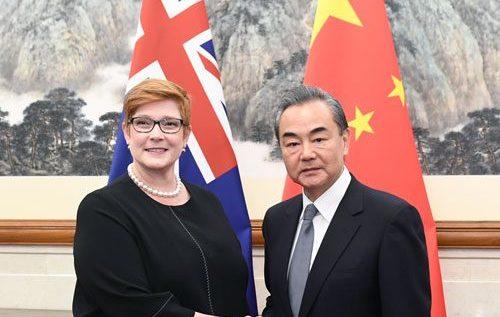 The deterioration of Beijing-Canberra relations was started by the Foreign Minister – Marise Payne, who called for an “open and transparent” investigation into the origins of the coronavirus epidemic in the second half of April. Australian Prime Minister – Scott Morrison, also supported this idea.

The above-mentioned plans met with a rapid response from the Chinese side. A spokesman for the Chinese Ministry of Foreign Affairs – Geng Shuang, called on the Australian authorities to reject the “ideological bias” in the matter of the pandemic. The Chinese Ambassador to Australia – Cheng Jingye, warned that Australia’s actions might lead Chinese citizens into thinking twice about travelling or studying in Australia as well as buying Australian goods, such as wine or beef. He said that such a campaign is not a good idea because it would be “politically motivated” and “hinder the fight the virus”.

Furthermore, experts as well as journalists publishing and speaking for the Global Times, warned that China could easily find alternative sources for importing goods. The authorities in Canberra should rethink their relations with China due to the fact that Australian economic ties with the Asian countries are stronger than those with the Western countries. Some very undiplomatic comments appeared as well, including “Australia is like chewing gum stuck to the sole. Sometimes you have to take a stone and scrape it off” and accusing it of being a servant/lapdog of the USA.

Further escalation turned out to be the plans of the Chinese Ministry of Trade to impose duty on barley imported from Australia because of the alleged dumping. According to the Chinese authorities, this move is not due to the recent statements by representatives of Australia, but is based on a 18-month long investigation. Although the value of Australian barley exports to China fell from $1.7 billion in 2018 to $600 million in 2019, China is still a key importer of this grain for Australia. Afterwards, beef imports from four Australian companies were halted. More than 50% of this meat goes from Australia to China and constitutes 5-6% of the market in the Middle Kingdom.

The articles which are supposed to prove that the coronavirus did not come from China, are continuously being published on the websites of the government, embassies and the state-controlled media. These texts suggest that the virus comes from Italy or the USA, regardless of the pandemic in the Middle Kingdom. A spokesman for the Ministry of Foreign Affairs recurrently confirms the willingness to cooperate and provide assistance as well as sensitizes that the matter of the coronavirus origin should be deliberated by the scientists and not by the politicians.

China is once again trying to alter the attitude and claims of another country by its economic means in terms of the Wuhan virus origin. Despite Beijing’s recent actions, the position of the government in Canberra remains unchanged. It is worth noting that the PRC is a very important trade partner for Australia (over 35% of exports). By comparison, only 2% of Chinese imports are from Australia, although including nearly 40% of the metal ores supply. A debate on relations with China has been ongoing in Australia for quite a long time already. There are several moot points – interference in politics and debate in the country, disputes about Oceania, clear opinions on the South China Sea as well as 5G cooperation with Huawei and ZTE, which are unfavorable for Beijing. Nevertheless, further projection of Chinese presence in Australia should be expected. It is a key country for breaching the American presence in the Indo-Pacific region. Should Australia forfeit its active participation in the naval operations, it would significantly weaken the regional leadership of the USA and could accelerate Beijing’s ambitions in the South China Sea.