Belt and Road in the fight against COVID-19

An online meeting took place between the Chinese authorities and representatives of the countries participating in the Belt and Road Initiative (BRI) on Thursday, June 18. The meeting concerned a declaration to maintain previous plans and strengthening cooperation in the face of the negative effects of the coronavirus pandemic. 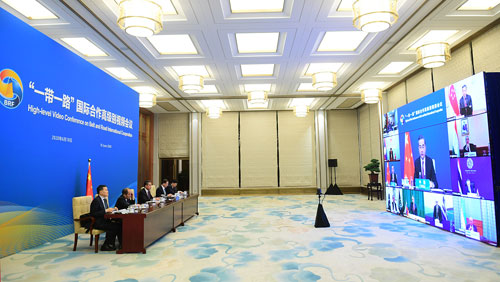 The conference was co-organized by the Chinese Ministry of Foreign Affairs, the National Development and Reform Commission, the Ministry of Trade and the National Health Commission under the name of “Belt and Road International Cooperation: Combating COVID-19 with Solidarity.” The meeting was chaired by Foreign Minister Wang Yi, who read out Xi Jinping’s letter. Among the guests were also foreign ministers or ministerial-level officials from 25 countries*. Tedros Adhanom Ghebreyesus – Director General of the World Health Organization (WHO), and Achim Steiner – Administrator of the United Nations Development Program (UNDP), attended the event as well.

In Xi Jinping’s letter we can read that a sudden attack of coronavirus has shaken the world economy and poses a threat to human health and life. China therefore wants to take the lead in the fight against the aforementioned problems. Solidarity, cooperation, multilateralism and long-term actions will be essential for achieving a success. The BRI project can make a significant contribution to this and will allow for the plan, which includes building a community of common destiny and unlocking development potential, to be realized.

Minister Wang Yi encouraged the construction of the “Health Silk Road”, research as well as production of medication and vaccines. He hopes to resume work on key infrastructure projects in order to secure industrial and supply chains so that a solid basis for economic recovery is provided in all countries. He has called for strengthening the cooperation on 5G technology, big data and artificial intelligence, which is expected to accelerate the creation of the Digital Silk Road (DSR), but also the establishment of the “Green Silk Road”. He strongly rejected unilateralism and protectionism and urged everyone to economic openness.

The meeting was followed by a joint statement expressing the willingness of the participating countries to revitalize the economy and medical cooperation in the fight against the pandemic. The leadership role of the WHO in the combat with the coronavirus was recognized. Discrimination, stigmatization, racism and xenophobia in response to the pandemic were criticized. Securing supply chains and promoting open international trade based on World Trade Organization (WTO) rules were upheld. Cooperation on new technologies was also encouraged.

The meeting was a further strengthening of Beijing’s position among the BRI member states and, at the same time, a reminder of the Chinese agenda for the world. Both Xi Jinping and Wang Yi reminded that multilateralism and free trade are the way of development for all. This is a fixed point in rhetoric of the Communist Party of China (CPC) against the activities of the USA. Support for the WTO, which in fact cannot function properly at the moment due to Washington’s obstruction in appointing the Members of the Appellate Body, was also included. This is yet another type of America’s pressure directed at China in the face of a trade war and, according to the USA, unfair interpretation of China’s status of a developing country in the WTO as well as the excessive scope of rulings by the arbitral tribunals. Beijing’s defense of the WTO is due to China’s considerable economic success as a result of the WTO membership in addition to a selective approach to WTO rules, which works in favor of the People’s Republic of China.

Interestingly enough, both in a statement and a speech of Wang Yi, there is a reference to ecology, which is a challenge for contemporary China. The WHO’s leading role in the fight against the virus was supported, which is not surprising as the current Director General has been on China’s side since the beginning of the pandemic. Also noteworthy is the fact that the countries of the BRI project are encouraged to cooperate in the area of new technologies (5G, big data, artificial intelligence, etc.). The statement does not lack the words condemning xenophobia and racism during the pandemic. Chinese propaganda is trying to distance itself from accusations regarding the origin of the coronavirus and its spreading from China, calling this racism, among others. It is worth noting that several European countries, such as Belarus, Serbia, Greece and Hungary participated in the conference. Their presence cannot come as a surprise as all of them are counting on further projects and funding from Beijing while their agenda already is or is increasingly becoming pro-Chinese.