Undoubtedly, the topic that currently dominates the public debate in Poland in terms of foreign policy is Belarus. The unprecedented protests, which have spread not only to the capital city of Minsk, but also to smaller towns in the countryside, and the scale of these protests – Belarus has not been a witness of such events till date. The resistance against the dictator is significant. The brutal reaction of the security forces at the beginning of the protests seemed to only intensify the fury and resistance of the society. 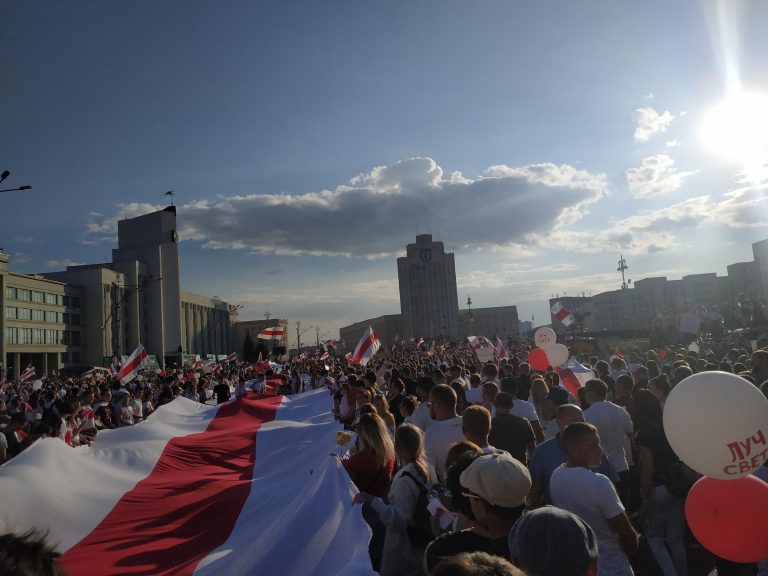 The situation in Belarus is of interest to all neighboring countries – especially Lithuania, Poland and naturally Russia, for which this country is a part of the sphere of influence and a crucial strategic area. The multifaceted dependence of Belarus on Russia will be a factor influencing further development of the situation. It should be remembered that while Alexander Lukashenko was the executor of Russian interests in his country, the vague views of opposition leaders on the matter of future relations with Russia may not lead to any drastic changes as many Western and Polish commentators would like.

Nevertheless, this issue is presented differently in the Russian narrative. Poland is to be the main initiator of protests in Belarus. The opposition is to be led by the Polish forces, further, which are in charge of all media in Belarus, except, of course, the official ones. The Russians can be very precise in these inventions, e.g. former GRU officer – Lieutenant Colonel Sergey Kozlov, commenting on the situation in Belarus for “Komsomolskaya Pravda,” said outright that it is the result of the activities of the Central Group of Psychological Actions from Bydgoszcz, which is to specialize in propaganda and manipulation. The group was already supposed to be active in the Ukrainian Euromaidan. Certainly, Poles are to act for the benefit of the Americans, but the situation is to be quite new because until now, e.g. in Kiev, the Americans were in action themselves whilst now they are acting through Poles.

The “Solidarity” has apparently been strongly engraved in Russian memory, because they recall its example as yet another proof of Polish involvement, a kind of Polish trace in protests in Belarus. Why? Well, the pattern of the opposition’s actions is supposed to be a duplicate of the methods used by the “Solidarity,” where the central role was played by workers who started protests in the country’s key factories, which in turn forced the authorities to make concessions. Although this has little to do with the reality, it should be noted that 40 years later “Solidarity” is a point of reference for Belarusians fighting for freedom. The Belarusian version of Jacek Kaczmarski’s famous song “The Walls” (Mury) is widely sung thus becoming a symbol.

Coming back to the Russian alternative version of the events – all these Polish operations, carried out with the support of the Lithuanians and Ukrainians, are to serve the purpose of integrating Belarus into the Polish sphere of influence. According to the divagations of Sergey Markov – a pro-Kremlin political scientist, after the victory of the opposition in Belarus, power would be exercised by Polish puppets. Companies from across the Vistula River would buy out Belarusian companies and Poles would become the new oligarchy. Moreover, the Belarusian language would not be spared, but subjected to polonization. Of course, for Belarusians such a government would only bring misery.

However, if somebody thinks that this is the ultimate goal of Poland, he or she is sorely mistaken According to Russian propaganda, it is only an intermediate target. Primarily, Poles want to block Russia and lead to the overthrowing Vladimir Putin. This is supposed to be an element of the eternal rivalry between Moscow and the Polish Republic for dominance over this part of Europe. Such stories are received with utter disbelief in Poland, because similar ambitions were abandoned by the country with the Peace of Riga in 1921.

A competing narrative says that Poland is directly interested in recovering the land that previously belonged to it and incorporating it to the state. Above all this is supposed to apply to Grodno. Alexander Lukashenko himself seems to embrace this propaganda, desperately seeking his own salvation – creating an impression of a Polish threat is part of this activity. Hence the movement of elite units to the border with Poland, right to the vicinity of Grodno. Some analysts believe that Lukashenko may want to stage a border incident, which could be a pretext to call for help of the Russian troops in order to suppress the resistance of the Belarusian people towards to the dictator. It is highly questionable whether the Russians would be interested in taking part in such a game. Moreover, it may turn out that Moscow will successfully achieve its goals even without Lukashenko. This is undoubtedly facilitated by the ambiguous attitude of some Western politicians and commentators, who do not recognize the importance of the aspirations of the Belarusians and advocate for a quick implementation of a scenario, which will respond to Moscow’s expectations.

In order to discourage Belarusians and Russians from protesters in Belarus, Moscow is using an old Comintern’s method of attributing agency connections with a foreign country in addition to reproducing with modern language the formerly known clichés about “Polish lords,” whose sole goal is to exploit Eastern Slavs and realize their imperial dreams. The use of such a narrative in a new form indicates the concerns Russia has about the increasingly active Polish policy in the East.