17+1 Summit: The Difficult Future of the Initiative

A several-hour long virtual summit of the Heads of States of the 17+1 format members, i.e., the Central and Eastern European Countries and China, took place on February 9, 2021. For the first time in the history of the initiative, China was represented by the President of the People’s Republic of China (PRC) Xi Jinping. It was another opportunity for Beijing to make its presence in the region known. The event was not enthusiastically received by countries in the region and the future of the format is now at stake. 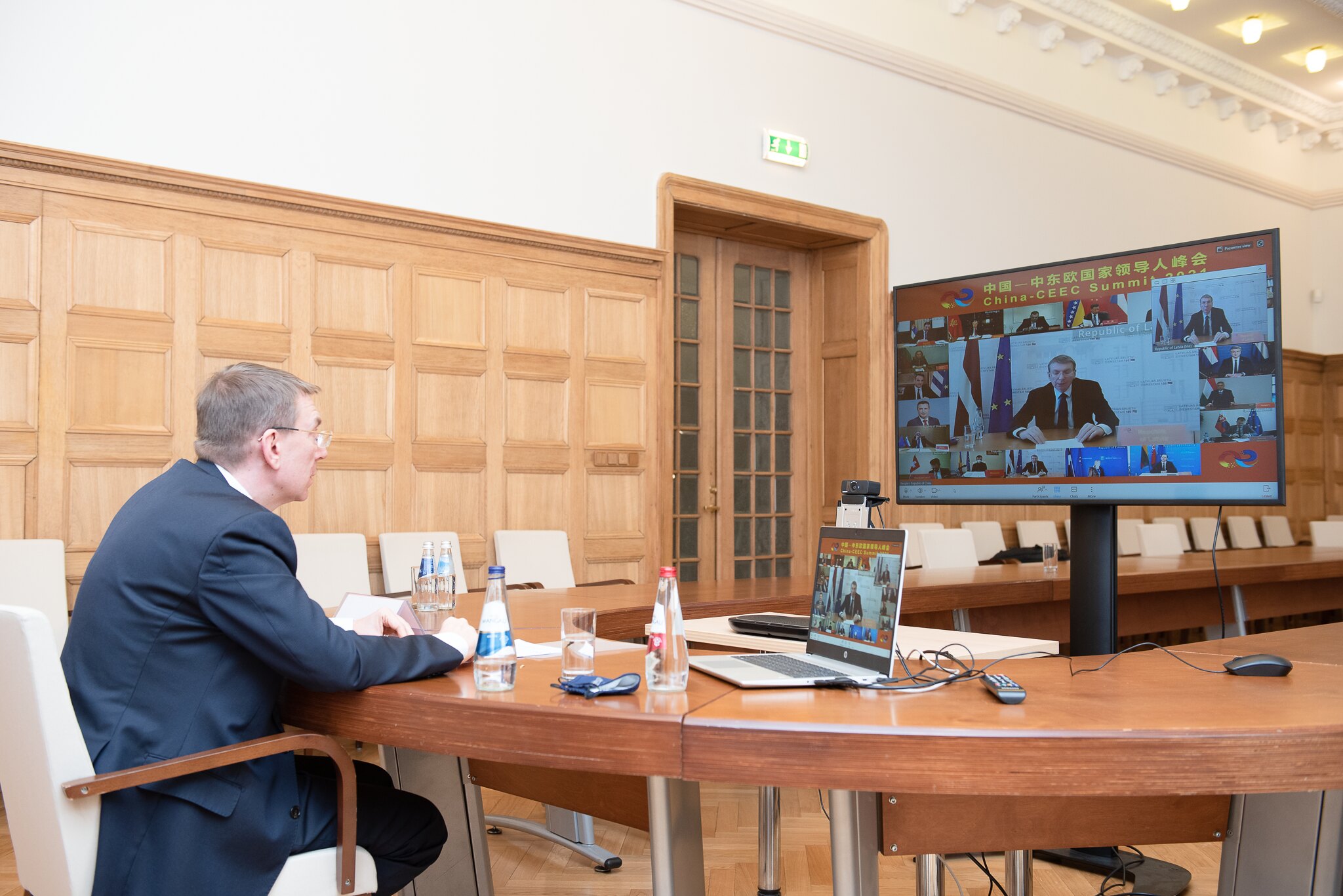 Summits of the 17+1 format were initiated in 2012, initially as the 16+1 and, since 2019, after Greece had joined the initiative, have been held in the current form. It was established to streamline political, economic and interpersonal cooperation between the People’s Republic of China (PRC) as well as Central and Eastern European Countries (CEECs). The annual summit was originally planned to take place in Beijing in April 2020, yet, as a result of the pandemic, it had to be postponed to a later date.

Xi Jinping’s speech to the CEECs focused on economic matters. For instance, he underlined the growth of trade between China and the countries of the region, which has increased by nearly 85% in comparison to 2012, yet the growth of Chinese imports from CEECs is 22% higher than exports. Moreover, he pointed out that China-Europe Railway Express operated over 30,000 freight services to our region so far. Xi announced that China aims to import more than $170 billion worth of goods from CEECs in the next five years and double agricultural exports. Additionally, the General Secretary of the Chinese Communist Party (CCP) focused on innovation, green technologies, the fight against the pandemic, in addition to sports cooperation, related to the upcoming Winter Olympics in Beijing.

According to the Chinese Ministry of Foreign Affairs, a total of 88 documents were signed, of which 35 are intergovernmental agreements and 53 are trade agreements. These are bilateral rather than multilateral arrangements. They concern mainly the agricultural sector, renewable energy and interpersonal exchanges, i.e., scientific and media cooperation as well as youth exchanges. On the list, published by the Chinese Ministry of Foreign Affairs, there are no trade agreements with Poland, yet there is one with the Czech Republic, two with Slovakia and 11 with Hungary. Among all countries in the region, only Serbia had more agreements than Hungary – 14, while the subsequent countries in terms of the number of signed agreements – North Macedonia and Greece – had four each. This demonstrates which countries have the best relations with the PRC currently.

The opening of the Chinese agricultural market is crucial for the countries of the region. A number of representatives did not hide their dissatisfaction in this regard. Slovakia was one of the few countries to have had minor success in this area recently. Just a day before the summit, it signed a protocol under which it could potentially sell more lamb to China. Most probably that is the reason why the Slovakian Prime Minister attended the summit, despite earlier speculation that he might be absent.

Chinese pro-government media outlets portrayed the summit and cooperation between Beijing and the 17+1 member countries as successful. They presented Chinese entrepreneurs and provincial governors who were satisfied with cooperation with the CEE region. Multiple statistical data were cited. According to the Chinese Ministry of Commerce, in 2020, the total trade volume of the PRC with the 17 CEECs reached more than $103 billion, which is an 8.4% growth and the first time when the $100 billion mark was exceeded. The data was expected to prove the thriving economic relations between China and the region. Rich and diverse agricultural resources of the region, tourism attractiveness as well as Beijing’s support for the modernization of CEECs were highlighted. Moreover, it was vital for Chinese media to indicate cooperation under the Belt and Road Initiative (BRI), which leads to growing number of direct investments. The PRC is also looking forward to implement more projects in the field of digital economy. It was emphasized that the 17+1 initiative was established as a response to the European debt crisis in 2012, thus pointing to Europe’s economic weakness. The very fact that the summit took place allowed the PRC to strengthen its narrative concerning the partnership between China and Europe.

Nevertheless, the growing dissatisfaction of some countries, that participate in the initiative, with their cooperation with large Asian partner cannot be hidden. During the meeting, six of 12 EU members that are part of the format – the Baltic states, Bulgaria, Romania and Slovenia – were represented only by their ministers, not heads of states or governments. Politico reported that the day before the event, Chinese diplomats were putting pressure on the capitals of these countries to send “a higher level representation.” The Visegrád Group countries were an exception – they sent their highest representatives: President Andrzej Duda (Poland), Prime Minister Igor Matovič (Slovakia), President Miloš Zeman (the Czech Republic), and Prime Minister Viktor Orbán (Hungary). However, this does not mean that all of these countries have excellent relations with Beijing.

Growing skepticism about China is particularly evident among the Baltic states. In recent weeks, Lithuania has made several anti-Chinese decisions concerning, for instance, plans to open a trade office in Taiwan later this year or exclude products manufactured by the Chinese company Nuctech. There have been rumors that Vilnius might exit the 17+1 initiative. On the other hand, Estonia has warned against Beijing’s desire to create a divide between Europe and the US. Also noteworthy is the fact that Romania cancelled a deal with China to build nuclear reactors at the Cernavodă power plant while the Czech political parties agreed that Chinese companies should not participate in a tender for the construction of a new nuclear power plant. The skepticism of countries in the region about cooperation with Beijing can also be observed in terms of the restrictions imposed on companies, such as Huawei, preventing them from building local 5G network infrastructure. Romania, Poland, Estonia, Latvia, the Czech Republic, Slovenia, Albania, Lithuania, Greece, Bulgaria, Slovakia, North Macedonia and even Serbia have signed memoranda of understanding with the United States on this subject or joined Washington’s Clean Network initiative. This is one of the sensitive topics for China.

All indications are that Chinese actions in the CEE region will most likely concern the Western Balkan countries, in turn creating a north-south divide among the members of the initiative. Some will try to remain in the format, also as a consequence of the COVID-19 pandemic and vaccine shortages. The presidents of the Czech Republic and Poland, for example, have expressed a desire for preliminary talks on the acquisition of Chinese vaccines manufactured by Sinopharm. Hungary and Serbia are already administering them, while North Macedonia and Montenegro have purchased the first doses. This could be a new way for Beijing to build a positive image among CEECs. Also, in terms of transport, the PRC will be establishing a corridor through Greece and Serbia to Hungary, which is a logistics hub for Chinese goods on their way to Europe. The possibility of France joining the initiative is also interesting (though unlikely). On February 26, during a phone conversation with Emmanuel Macron, Xi Jinping proposed that Paris could actively engage in the collaboration with CEECs in order to create a new trilateral formula in EU-China relations. The PRC presented the same idea to Germany in 2018. Whether this proposal was consulted with the 17 member countries is unknown, which illustrates Beijing’s perception of the region, treating it as an object rather than a subject in international relations and a presumed sphere of influence.

The summit was held less than a month after Joe Biden, who is trying to repair relations with Europe, became US president. Nonetheless, America should not be afraid that it would lose influence in the region. Quite a few members of the format are interested in close security relationship with Washington and NATO, more than most of the EU, because of concerns about the threat from Russia. For this reason, China understands little interest in the 17+1 format as a consequence of the American pressure. “We recognize our European partners have their own interests and relationships, and we are not forcing them to choose between China and the United States. However, we remain concerned that China has frequently used multilateral organizations as a tool to advance the PRC’s economic, national security and foreign policy interests at the expense of other countries’ peace and prosperity, respect for human rights and the rules-based international order,” said US State Department spokesperson Ned Price when asked about the 17+1 format.

The future of the format seems bleak. The participants of the summit failed to agree on standard “guidelines” (纲要). Instead, they issued a simple “action plan” (活动 计划) for the upcoming year. What is more, the date of the next meeting has not been set. Potentially, the format will change and the summits would take place, for example, every two years instead of annually. Xi Jinping, who replaced Premier of the State Council of the PRC Li Keqiang as the host of the summit, will pay the political price for the situation. He was supposed to attract other high-ranking officials, but that did not happen.

Beijing’s plans to import $170 billion worth of goods from the CEE region might be difficult to implement, especially given its “dual circulation” strategy oriented at the domestic market. Many of the successes of the 17+1 initiative mentioned by Xi Jinping are in fact the outcomes of bilateral agreements, such as the acquisition and expansion of the Greek Port of Piraeus, or the modernization of the Budapest-Belgrade railway. Multilateral formats, such as 17+1, are theoretically supposed increase trade. However, this is not the case – the effects are negligible, which is noticed by numerous countries of the initiative that are discouraged by this form of cooperation. All these promises and proposals have faced a reality check. Moreover, it does not seem that China is attempting to change this state of affairs. Also, treating CEECs as a monolith by Beijing and using the same empty promises, has largely been unsuccessful. We can therefore expect further marginalization of the multilateral format in terms of contact between China and the countries of the region as well as a focus on developing bilateral relations.