Zelensky Offers Putin Peace Talks, the Kremlin Has a Problem

The idea to hold talks on the Donbass region and Crimea in the so-called “Normandy format” with the extra participation of the United States and the United Kingdom is not very convenient for Russia for a number of reasons. First, Volodymyr Zelensky has now taken the diplomatic initiative in the dispute over the occupied territories. Second, Moscow has to reject his offer. In this way, while Kyiv gains international recognition for both of these reasons, Russia loses it. This time, it is Ukraine that comes up with a peace initiative while Moscow tries to block it. The only question remaining is: how will the Kremlin justify its decision? 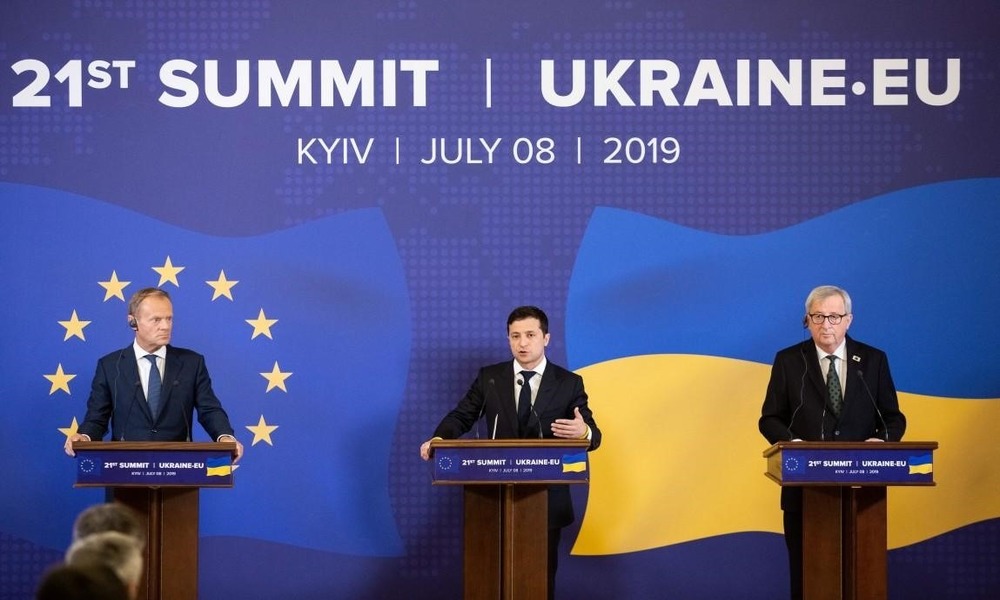 President of Ukraine Volodymyr Zelensky made an offer to Russian President Vladimir Putin to hold talks on Crimea and the Donbass in a new format, with the participation of the leaders of not only France and Germany, but also of the United States and the United Kingdom. To make such a proposal, Zelensky used a pretext, that is, he saw through Russia’s deliberate provocation surrounding a television bridge between Moscow and Kyiv under the slogan “We need to talk”. The Ukrainian president said that such a discussion could take place in the capital of Belarus, Minsk. Alexander Lukashenko has expressed his support for Zelensky’s proposal, the Press Service of the President of Belarus reports. What is interesting, in this way Lukashenko allows the Americans and the British to participate in the peace negotiations. However, such a solution is completely unacceptable to the Russians. The Kremlin did not reject the idea straight away, because it would look bad in the international arena. The Press Secretary for the President of Russia, Dmitry Peskov said that this is an entirely new format of talks, therefore Russia has to take a closer look at the offer. Nonetheless, Peskov has already suggested that the proposal will be rejected, because, as he pointed out, the United States is not a party to the Minsk Agreements. Since the May presidential elections in Ukraine, the Kremlin has not congratulated Zelensky on his victory. At the beginning of June, Peskov announced that “as of now there are no meetings planned” with Zelensky in the schedule of the President of Russia.

Zelensky took the initiative to change the format of the peace talks right after the end of the recent EU-Ukraine summit in Kyiv. The EU leaders have assured Kyiv that the sanctions against Russia for the annexation of Crimea and the Kremlin’s support for separatist forces in the Donbass region will be upheld. Both sectoral and Crimean sanctions will be extended for another 12 and six months respectively. Already in mid-June, in an interview for the Bild newspaper, Zelensky did not rule out the possibility that Ukraine might need to depart from the Minsk peace process towards a more effective format of talks. The Ukrainian president gave the interview during his visit to Berlin where he received a clear and unambiguous declaration from Angela Merkel herself that the sanctions imposed by the West against Russia for the annexation of Crimea and its role in the armed conflict in eastern Ukraine will not be lifted until the sovereignty of the Ukrainian state is fully restored.