An online summit of the BRICS members (Brazil, Russia, India, China and South Africa) was held on November 17. It was already the 12th meeting of this format, this time chaired by Moscow. Xi Jinping once again presented the Chinese vision of world order, calling for cooperation and maintaining multilateralism. 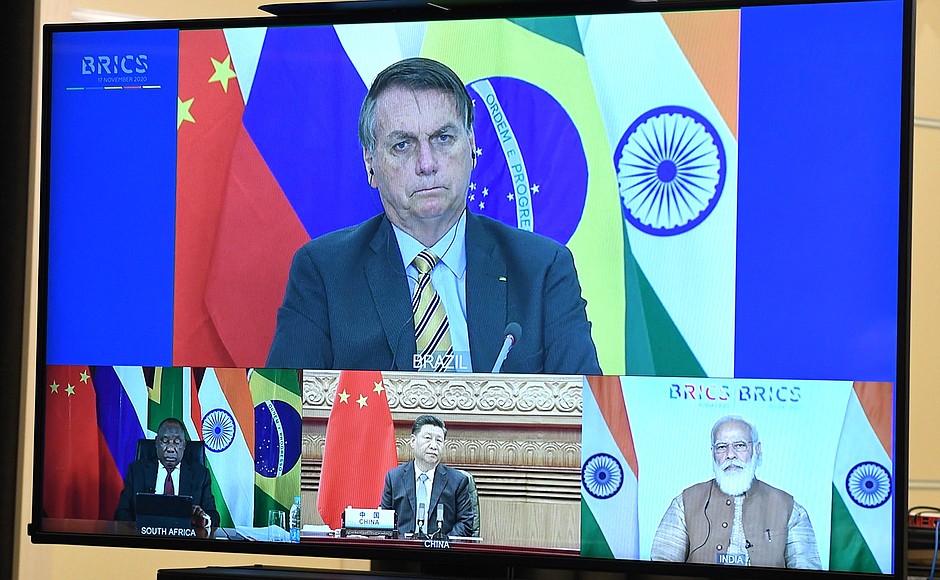 Firstly, as usual on such occasions, Xi Jinping expressed his strong opposition to unilateralism and “bullying” some countries. In his opinion, the withdrawal from multilateral groups and the renunciation of agreements is trampling the dignity of all states. The General Secretary of the Chinese Communist Party (CCP) said, among others, that “the trend toward multipolarity and economic globalization cannot be turned around.” Furthermore, Xi expressed opposition to interference in the domestic affairs of other countries as well as unilateral sanctions.

Secondly, the General Secretary of the CCP called for international solidarity, cooperation in the fight against the COVID-19 pandemic and a key role of the World Health Organization (WHO). He stated that Chinese companies are conducting phase-III clinical trials of vaccines against COVID-19 with partners from Russia and Brazil as well as invited South Africa and India to this cooperation. He suggested that five BRICS countries should organize a symposium on traditional medicine to explore its role in the prevention and treatment of COVID-19. He added that attempts to politicize the pandemic lead to disruptions in the process of solving the problem.

Thirdly, Xi stressed that openness and innovation should be pursued. According to his opinion, it is necessary to stand firm for building an open world economy, rejecting protectionism and upholding the multilateral trading system, the core of which is the WTO. As an example of PRC’s actions in this matter, he pointed out that China will establish an innovation center in Xiamen (special economic zone, Fujian Province) in order to speed up the advancement of cooperation among BRICS countries in terms of the Fourth Industrial Revolution. He emphasized that openness and innovation can stimulate global economic recovery. Additionally, he invited the BRICS members to join the Global Initiative on Data Security, promoted by China.
Fourthly, according to the Chinese leader, the priorities of the international order should be people’s livelihood and promoting sustainable development. Elimination of poverty must become a primary objective and more resources have to be allocated to poverty reduction, education, health and infrastructure development, especially in terms of developing countries.

Additionally, Xi frequently raised the notion of caring for the environment. He called for supporting ecological and low-carbon development to “strive for harmony between man and nature.” He recalled Beijing’s measures to peak carbon dioxide emissions by 2030 and achieve carbon neutrality by 2060.
An anti-terrorism strategy of the BRICS and an updated plan of economic partnership of the group until 2025 were approved during the Summit. The documents, however, are a more general presentation of the areas where cooperation is needed and do not have specific implementation deadlines.

Xi, as in almost every speech, recalled that economic cooperation and multilateralism are beneficial for everyone. Moreover, he expressed openness to support the fight against the pandemic. The innovation center of the BRICS countries may be an interesting initiative. For the time being, there are no details of this project, but it could indeed bring the members of the group closer and allow for conducting joint research in the field of new technologies. The question is whether there is a will among all countries for such actions.

The Chinese commentators on international affairs recalled the words of Xi, who compared the BRICS economies to five fingers of a hand, saying that they are “short and long if extended, but a powerful fist if clenched together.” Together, the BRICS members represent about 42% of the global population and 23% of the world’s GDP. The BRICS countries could probably be successful together, but there is no unity and good cooperation among them. India is a good example of this. The border dispute between India and China, New Delhi’s fears of joining the RCEP (Regional Comprehensive Economic Partnership, to which Beijing is a signatory) and building alliances against the Middle Kingdom, indicate that the BRICS members are not united.

It is worth noting that General Secretary Xi Jinping has been highly active this month. Earlier, he participated in the meeting of the Shanghai Cooperation Organization and the Paris Peace Forum. On November 20, he took part in the 27th Asia-Pacific Economic Cooperation (APEC) Economic Leaders’ Meeting and the day after in the 15th G20 Leaders’ Summit. The series of conferences strengthens China’s role and its importance on the international scene. They show that China is a key player in the global structure as well as that its voice is significant in many regional and international organizations. Moreover, this builds a symbolic alternative to the “global leadership” of the United States, which showed isolationist tendencies during Donald Trump’s presidency.