In 1940, the United States established formal diplomatic relations with Saudi Arabia, yet both countries managed to develop bilateral ties seven years before along with the Saudi go-ahead for U.S. oil exploration and the creation of a joint U.S.-Saudi oil company Aramco. Currently wholly owned by Saudi Arabia, the oil colossus have long cemented the alliance between Washington and Riyadh. 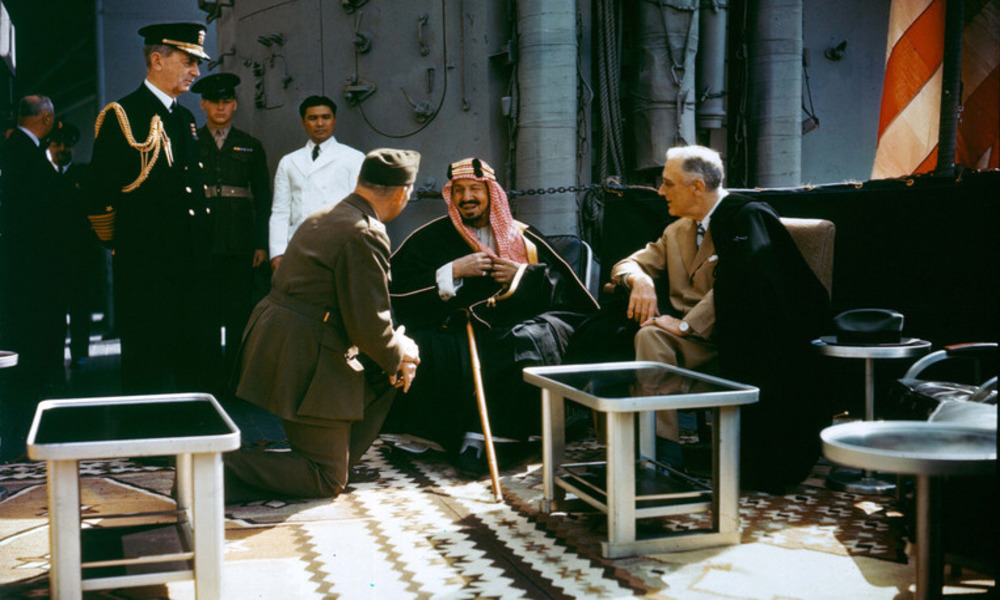 Since oil deposits were discovered in Saudi Arabia in 1938, the U.S. stance toward Riyadh underwent gradual changes, becoming more and more friendly. In 1943, U.S. President Franklin D. Roosevelt made Saudi Arabia eligible for the U.S. aid under the Lend-Lease Act, enabling Saudis to acquire U.S.-made military equipment. In 1945, when en route from the conference in Yalta, he held a meeting with King Abdulaziz ibn Abdul Rahman Al Saud. The first landmark meeting between both leaders emerged of crucial importance for Saudi Arabia, inasmuch as it brought informal yet essential arrangement that laid the groundwork for the Saudi military buildup. Since then, Saudi Arabia’s potential in this respect seemed rather modest, though.

Bilateral attempts to strengthen ties between Washington and Riyadh can be traced back to the Cold War period when the former became aware of an impact exerted by a skillful foreign policy toward Saudi Arabia as a powerful tool for defying the Soviet Union. Washington’s partnership with Riyadh, alongside the decision to lower oil prices, emerged as one of the critical factors leading to the dissolution of the Soviet Union.

In the years that followed, U.S.-Saudi partnership, which flourished under Riyadh’s aid in Washington’s efforts in challenging the Soviet Union, remained at a good level, both politically and economically. In the 1970s, both partners drifted towards the first severe crisis in their bilateral ties, which clearly set boundaries Riyadh could not cross even in a bid to maintain friendly relations. Prior to the Iranian revolution, Saudi Arabia’s only arch enemy was Israel, which was a bitter pill for the United States whose unequivocal support for Israel during the 1973 Yom Kippur War triggered Riyadh’s decision to halt oil supplies to its American ally, as a result of which the first serious oil crisis broke out. All in all, it was skilfully tackled by U.S. Secretary of State Henry Kissinger, yet Washington’s message for Saudi Arabia deemed clear, stating that no further partnership is possible without American loyalty.

The United States was given a chance to “redeem itself” in 1990 after Saddam Hussein, who served as President of Iraq at that time, declared war on Kuwait. Iraq accused Kuwait of stealing oil from its deposits, which served as a pretext to invade the emirate. Officially, the conflict was triggered by Hussein’s unpaid debt owed to Kuwait to conduct wars against Iran between 1980 and 1988. Saudi Arabia took the side of Kuwait while facing threats from a numerous Iraqi army, all parties to the conflict had to acknowledge that with no U.S. support, Kuwait has no chance of winning, even aided by Saudi Arabia. Saudi Arabia invited U.S. troops into its territory, in the close neighborhood of the Saudi-Kuwait border, an event that gave origin to the Operation Desert Storm.

Although defeating Hussein emerged as a major success of allied forces, attention should be drawn to negative consequences of this military operation. The U.S. military presence in the Gulf arose as one of the multiple factors behind the awakening of extreme Islamic fundamentalism in the region as most of its members could neither accept American troops to be deployed in the area nor were they eager to put up with a military rapprochement with the United States. This ultimately laid the groundwork for establishing Al-Qaeda, a terrorist network founded by Osama bin Laden that claimed responsibility for the 9/11 attacks.

Many threats posed to friendly ties between Riyadh and Washington arose under the Obama presidency when Washington no longer relied upon Saudi oil supplies. Naturally, it did not become fully independent of Saudi-sourced oil yet Riyadh experienced a decline in income, which referred to U.S. pursuits to develop shale gas and oil infrastructure.

Also, Obama raised the ire of Saudi officials who viewed his stance toward the Iranian issue too soft. Starting from 1979, Saudi Arabia became accustomed to adopting a similar standpoint on Iran to that represented by the United States. Obama shifted U.S. initial approach toward Tehran, mentioning a peaceful solution to Iran’s nuclear problem while lifting Western economic sanctions. Not surprisingly, his ideas were by no means warmly welcomed by Saudi Arabia;

for its part, Riyadh established ties with China, viewed as a potential trade outlet, and Russia that, like Saudi Arabia, got involved in the fight against Daesh (so-called Islamic State). Combating Daesh emerged as a priority for Saudi Arabia as the terrorist group posed a threat not only to Iraq and Syria but also to the Kingdom itself. Earlier, ISIS members reiterated their intention to occupy two sacred Muslim lands. Located in Saudi Arabia, both Mecca and Medina are considered the holiest places in Islam, with the former being place of an annual hajj (pilgrimage) of about 2 million people, which makes it extremely vulnerable to a terrorist attack. Given the fact that the King of Saudi Arabia holds the title of the Custodian of the Two Holy Mosques, it does not come as a surprise that Riyadh opted for a political rapprochement with Moscow, determined to defy the so-called Islamic State.

Most importantly for Riyadh, Trump’s standpoint toward Iran is stricter than that assumed by his predecessor. This has been reflected by following U.S. restrictions, the Middle East summit in Warsaw and Washington’s critical attitude towards Tehran’s compliance with the nuclear deal. The United States and Saudi Arabia are also tightening their armaments cooperation as in recent years the latter concluded agreements to purchase U.S.-made weapons worth the total of $100 billion. After Obama’s presidency, which was challenged by many problems, Trump’s policy may seem a nice change yet U.S.-Saudi mutual relations should be ultimately assessed once the president ends his current term.

As an actual Saudi leader to introduce further changes, Mohammed bin Salman, a son of King Salman bin Abdulaziz, has been a hope for both superpowers to tighten their bilateral ties. He also announced his intention to adopt Vision 2030, a comprehensive plan for Saudi Arabia aimed at reforming the country towards a new era. Saudi Vision 2030 is a plan to increase personal freedoms, transform Riyadh into a place connecting the three continents (Europe, Africa, Asia) and make Saudi economy independent of oil exports, mostly thanks to investing in new technologies. Saudi pursuits were reflected by the Saudi Prince’s visit to Washington last year, during which he paid much attention to holding talks with CEOs of global tech giants, including Facebook or Amazon.

Despite having brought a set of advantages to the country, the young Crown Prince was for Riyadh a source of worries. In October 2018, the world’s eyes turned on Saudi Arabia after more facts were disclosed on the assassination of Jamal Khashoggi, a journalist, and critic of the Saudi government. After months of investigation, it became clear that this act of terror was inspired by Prince Mohammad. Public opinion demanded a clear position to be assumed, along with imposing sanctions, mostly U.S. ones, against Saudi Arabia. Such a move has, however, never taken place while U.S. President Donald Trump did not adopt an unequivocal position on the attack.

Despite earlier errors, Saudi Arabia may see the United States as its economic, political, and military ally. Both parties are aware of the benefits they are capable of gaining through their mutual undertakings or “turning the blind eye” on the partner’s actions. This does not have to transform into a permanent state of affairs, though; Washington is consciously committed to searching for new global partners while making attempts to become independent of Saudi oil shipments. A familiar rival may unite both allies stronger than common goals, with Iran remaining Saudi Arabia’s arch enemy. A shared stance toward Iran is a link for U.S.-Saudi relations that needs to be appreciated and seen as a framework for further partnership.

A graduate of Internal Security and a student of Arabic Studies at the University of Warsaw. She specializes in issues related to Arab states, Islam and modern terrorism.