War with Ukraine: Putin Responds (Not Only) to the Russians

For many, Vladimir Putin’s annual live television call-in show did not appear to be surprising. The broadcast’s main idea reflects the foreign, internal, security and economic policies carried out during the new presidential term. Also statements on the Ukrainian conflict aroused some strong emotions. Some observes even claim that Russia’s president has threatened to destroy Ukraine’s statehood. But is that really true? 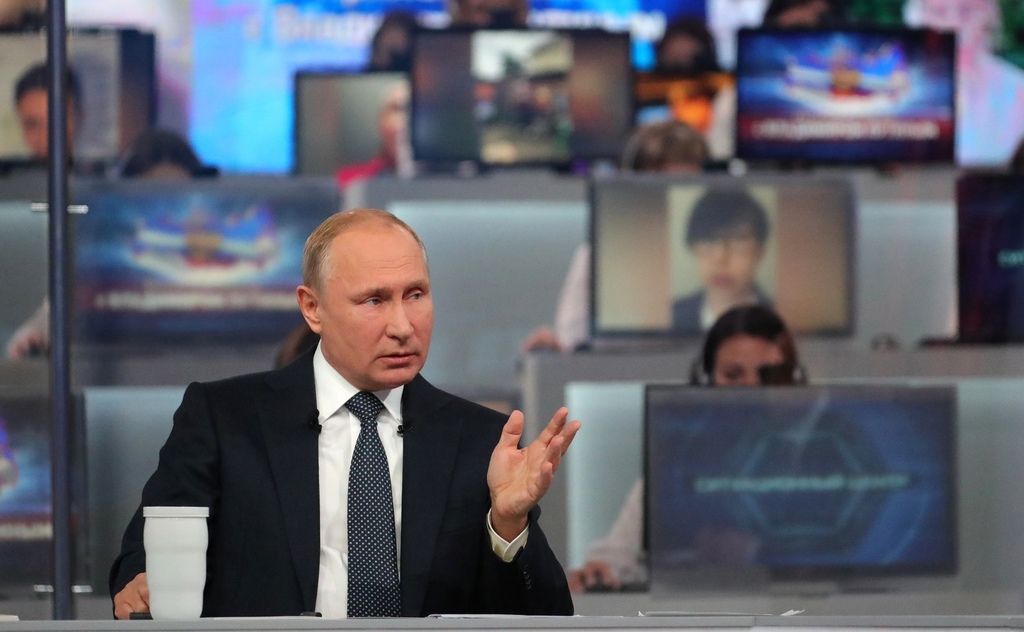 On June 7, for the sixteenth time in history, Vladimir Putin answered questions from citizens as well as he addressed their requests and complaints. At the same time, it was also the first Q&A show during Mr Putin’s new presidential term. One of the questions concerned the conflict with Ukraine; it came from a Russian citizen from the occupied Donbass expressed his concern that Ukrainian army might attack during the World Cup that will be held in Russia from mid-June to mid-July. Mr Putin expressed hope that “such provocations will not take place” and he warned that “if it happens, this will have very drastic consequences for Ukrainian statehood as a whole”. He also announced that Russia would continue to show its support to the so-called “people’s republics” since the Ukrainian authorities were unable to solve the problem of these territories. In addition, Mr Putin stipulated that his country would do everything for the situation in the east of Ukraine to be resolved within the framework of the Minsk process. The president’s statement was immediately commented on by Ukraine’s Secretary of the National Security and Defence Council Aleksandr Turchynov. He claimed that his country would remain independent regardless of, as he named it, “maniacal desires of imperial revanchists.”

Each question, which was asked during Direct Line annual show, had been carefully selected. So there is no doubt that the Kremlin waited for a question about the alleged threat of a Ukrainian invasion on the occupied part of the Donbass. Mr Putin’s response was balanced; Russian president presented himself as a responsible statesman who does not take on any “provocation”, nevertheless, if the threat was real, he would be able to provide a strong answer (as evidenced by his very strong wording: “very serious consequences for Ukrainian statehood”). The Kremlin sends a signal to the West that the Ukrainian authorities are responsible for problems while Moscow pursues to establish a dialogue within the framework of the Minks agreement. It can be considered as part of the informational operation aiming to prepare the world for the next escalation of the conflict in Donbass. In this case, there occurred a classic reversal of the Russian propaganda. If there is a provocation, it will be started by the Russians. And it should be remembered that Russia’s tradition is to cause armed conflicts during world’s major sports events. And possible escalation of fights will not be tantamount to the outbreak of a full-scale war. It is not in Russia’s interest as the country has been recently trying to warm up its relations with the West. It seems that any change in Russia’s policy towards Kiev may possibly take place until after the elections in Ukraine while the direction of this change will mainly depend on the voting results.