War or Peace? Erdogan Flies to Moscow for Syria Talks

When it became clear that Turkish President Recep Tayyip Erdogan will head to Moscow, as Putin has no plan to visit Istanbul, and the Ankara-sought meeting will not involve German and French leaders, it seemed that the Kremlin had outfoxed Turkey. Erdogan was believed to be cast in the role of supplicant when arriving in Russia. The situation yet changed in less than forty-eight hours as Turkey declared a major offensive against the Syrian government on March 1 in a step that boosted Erdogan’s negotiating position. In the Kremlin, the Russian and Turkish leaders may hold what could turn into a conclusive meeting for war-ridden Syria. Turkey is probably ready to strike a deal provided that this helps Erdogan save face, while Ankara will not see any changes to Idlib province –– compared to what happened there before the offensive –– as humiliating. It is worth remembering that Putin is not as strong as it may seem, and with Turkey’s advancing any further into Idlib, the al-Assad regime’s position may grow weaker. Since 2015, Vladimir Putin’s key strategic focus has been to recapture the whole Syrian territory to give it into the hands of Bashar al-Assad. 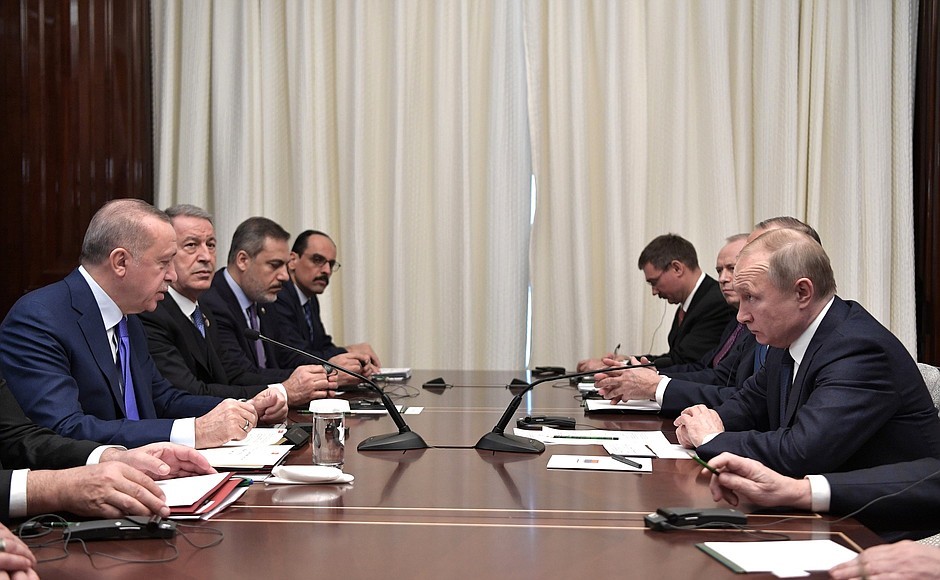 Turkey is calling for an immediate ceasefire in Idlib, while Russian-backed Syrian regime forces ought to withdraw beyond the line set by the de-escalation deal Russia and Turkey had inked back in 2018. Moscow so far has refused to accept the peace deal, backing the Syrian-led offensive while portraying it as an “anti-terror crusade” triggered by Turkey’s failure to comply with the 2018 Sochi peace deal for Syria. Russian propaganda and top pro-Kremlin journalists began to shore up a narrative on Turkey’s illegal presence in Syria. Moscow has long used an analogous argument to target the United States. By contrast, Russia can legally justify keeping military personnel in Syria after it was invited by the Damascus government. According to what Russia is saying, Turkey’s losses in Syria come out of their illegal being in the area where “they back terrorists,” as reported by Russian media outlets. Russia said it could not guarantee the safety of Turkish aircraft over Syria, Russian Defense Ministry said on March 2 in a statement. Rear Admiral Oleg Zhuravlev told that the Syrian regime declared the air space over Idlib closed in response to the downing of two Syrian warplanes and killing 19 Syrian soldiers in Turkish drone strikes the first day of an escalating offensive against the Damascus government in Idlib. Turkish aircraft also struck the Syrian military’s al-Nayrab airport on the outskirts of Aleppo city.

As Syrian forces have no chance of winning in an open clash with Turkey, Recep Tayyip Erdogan will visit Russia on March 5 for a one-day trip with a trump card of his own. In their February 28 phone call, both the Turkish and Russian leaders agreed to meet in person. On the same day, a Russian delegation met with Turkish officials in Ankara to discuss the latest situation in Idlib, though in vain. Earlier, Erdogan said he would meet Russian, French, and German counterparts on March 5 in Istanbul –– as the four leaders had gathered to discuss tensions in Syria back in October 2018 –– but Vladimir Putin unceremoniously rejected the idea. A few days later, the Russian leader agreed to hold a face-to-face meeting with Erdogan –– but in Russia, not Turkey. “Russia attaches great importance to cooperation with our Turkish partners,” Kremlin spokesman Dmitry Peskov said on March 2, adding Moscow supports Syria in its “fight against terrorism.” In Syria, like in Libya, Putin and Erdogan are playing up a game consisting of mutual threats, military provocations, and negotiations. The Moscow meeting may have far-reaching effects for the situation in the Middle East since late January when Russia vowed to reach a truce in Idlib right after Erdogan and Putin had formally inaugurated the TurkStream natural gas pipeline. The promise was yet empty, as Moscow renewed air strikes only a few days later, allowing Syrian forces to claim more territorial gains in the country’s last rebel-held stronghold.