Visegrad Group and Prevention of Mass Irregular Immigration to Europe

The Visegrad Group’s approach to migration is often described by West European journalists, intellectuals and politicians as nationalistic, populistic and xenophobic. This narrative contributes to the view that the post-communist societies of Central and Eastern Europe are somehow uncivilized, backward and underdeveloped.

In other words, free riders hungry for EU subsidies, but unwilling to provide any solidarity when asked. While we can accept that the V4 countries are still working towards some standards common in Western Europe and indeed many developments in the V4 are up for debate and criticism, the stance on migration is a whole different matter.

First of all, we have to distinguish between general approach to immigration and foreigners, and attitudes towards mass irregular immigration from the Middle East and Africa experienced during the 2015–2016 crisis. In terms of the overall attitude, we can detect lesser openness to migration in the V4 societies compared to those in Western Europe. This reluctance, however, should not be characterized as being hostile towards migrants altogether. For example, consider the Czech Republic, which has an even higher number of foreigners from outside the EU living in the country than the Netherlands[1] does. On the other hand, when it comes to the recent experience of a sudden uncontrolled influx, there is an overwhelming consensus in the V4 societies and across their political representations that this is unacceptable and must be prevented. Therefore, it is possible to say that in contrast to other points of criticism directed against the V4 countries, the restrictive approach to mass irregular immigration to Europe is a result of a conscious thoughtful decision of the V4 societies, and certainly not a mere populist impulse of one self-serving party or leader.

Prevention of mass irregular immigration to Europe should be a top responsibility of EU policy makers. It is not enough to note that „the number of detected illegal border crossings has been brought down to pre-crisis levels, and that the overall downward trend is continuing” as the European Council comprised of presidents and prime ministers of EU member states stated in December 2018. Although we are not experiencing the kind of influx experienced in the 2015–2016 period, the momentary situation should not distract our attention from the long-term trends and overall migration potential – especially from Africa. In fact, the EU has not yet built a robust system for the prevention of the next potential influx of migrants and it lacks the political consensus to do so. While most of the West European politicians have gradually adopted the position that the key to the migration crisis lies in the regions of origin of the migrants – from the beginning articulated by the Visegrad Group leaders – this notion has not yet fully taken root in the European policy debate, let alone policy implementation. As a consequence, the European Union, almost three years after the crisis, is still terribly vulnerable to migration shocks in its immediate neighborhood.

When EU leaders ordered the Council of Ministers and the European Commission to swiftly explore the concept of „regional disembarkation platforms” in June 2018, it gave a promising signal that migration management is finally moving closer to the regions of origin. The idea of regional disembarkation platforms is to search and rescue migrants close to the African coast of the Mediterranean to more effectively protect their lives and prevent them from irregularly traveling to the European coast. Along with the concept of Return Centers, situated outside the EU, where illegal migrants would be effectively removed from the European territory, the disembarkation platforms are the key to discourage irregular immigration and effectively preventing mounting numbers of illegal residents in EU member states[2].

Unfortunately, the European Commission failed to deliver on the political direction given by the EU summit. The Austrian EU Council Presidency also was not successful in advancing the concept of disembarkation platforms and in the end, the 2018 December European Council, which should have evaluated the progress of implementing the EU policy on migration, did not even mention disembarkation in its conclusions. It is a clear sign that building an effective preventive infrastructure already along the migratory routes in Africa does not receive enough political support among EU leaders, without which it simply cannot progress. However, lobbying for it should be a top priority for the V4 and a coalition of other like-minded countries, because as long as this preventive infrastructure is not built, mass irregular immigration to Europe will continue in uneven waves and the idea of mandatory quotas will keep resurfacing.

The use of V4 diplomacy or strategic communication when communicating with West European policy makers and opinion leaders is not sufficient to advocate for „externalization”. It is also indispensable to patiently and constructively keep explaining why other alleged „solutions” or „right” approaches are in fact illusory, naïve or inadequate. Let us take a closer look at some of the most common cases.

The most prominent and dangerous claim we often hear in the European debate about migration by both experts as well as politicians is a statement that, in fact, there is no solution to mass irregular immigration to Europe. According to this view, EU member states should simply accept the rising inflow of irregular migrants and focus on their redistribution and integration into European societies. Moreover, this approach argues that irregular immigration should be legalized as it provides a desired supply of labor and enriches the diversity of ageing European societies. Even though proponents of this approach are increasingly more careful with their public articulation of this view, having awareness of the overall shift in the public and political mood in Europe since the migration crisis, we still see very explicit examples of it. 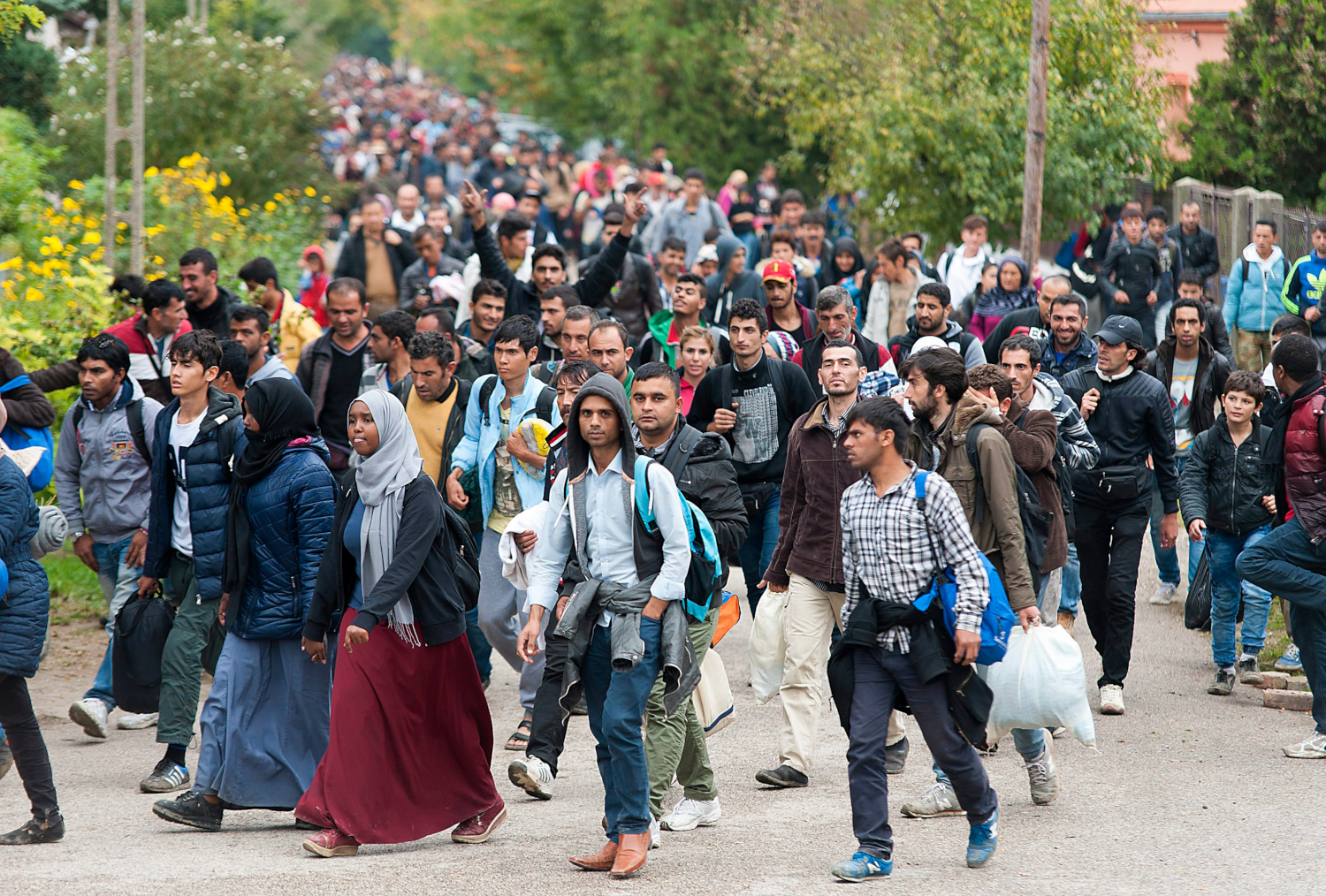 Hungary, October 7, 2015. Migrants walk in a street after they arrived by train in Hegyeshalom, 169 kilometres west of Budapest, at the Austrian border, Hungary. © Csaba Krizsan (PAP/EPA)

Most notably the EU Commissioner for Migration and Home Affairs Dimitris Avramopoulos  assured us that immigration is „not a problem to solve or a challenge to address”, but rather a phenomenon that cannot be stopped, but only managed[3]. In his article he fails to clearly distinguish between legal and illegal, regulated and mass immigration, but calls upon Europeans to accept migration, mobility and diversity, and to encourage everyone to think accordingly. Such statements not only stand in contradiction to EU basic treaties which state that „the Union shall develop a common immigration policy aimed at ensuring … prevention of, and enhanced measures to combat, illegal immigration …”[4], but even serve as a declaration of surrender to smugglers and an open invitation to any potential illegal migrants.

Another claim we hear implicitly or explicitly from opponents of robust preventive measures against irregular immigration is that it is not necessary, because there will be no more mass influx. This view does not advocate for the legalization of irregular immigration, but rather advocates to reach deals with third countries which will allow for effective returns of irregular immigrants in exchange for resettlements of legal immigrants, e.g. the one-for-one model applied in the statement between the EU and Turkey. However, this approach could only work under two preconditions: (a) if the number of arriving irregular migrants would remain within acceptable figures (i.e. up to tens of thousands), and (b) if the respective third country would have enough potential migrants who would qualify for legal resettlement. Both conditions are very unlikely to hold simultaneously and continuously. Reliance on the prediction that future mass influxes of migration are unlikely is rather irresponsible given the trends and migration potential, especially in Africa.

The population of Africa itself is expected to grow rapidly in the coming decades. The UN estimates that more than half of the anticipated growth in global population between now and 2050 is to occur in Africa. Between 2017 and 2050, its population is set to increase by 1.3 billion (!). Additionally, the UN predicts that after 2050, Africa will be the only region still experiencing substantial population growth[5]. The working age population in Africa will grow significantly and the number of people attempting to reach Europe to pursue higher living standards will increase in correlation. The trend of increased migration to advanced economies is, therefore, expected to continue and increase in intensity[6]. Various surveys show that approximately one third of the African population would like to leave the continent, with Europe being the primary destination of choice[7]. Therefore, dismissing the likelihood that a major influx of immigration will occur is very irresponsible a naïve.

Finally, we can constantly hear the mantra regarding „legal channels”. Their proponents present introduction of various new legal pathways for migrants as a silver bullet which will eradicate irregular and illegal immigration. While legal channels for economic migrants with appropriate permission and for „invited refugees” through resettlement programs are an important complementary measure, they cannot by any stretch of the imagination replace irregular channels. Just consider mere arithmetic: the EU member states made 973,800 asylum application decisions in 2017 and 54.5% of the applications were rejected[8], which makes 530,000 illegal immigrants who should be returned. According to the logic of „legal channels instead of illegal routes”, an equivalent of 530,000 legal economic immigrants should be received by the EU member states.

The problem here is twofold. First, there is no indication to expect that an equivalent number of qualified migrants fulfilling all necessary conditions would be available in the illegal migrants’ home countries such as Nigeria, Guinea or Mali. Second, it is highly unlikely that the EU labor market will be in demand for legal economic migrants from just these countries at this specific moment. This does not rule legal channels entirely out. They are, and will continue to be, an important part of the policy mix, but can by no means be considered a solution to irregular immigration as these are two overlapping but mostly parallel phenomena.

As we have demonstrated these three frequent claims – ‘there is no solution’, ‘there will be no more mass influx’, and ‘legal channels will solve it’ – are illusory. They are not only false, but dangerous as they are diverging the attention of EU experts and policy makers away from working intensively on creating a robust preventive infrastructure for the prevention of irregular mass immigration to Europe. The core stones of this system should be the regional disembarkation platforms and Return Centers outside EU territory. Should the Visegrad Group and other like-mined EU member states be successful in avoiding the resurfacing of the idea of mandatory quotas, they need to be able to constructively advocate for the preventive system as well as patiently explaining pitfalls of the aforementioned illusory claims.

[1] In 2017 the Czech Republic had 2.9% of foreign population, whereas the Netherland had 2.4%; comp. Non-national population by group citizenship, Source: Eurostat, January 1, 2017, https://ec.europa.eu/eurostat/statistics-explained/images/3/3c/Non-national_population_by_group_of_citizenship%2C_1_January_2017_.png, (accessed: January 8, 2019).

[2] In more detail the disembarkation platforms and Return Centres are introduced in the context of further measures in the regions of origin in the discussion paper by Radko Hokovský (ed.), Prevention of mass irregular immigration to Europe, European Values Think–Tank, Prague 2018, http://www.homeaffairs.cz/wp-content/uploads/2018/11/PREVENTION-OF-MASS-IRREGULAR-IMMIGRATION-TO-EUROPE.pdf, (accessed: January 8, 2019).